Voting rights activists, on the defensive this year in the face of a wave of restrictive new voting laws, grappled on Thursday with new guidance from the Supreme Court signaling that the challenge will be even steeper now for opposing these laws in court.

The 6-to-3 ruling established a series of “guideposts” for what could potentially constitute a violation under Section 2 of the Voting Rights Act, appearing to limit one of the few paths Democrats and activists have for mounting legal challenges to new measures currently being proposed and passed in Republican-controlled states.

“The test is more difficult to meet than Congress intended when it passed the act and that is necessary to meet the moment, in terms of the number of states and local governments out there designing racially discriminatory electoral rules,” said Chad Dunn, the co-founder of the Voting Rights Project at the University of California, Los Angeles, and a former election lawyer. “So on that point, I think the dissenting justices got it exactly right: The test is too restrictive.”

There are other legal avenues to challenge restrictive voting laws besides the Voting Rights Act, including under the First, 14th and 15th Amendments to the Constitution. But the act has been paramount in helping to rein in laws that could disproportionately affect communities of color, and the decision could threaten some of the legal strategies that voting rights groups and election lawyers have been drafting to challenge some of the new laws.

Mr. Dunn noted that the court’s decision on Thursday did not invalidate or significantly hollow out Section 2 of the Voting Rights Act. “I do think the test will work to stop a lot of discriminatory electoral practices,” he said. “And that part is good news.”

President Biden said he was “deeply disappointed” in the court’s ruling and said it would cause “severe damage” to the federal government’s ability to protect voting rights. He again urged Congress to enact new protections for voting.

“The court’s decision, harmful as it is, does not limit Congress’s ability to repair the damage done today,” Mr. Biden said. “It puts the burden back on Congress to restore the Voting Rights Act to its intended strength.”

At least three major cases involving Section 2 claims are in the federal court system, according to a database of election litigation maintained by Ohio State University. One of those cases is a lawsuit that the Justice Department filed last week against Georgia, claiming that the state’s new omnibus voting law, S.B. 202, is racially discriminatory in both its intent and its impact.

While the case was brought under Section 2, some election lawyers said that it was unlikely to be derailed by the court’s decision on Thursday.

“There’s two ways to prove a Section 2 case — you can show there’s purposeful discrimination, or you can show that the law at issue had a discriminatory effect,” said Tom Perez, the former chairman of the Democratic National Committee and former chief of the civil rights division of the Justice Department. “The court narrowed the effects test. The purpose claims are unchanged, and the Georgia case is a purpose case. The Georgia cases that were recently filed, they include claims of intentional discrimination and they include constitutional claims.” 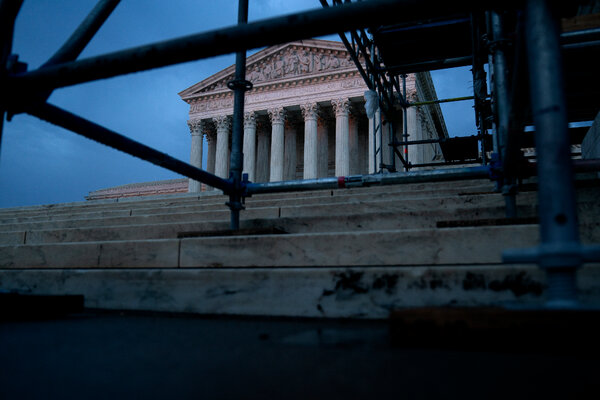 Republicans said the court’s ruling would serve as a green light for G.O.P. state legislators to pursue addition restrictions on voting.

“Rhetorically, it will provide them a shield to say, ‘What we’re doing is perfectly legitimate, the Supreme Court lets us do it,’” said Benjamin L. Ginsberg, a veteran Republican election lawyer. “What’s important to look at in that opinion is what the court looks at in the usual burdens of voting. You have to be halfway informed about where your polling precinct is. If a bunch of people can’t figure out where their voting precinct is, that doesn’t mean you have to lesson common-sense protections to help them.”

The conservative Heritage Foundation, which along with its political arm, Heritage Action, has for years advocated making voting harder, said that states should follow Arizona’s lead in enacting tougher voting laws.

Garrett Bess, the vice president of Heritage Action, called the Supreme Court’s decision “an enormous win for election integrity and voter confidence.” He added: “State officials across the country should take note and work to enact similar policies in their states.”

Since the November election, at least 22 new laws in 14 states have been enacted that impose new restrictions on voting, alarming Democrats and voting rights groups who say the measures are a threat to one of the pillars of democracy. So far, Democrats have had little recourse as states like Georgia, Florida and Iowa pass new laws, other than to file lawsuits and mount aggressive voter education campaigns on the issue.

The two provisions of Arizona law at the core of the Supreme Court decision on Thursday were increasingly common restrictions on voting that have appeared in other states. One law banned third parties from helping voters in dropping off their absentee ballots, a process Republicans derisively refer to as “ballot harvesting” but that is designed to help older, sick or otherwise disabled voters with handling their ballot. The other law canceled all votes cast in person at the wrong precinct.

At least 22 states have passed or introduced a law restricting ballot collections, according to a database maintained by the Voting Rights Lab, a liberal-leaning voting rights group. And one of the provisions in Georgia’s law would bar any voter from being allowed to vote provisionally at the wrong precinct before 5 p.m.

Rushes of similar legislation have followed Supreme Court rulings on voting laws in the past. After the Court upheld an Indiana voter identification law in 2008, numerous other states, including North Carolina, Texas and Pennsylvania, sought to pass similar laws.

Jen Jordan, a Georgia state senator who is seeking the Democratic nomination for state attorney general, said the ruling on Thursday would make it more difficult to bring legal challenges against the state’s new voting law, known as S. B. 202, because it would be necessary to prove that Georgia Republicans intended to make it harder for people of color to vote, rather than that being the effect of the new law.

“It’s very difficult to gather enough evidence or appropriate evidence to show actual intent,” she said, “and that seems like the only way you can do it now under the V.R.A.”

Even as some voting rights groups noted that it was not a worst-case scenario ruling, Democrats around the country were quick to deride the decision by the Supreme Court, which broke down along the court’s 6-3 ideological divide, and vowed to redouble their efforts to pass federal voting legislation.

“Today’s Supreme Court decision reinforces what we already know: Voting rights are under assault in America and we must act with the fierce urgency of now to end the era of voter suppression once and for all,” said Representative Hakeem Jeffries, a New York Democrat who is the chairman of the House Democratic Caucus.