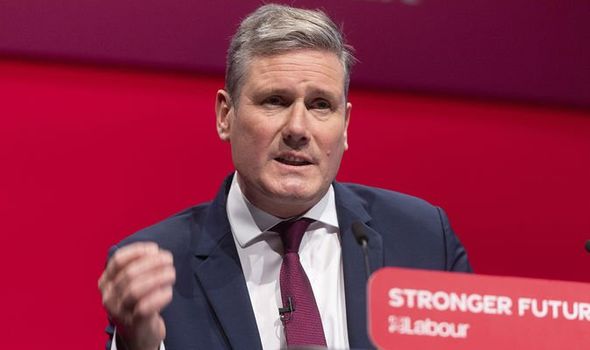 In his first conference speech in person, which was frequently interrupted by protesters, the party leader promised to replace hard-Left policies rejected by millions of voters with “a sensible plan for Government”.

He vowed to be tough on crime, to prioritise education and to back enterprise.

And, distancing himself from the extremism of his double electionlosing predecessor Jeremy Corbyn, he insisted: “We are the patriots.”

His 90-minute address to the annual conference in Brighton infuriated the Left-wing supporters of Mr Corbyn and his allies.

In what appeared to be a co-ordinated attempt to disrupt the speech, several delegates repeatedly heckled the Labour leader and shook red sheets of paper at him.

Sir Keir faced down the protests, saying the party needed to “get our own house in order” and insisting that the heckling “doesn’t bother me”.

He claimed the protesters were “shouting slogans rather than changing lives”.

The Tories branded the conference “chaotic” following clashes between the leadership and Left-wing grassroots throughout the week.

Party officials blamed a “small number” of diehard opponents of the leadership for the disruption and insisted the protests had not been a distraction from the message.

Sir Keir, 59, used the speech, the longest for many years at a Labour conference, to set out his vision for the country and his pitch to be the next prime minister.

He launched a series of scathing attacks on Boris Johnson, seeking to contrast himself as a “serious” politician with the “trivial” premier.

He also dragged up a past joke by Mr Johnson describing himself as a “blithering idiot”.

Sir Keir said: “I don’t think Boris Johnson is a bad man. I think he is a trivial man. He’s a showman with nothing left to show. He’s a trickster who has performed his one trick.

“Once he had said the words ‘Get Brexit Done’ his plan ran out. He has no plan.”

In a striking switch from Mr Corbyn rubbishing Labour’s past, Sir Keir repeatedly praised the last Labour government of Mr Blair and then Gordon Brown. And making a deliberate nod to the Blairite slogan promising “education, education, education”, the Labour leader said: “Education is so important I am tempted to say it three times.” He also sought to bring back the patriotic language of the New Labour era and spoke of being “proud” of the Armed Forces.

Sir Keir kept specific policy announcements to a minimum. But he did promise that a Labour government under his leadership would launch “the most ambitious school improvement plan in a generation” and increase investment in support for mental health.

His words were enthusiastically applauded by the overwhelming majority of delegates. Many also attempted to shout down the Leftwing protesters.

Having been denied a full conference speech last autumn due to the Covid crisis, Sir Keir used yesterday’s address to try to fully introduce himself to Labour members and the electorate.

In several highly personal passages, he spoke of his pride in his father’s achievements as a toolmaker and his mother’s NHS service as a nurse, and of his sadness at her battle with a debilitating disease in later life.

Seeking to contrast himself with the Prime Minister, he said: “I am not from a privileged background.”

Sir Keir also sought to cast himself as a Westminster outsider, claiming: “I am not a career politician. I came to politics late in life and I don’t much like point-scoring.”

The former director of public prosecutions and head of the crown prosecution service spoke at length about his career as a high-flying lawyer and how it gave him a commitment to justice.

Before walking on to the stage, Sir Keir was introduced to the conference by Labour peer Baroness Doreen Lawrence, who spent years campaigning for justice after the racist murder of her 18-year-old son Stephen in 1993.

At the end, he was joined on the platform by his wife Victoria as delegates gave him a standing ovation.

He added: “It is clear Sir Keir Starmer’s party is more divided than ever and has no plan. Labour spent five days talking to themselves about themselves instead of to the country.

“From resignations to their union backers deserting them, to disrupting their leader’s speech,

Labour are too preoccupied fighting amongst themselves to put forward a plan for our country.

“Only the Conservatives are getting on with the job to build back better.”

The Labour leader is clearly not a politician to use one word where several thousand will do.

Last week, Sir Keir Starmer served up a 12,335-word essay and yesterday followed up with a conference speech breaking all records for length.

For the first 40 minutes or so, his precise, measured oratory was a marked improvement on the tedious tirades offered by the last three or so holders of his job.

But as the hour-mark passed with no sign of the ex-barrister’s peroration on the horizon, yawns were stifled and stomachs rumbled in the media pen.

Labour delegates were less concerned about the speech eating into the luncheon hour.

Most listened attentively as their leader set out his pitch to be a “serious” and “sensible” alternative to Boris Johnson, who he mocked as trivial and tricksy.

Yet some of Sir Keir’s jibes were of dubious taste. He joked that the Prime Minister’s father Stanley could, like his own dad, be described as a “tool maker”.

Coming days after the Prime Minister attended his mother’s funeral, taking a swipe at one of his parents seemed indelicate.

And earlier in the conference Sir Keir claimed he did not use the sort of salty language deployed by deputy Angela Rayner.

Length and dodgy jokes aside, Sir Keir delivered an assured and well-constructed speech. He told the story of his upbringing and legal career to illustrate where his Labour values came from.

He was helped out by the infantile behaviour of a few Lefty hooligans who repeatedly tried to shout him down. Their ineffective squawking added to the impression that Labour is shedding its lunatic fringe at last.

Certainly, there were far fewer sandals and Karl Marx beards in the conference hall compared with two years ago. Most delegates in the hall enthusiastically cheered Sir Keir’s jettisoning of the Corbynite baggage.

Smirking Labour aides blamed clapping for the leader’s time on stage, saying: “We hadn’t accounted for so much applause.”

But, for all the lurching away from the Left, delegates still belted out The Red Flag anthem with gusto. But by then, Sir Keir had slipped away.