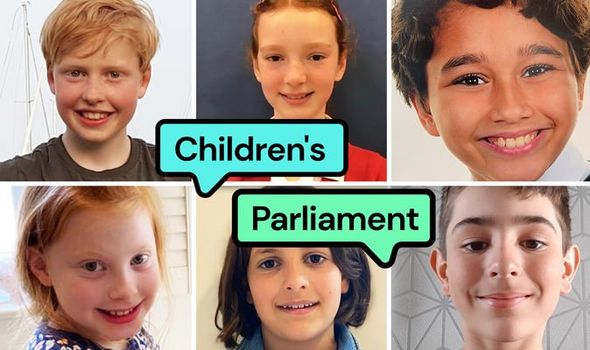 A Children’s Parliament will be held this Friday – and live-streamed on Express.co.uk – in which up to 600 “Child MPs” will conduct a parliamentary-style debate focused on the threat to their futures. Ahead of the event 10-year-old Nathaniel Craske of Holy Cross Catholic Primary School in the West Midlands stressed that young people should feel “empowered to do something to make a positive change.” And nine-year-old Eddie Bond from St Annes Primary in Greater Manchester added: “I think young people should get involved so they can feel they are helping, even if only small.”

Brooke Hill Academy student Florence Nichols, 10, believes that attempting to reach crucial emissions targets is one of the most important tasks.

She said: “I think that we should at least try our best to reach no carbon emissions by 2050 but if we can’t get to zero then we would at least produce less than before. I also think that all countries should be involved, but even if they do not we should still make it our number 1 priority.”

Ten-year-old child MP Oscar Pocknell, from St Margaret’s Primary School in Devon, has spoken of the difference each individual can make when considering a more eco-friendly life.

He said: “I try to lead by example for my younger sisters by turning the lights off when nobody is in the room.

“I also use the shower more than a bath to save wasting energy.”

Oscar holds an admirable attitude towards how young people approach climate change, which can often be an overwhelming prospect.

He commented: “Rather than thinking what will happen if we don’t fix climate change, we are thinking about the positives of making the changes.

“It will help our health, save the planet, protect our oceans and save animals’ lives.”

She said: “I am worried that there will be many animals affected by global warming.

“Where the temperature used to be cold, it is not that cold any, so many animals will not be able to survive with this higher temperature and move to colder regions.

“In this new region, the animals will now be affected because new animals are there.

She infused her message to world leaders with no small measure of urgency, saying: “I see the future to be bleak if we don’t act now.

“Our air will be more polluted, we will have less wildlife, fewer trees, polluted soil.

“The effect will be more natural disasters and extreme weather.

“Humans, animals and plants will suffer if we don’t stop climate change.”

Year 5 student at Valley Primary School in Bromley, Thea Lashbrook, emphasised the need to conserve trees and areas of woodland.

She added: “Yes, we do need to plant more and stop chopping them down, too!”

Steven Abrahams, from Microsoft Teams, which is sponsoring the Children’s Parliament event, said: “It’s important to give children a voice when it comes to their future, and we’re looking forward to hearing all of the things they have to say about these critical topics.”

The fantastic venture is also backed by the Daily Express, after the incredible success of the Green Britain campaign earlier this year. Children’s Parliament is also partnering with online education platform Wakelet.

The Children’s Parliament will take the form of a fully-fledged Parliamentary debate, with half of the children representing Her Majesty’s Government and the other Her Majesty’s Loyal Opposition.

The ninety-minute virtual session will focus primarily on climate change, but will also touch on key topics like COVID-19 and the future capabilities of technology.

The late Sir David Amess MP, who was murdered earlier this month during a constituency surgery, was a champion of the Children’s Parliament.

He said of the event: “There’s no doubt our young people have opinions on the issues that matter to them.

“It’s important their views are noticed and given a platform for debate, not least so the youngsters themselves have the opportunity to listen to and learn from their peers.”

The Children’s Parliament will be shown live at Express.co.uk on Friday at 5pm.

To register a child to participate in the event please visit https://wakelet.com/@childrensparliament