Brexit: Dan Wootton clashes with guest over deal with EU

The bumper bill will still leave the UK with a massive £26.6 billion left to pay under the terms of the withdrawal deal, the Commission says. Brussels’s calculation for this year’s payment is almost £3 billion higher than that forecast by the Office for Budget Responsibility.

It will swell the bloc’s coffers at a time when the UK and other European states are battling rising inflation and a cost of living crisis.

It had been expected the cost would rise because of the weakening of the pound against the euro, which the settlement is paid in.

The Treasury puts the final tally of the divorce bill at £35 billion to £39 billion, whilst the Commission has priced it slightly higher at £41 billion.

It was agreed in 2019 and covers money that the UK had already pledged to EU schemes as a member, plus the pensions of British officials. 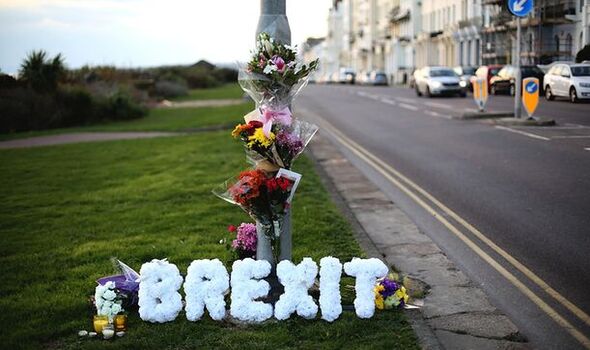 But ministers have confirmed the cash is not ring-fenced and goes into the bloc’s general budget, meaning Eurocrats can use it how they wish.

It comes amid an ongoing row in Cabinet which could derail efforts to get rid of EU laws in the next decade.

Jacob Rees-Mogg, the Brexit opportunities minister, has been pushing for Brussels red tape to be axed by June 23 2026, which would be the 10-year anniversary of the referendum.

Discussions are underway about inserting “sunset clauses” into the Bill – whereby a deadline would be set for EU laws to expire – with various dates under consideration.

As well as the 10-year anniversary of the referendum, another is January 31 2030, which would mark a decade since Britain left the EU.

But following push-back from within Cabinet, Brexiteers now fear that plans for a hard deadline will be watered down.

A government source told The Guardian: “There’s a big internal fight going on over the Brexit Opportunities Bill on sunset clauses.

“The Treasury are moaning and saying that we have to preserve loads of EU law, especially on taxation.

“BEIS and Defra are saying we can’t sunset secondary legislation. It is possible Jacob will still win but there is Cabinet opposition, he is losing the battle”.

The Brexit Opportunities Bill, aimed at making it easier for EU laws to be removed from the statute book, will be published later this year.

There are around 20,000 such pieces of legislation, according to estimates from the House of Commons library.

Earlier this month, George Eustice, the Environment Secretary, wrote to Mr Rees-Mogg to say that “messing around” with some rules would mean an additional cost to businesses and be a waste of civil servants’ time.

A decision is expected imminently, with a Whitehall source insisting that the Prime Minister is “very supportive” of setting a deadline as soon as possible.

The source added: “Some departments are being more obstructive than others.”