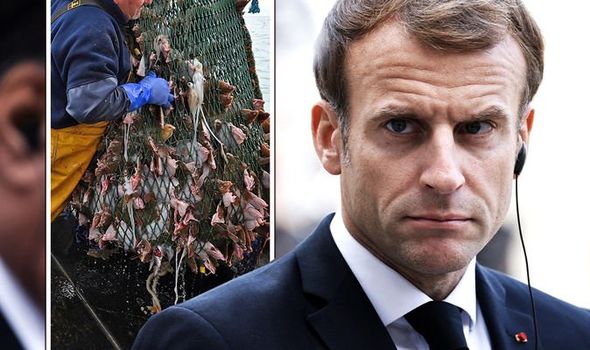 The decision comes after Britain and the Channel Island of Jersey refused dozens of French fishing boats a licence to operate in their territorial waters.

Jersey refused 75 licences to French fishing vessels to access its waters after October 31.

Speaking last week, France’s maritime minister Annick Girardin said: “On every subject, the British are dragging their feet or failing to live up to their commitments.”

Political commentator John Lichfield warned that a clash between France and the UK was going to happen.

He said: “What Macron doesn’t seem to have considered is that a cross-Channel war may be precisely what Johnson wants.

“There is nothing that the embattled British government would like more than to change the subject — to noyer le poisson — and distract the public from its self-inflicted energy and supply chain crises with an old-fashioned battle with the wicked French.”

The EU are set to announce a series of proposals today on how the Northern Ireland Protocol following Brexit is to be dealt with.

European Commission vice president Maros Sefcovic had said that the new measures were “very far-reaching” and would aim to tackle the issues put forward by the UK.

Brexit Party MEP, Ben Habib had recently wrote for Express.co.uk that a trade war was the last resot for the UK.

He wrote: “Lord Frost is rightly refusing to budge on his demand that the Court of Justice of the European Union be removed from the Northern Ireland Protocol.

“Doing so would likely automatically cease Northern Ireland’s membership of the EU’s customs union; put the customs border where it should be and has been for over 100 years; as well as remove the province from over 800 EU regulations.”

Former MEP, Martin Daubney defended calls for a trade war with the EU as Mr Daubney claims the EU are bullying the UK.

He said: “The EU has its boot to our throat & it’s time for a full-on trade war.”

Mr Daubney felt the first place which should be focused on as part of the trade war is France.

He added: “First target should be France: threatening to switch off power to Jersey, to blockade Calais, they turn a blind eye to illegals & plunder our fish.”