The Prime Minister spoke to President Rouhani this afternoon as he called on the Islamic Republic to free the deal British national who has been imprisoned since 2016. Iran accuses Ms Zaghari-Ratcliffe of being a British spy trying to overthrow the Government in 2016, while she insists she was only in the country on holiday.

A No10 spokesman said: “The Prime Minister spoke to Iranian President Rouhani this afternoon.

“The Prime Minister raised the case of Nazanin Zaghari-Ratcliffe and other British-Iranian Dual Nationals detained in Iran and demanded their immediate release.

“He said that while the removal of Nazanin Zaghari-Ratcliffe’s ankle monitor was welcome, her continued confinement remains completely unacceptable and she must be allowed to return to her family in the UK.” 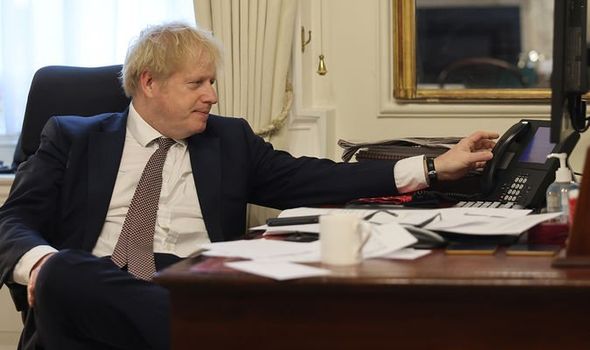 On Monday Ms Zaghari-Ratcliffe had her ankle tag removed after serving her five-year sentence.

She has not been allowed to leave the country because she is facing a new court case on Sunday with fresh charges brought against her.

Foreign Secretary Dominic Raab has previously criticised Iran for continuing to “put her and her family through a cruel and an intolerable ordeal”.

Richard Ratcliffe’s, Nazanin’s husband, earlier this week said he remained “guarded” ahead of the new trial.

“It feels to me like they have made one blockage just as they have removed another, and we very clearly remain in the middle of this government game of chess,” he said.

“I don’t think we expected something clean but how muddy this is I’m not quite sure yet.”

Ms Zaghari-Ratcliffe was first arrested in April 2016 when she travelled to Iran to visit her parents with her todler, Gabriella.

The young daughter, who is now six years old, only returned to the UK and saw her father for the first time in three years in 2019.

The new charges being levelled against her follow a gaffe made by Mr Johnson when he was Foreign Secretary in 2017.

Mr Johnson incorrectly told a Parliamentary select committee the dual-British national was teaching journalism when she was arrested in Iran.

He later apologised for misspeaking, but the remarks are understood to be being used to support the new charge of “propaganda against the regime”.

“The British Government has no doubt, the Ms Zaghari-Ratcliffe was on holiday and that was the sole purpose of her visit,” Mr Johnson told the Commons when correcting his statement in 2017.

“I apologise to Ms Zaghari-Ratcliffe and her family if I inadvertently caused them any further anguish.”