A government minister has condemned Millwall fans who booed as players took the knee in support of the Black Lives Matter movement – but said he would be “uncomfortable” with action being taken against supporters.

The jeering happened at the start of Millwall’s match against Derby County on Saturday, when players made the gesture in what has now become a regular pre-game ritual in English football.

It was the first time Millwall fans had been able to attend a game at their south London stadium since the beginning of the coronavirus crisis in March. 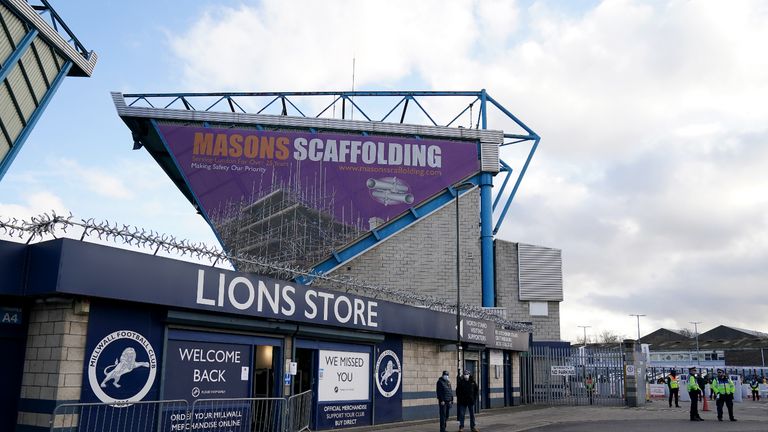 The Championship club have said they were “dismayed and saddened” by their fans’ behaviour.

And Foreign Office minister James Cleverly joined the criticism as he branded the booing “wrong”.

“I think it was wrong and the people who did it should just think a little bit about the message they send about what is our national game.”

Mr Cleverly said he would be “a bit uncomfortable” with action being taken against those among the 2,000 Millwall supporters who booed.

“But I think the message should be really, really clear – unacceptable, totally unnecessary,” he added.

“There are players on the pitch and more widely doing something they believed strongly sent a positive message about their fight against racism.

“And booing that, I think, is just wrong.” At the weekend, Environment Secretary George Eustice – when asked about the events at Millwall – described Black Lives Matter as a “political movement that is different to what most of us believe in, which is standing up for racial equality”.

Asked about his fellow minister’s comments, Mr Cleverly said that “elements” of Black Lives Matter are “drifting towards the political sphere”.

“I think the broader point that many, many people are trying to make, which is absolutely right, is the UK is a country that stands in opposition to racism,” he said.

“That is absolutely right. I do think some people involved with the Black Lives Matter movement – particularly in the centre of it – have said and done things that I believe to be counterproductive.

“But the broader agenda is obviously the right thing to do.

“My mother is from West Africa, of course we want to see racism eradicated in the UK.

“But, as I say, I sometimes think some of the words and actions are counterproductive to their desired aim.”

Pressed on whether he agreed with Mr Eustice’s characterisation of Black Lives Matter as a “political movement”, Mr Cleverly added: “Clearly some elements are drifting in that direction, which I think in some instances makes it harder for them to deliver what they’re saying they want to deliver.”