WASHINGTON — President-elect Joseph R. Biden Jr.’s intention to nominate a retired Army general as secretary of defense has run into bipartisan resistance on Capitol Hill, where there are growing concerns about another former commander leading the Pentagon in a nation that has a long tradition of civilian control of the military.

Gen. Lloyd J. Austin III, a four-star Army general who retired in 2016, was named on Tuesday by Mr. Biden as his pick — and would be the first Black defense secretary. But General Austin would need a congressional waiver to serve, required for any Pentagon chief who has been retired from active-duty military service less than seven years.

Rejecting a waiver for such a historic nominee could be tricky for lawmakers, especially those who four years ago approved a similar measure for President Trump’s first defense secretary, Jim Mattis, a retired four-star Marine officer. But many lawmakers said Tuesday they do not want the practice enshrined into American political life.

“I have the deepest respect and admiration for General Austin,” said Senator Richard Blumenthal, a Connecticut Democrat who serves on the Senate Armed Services Committee. “His nomination is exciting and historic. But I believe that a waiver of the seven-year rule would contravene the basic principle that there should be civilian control of a nonpolitical military.”

Many lawmakers said they reluctantly voted for a waiver for Mr. Mattis to provide a seasoned counterbalance to Mr. Trump’s inexperience and bombastic style, and now question the need to violate a cornerstone of American national security policy so quickly again. An approval for General Austin would underscore how deeply Mr. Trump has altered the norms in civilian oversight of the military.

“I supported a one-time waiver in the case of Secretary James Mattis with the belief that the circumstances at the time warranted a rare exception, not the establishment of a new precedent, which erodes the basic principle of civilian control of the military,” said Senator Susan Collins, Republican of Maine. “I would need to take a hard look at the Biden administration’s justification for such a waiver before reaching a conclusion on whether or not one is warranted in this case.”

The chairman of the Armed Services Committee, Senator James M. Inhofe, Republican of Oklahoma, said on Tuesday that he did not see an issue with the waiver. General Austin has several weeks to make his case to lawmakers, which many on Capitol Hill and in the military policy community believe he can do successfully. Mr. Inhofe’s nod will be important. And, as was the case with Mr. Mattis, it is possible that General Austin will receive more support from Republicans than Democrats.

Congress and the American public historically have been unwaveringly opposed to the military operating outside the control of civilian authorities, something common in authoritarian and unstable regimes. General Austin would be only the third defense secretary in American history to receive such permission, the first being George C. Marshall in 1950.

Both the Senate and the House must approve a waiver, but only the Senate votes to confirm the nomination.

Mr. Biden could have selected another prominent Black candidate, Jeh C. Johnson, a former homeland security secretary and Pentagon general counsel, who is an accomplished Washington insider. But officials familiar with Mr. Biden’s thinking said he saw General Austin as a safe choice — steady, low-key and risk-averse — as well as someone he has known and worked with since the general was the top commander in Iraq a decade ago.

“General Austin has demonstrated exemplary leadership, character, and command,” Mr. Biden said in a statement on Tuesday. “He is uniquely qualified to take on the challenges and crises we face in the current moment, and I look forward to once again working closely with him as a trusted partner.”

In a longer essay in The Atlantic published on Tuesday, Mr. Biden said General Austin’s experience in drawing down 150,000 troops from Iraq would serve him well in the military’s effort to distribute vaccines for the coronavirus, and urged Congress to approve the waiver.

“I respect and believe in the importance of civilian control of our military and in the importance of a strong civil-military working relationship at DoD — as does Austin,” Mr. Biden wrote, using the initials for Department of Defense. “Austin also knows that the secretary of defense has a different set of responsibilities than a general officer and that the civil-military dynamic has been under great stress these past four years. He will work tirelessly to get it back on track.”

Critics of General Austin’s selection said, however, that retired four-star generals do not necessarily make effective civilian secretaries of defense.

“Military service tends to give people excellent organizational skills and knowledge of defense policy, and those who make a career of the military tend to have good leadership skills,” said Kori Schake, who directs foreign and military policy studies at the conservative American Enterprise Institute and served on the National Security Council under President George W. Bush.

But other traits are necessary, Ms. Schake added, noting that “diversity of experience really matters, and bringing nonmilitary skills into the Pentagon improves the quality of analysis, because the building’s already replete with people who have military skills.”

For Mr. Mattis in 2017, only 36 House Democrats supported the waiver, even though it easily passed the Senate. In that vote, Senator Jack Reed of Rhode Island, the senior Democrat on the Armed Services Committee, said Mr. Mattis’s case was a rare exception.

“Waiving the law should happen no more than once in a generation,” Mr. Reed said at the time. “Therefore, I will not support a waiver for future nominees.” On Tuesday, Mr. Reed seemed to back away somewhat from his earlier remarks in an interview with reporters on Capitol Hill. “I feel, in all fairness, you have to give the opportunity to the nominee to explain himself or herself,” he said. 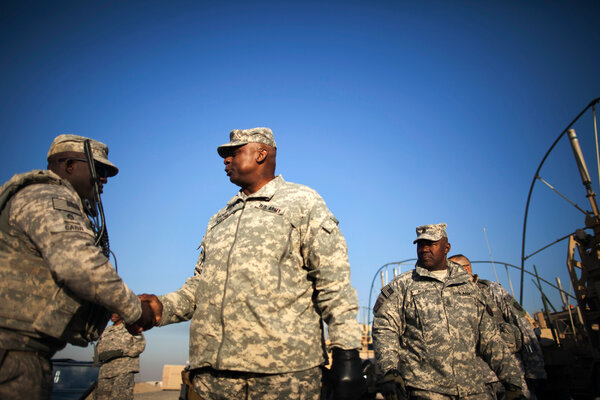 Senators of either party who voted for a waiver for Mr. Mattis might find it difficult to explain why they would then reject one for a nominee who would be the first Black defense secretary.

“We want to make sure he is the right person,” said Senator Joni Ernst, Republican of Iowa. “I did support the one for Mattis; it was hard for me to do, because I do believe that there needs to be some distance between the nominee and their service.”

Senator Josh Hawley, a Missouri Republican who, like Ms. Ernst, is on the Armed Services Committee, told reporters that “I’ve got substantive concerns” about the waiver.

Some lawmakers continued to make the case for Michèle A. Flournoy — a former top Pentagon official whom many in Washington had supported for the job.

“Former generals as SecDef should be the exception not the norm,” Representative Michael Waltz, Republican of Florida and a former Army Green Beret, said in a Twitter message. He praised Ms. Flournoy as qualified on a range of pressing issues, including the defense industrial base and China, and added, “Too bad nominating the 1st female SecDef isn’t ‘diverse’ enough for #Biden and House Dems.”

Representative Elissa Slotkin, a Michigan Democrat on the House Armed Services Committee, said in a statement that she had “deep respect” for General Austin, but noted: “Choosing another recently retired general to serve in a role that is designed for a civilian just feels off. The job of secretary of defense is purpose-built to ensure civilian oversight of the military. ”

Other Democrats on the Senate committee, including Senator Tammy Duckworth of Illinois, a veteran, voted against the waiver for Mr. Mattis and are expected to reject one for Mr. Biden’s nominee.

Several scholars who have studied civilian-military relations, including some who supported a waiver for Mr. Mattis, also say they oppose such a move this time.

“Mattis, like Marshall, was an emergency situation; this isn’t,” said Eliot A. Cohen, the dean of the Johns Hopkins School of Advanced International Studies and a former Pentagon official. “The law prohibiting recently serving officers from serving as secretary of defense is sound, and there are plenty of good civilian candidates. It’s a breach of civil-military norms.”

General Austin, 67, is the only African-American to have headed the military’s Central Command, the marquee combat command, with responsibility for most of the places where the United States is at war, including Iraq, Afghanistan, Yemen and Syria. Mr. Biden spent time during his years as vice president in the White House Situation Room with General Austin and had a level of personal comfort with him that he feels is essential to the role, said people familiar with his thinking.

The Congressional Black Caucus also threw its support Tuesday behind the retired general. “Black Americans have sacrificed their lives for this country in every war since the Revolutionary War,” the caucus said in a statement. “Appointing retired Gen. Lloyd Austin to a position of command and authority over the United States military, second only to the president of the United States, is historic and well deserved.”