WASHINGTON — Republicans on Capitol Hill began lining up on Wednesday against President Biden’s $2 trillion infrastructure plan and the tax increases he proposed to finance it, even as some Democrats suggested that the package was insufficient to address the country’s aging infrastructure and vulnerabilities to climate change.

While most Democrats showered praise on Mr. Biden for the expansive package, the critiques from members of both parties illustrated that infrastructure legislation, once seen as a promising area of bipartisan compromise, is unlikely to sail through this Congress with widespread support from both sides.

Republicans scoffed at the breadth of the plan — which includes traditional public-works projects as well as far-reaching initiatives to tackle climate change and racial inequities in the economy — and condemned Mr. Biden’s determination to pay for it in part with corporate tax increases.

“We cannot begin thinking of bills that spend trillions as the new normal,” said Representative Sam Graves of Missouri, the top Republican on the Transportation and Infrastructure Committee. “The president’s blueprint is a multitrillion-dollar partisan shopping list of progressive priorities, all broadly categorized as ‘infrastructure’ and paid for with massive, job-killing tax increases.”

And early concern among some Democrats suggested that the measure is likely to have a bumpier path to enactment than the nearly $1.9 trillion stimulus legislation, which moved through Congress swiftly with only Democratic votes.

Some liberal lawmakers said the package was too limited. In a statement, Representative Pramila Jayapal of Washington, the chairwoman of the Progressive Caucus, called it “a welcome first step” but said it was “imperative that we act on a once-in-a-generation opportunity to use our governing majorities.”

“It makes little sense to narrow his previous ambition on infrastructure or compromise with the physical realities of climate change,” Ms. Jayapal said of Mr. Biden. “We have a limited window to get this done — we must seize our chance to build back better with economywide investments that work for working families and communities of color.”

With slim House and Senate majorities that leave little room for defections, Democratic leaders now must begin drafting a large and complicated bill including individual proposals for infrastructure projects and other domestic programs as well as changes to the tax code.

Mr. Biden insisted that he wanted the package to be bipartisan, but Republicans have already signaled that they would insist on curtailing it substantially, a step that there is no indication he is willing to take.

“I’m going to bring Republicans into the Oval Office, listen to what they have to say and be open to their ideas,” Mr. Biden said on Wednesday. “We will have a good-faith negotiation.”

Senator Mitch McConnell of Kentucky, the minority leader, said Mr. Biden had called him on Tuesday to discuss the broad contours of the package. But he warned that the proposal “is like a Trojan horse” — a comparison he has deployed repeatedly in both Washington and his home state, where he attended a series of events this week.

“It’s called infrastructure, but inside the Trojan horse is more borrowed money and massive tax increases on all of the productive parts of our economy,” Mr. McConnell said. He said he most likely would not support such a package “if it’s going to have massive tax increases and trillions more added to the national debt.”

Republicans are already gearing up to fight the plan. Marc Short, a longtime aide to former Vice President Mike Pence, has started a new group, the Coalition to Protect American Workers, that aims to raise $25 million to $50 million from conservative donors to defeat the infrastructure initiative.

“When you are talking about tax hikes of this magnitude, I don’t see there being any Republican support on the Hill,” he said.

Girding for that possibility, Senator Chuck Schumer of New York, the majority leader, and other top Democrats have already begun exploring how infrastructure legislation could move quickly in the coming months under the same fast-track budget reconciliation process they used for the stimulus measure. That would protect the plan from a filibuster and enable Democrats to muscle it through the Senate over potentially unanimous Republican opposition.

Democrats believe that Senate rules allow them to pursue at least two more reconciliation measures this year, beyond the one that carried the pandemic aid bill, and Mr. Schumer has asked the parliamentarian, the top rules enforcer, to weigh in on the matter. Democrats have not yet committed to using the maneuver, though Republicans have privately said the request is a sign that their input will not be taken seriously. 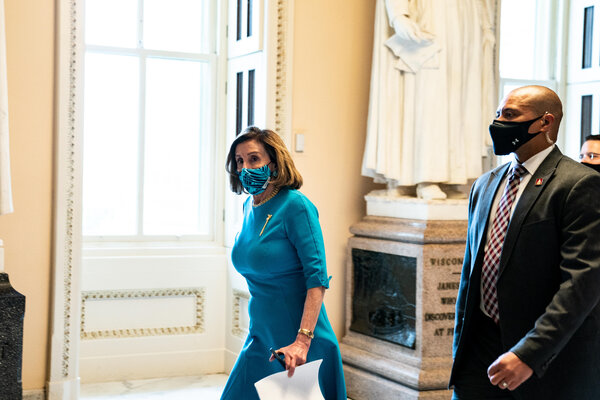 Speaker Nancy Pelosi of California has suggested to Democrats that she hopes to move the plan through the House before July 4, an ambitious timeline that could easily slip as lawmakers rush to iron out the details. Punchbowl News first reported the tentative timeline.

Ms. Pelosi and other top Democrats in both chambers were quick to dole out effusive praise for the president’s proposal after he outlined it in a speech in Pittsburgh on Wednesday. The plan, Ms. Pelosi said in a statement, “is a visionary, once-in-a-century investment in the American people and in America’s future.”

Representative Peter A. DeFazio of Oregon, the chairman of the Transportation and Infrastructure Committee, said the package “makes the kind of investments that I believe we should be making to move our infrastructure out of the 1950s and into the modern era.”

Mr. Biden is expected in the coming weeks to unveil the second plank of his infrastructure proposal, which is expected to focus on what liberal lawmakers have begun to refer to as the nation’s human infrastructure, investing in education, child care, paid leave and tax credits intended to help families.

Democrats will also have to iron out differences among themselves over changes to the tax code to pay for both pieces of Mr. Biden’s plan. Multiple Democrats, including Representatives Josh Gottheimer of New Jersey and Tom Suozzi of New York, have said they will insist on reversing a change included in the 2017 tax overhaul that hurt high earners in states like New York and California.

They want to roll back the limit on the state and local tax deduction, known as SALT, which prevents households from deducting more than $10,000 a year from their federal tax bills.

“Changes to the tax codes that affect families? No SALT, no deal,” Mr. Gottheimer said in an interview on Wednesday. “This is going to be a negotiation, but I believe the White House is open to it.”