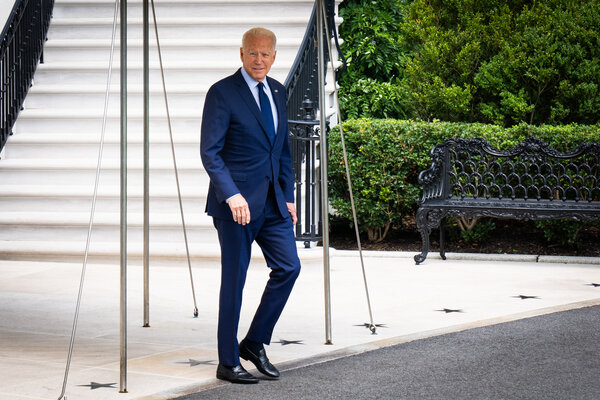 President Biden will use a late-morning speech on Monday at the White House to press Congress to act on both halves of his economic agenda, claiming momentum from an uptick in job growth over the course of his administration and pushing back on Republican critiques of his multi-trillion-dollar spending plans.

In their daily guidance for reporters, White House officials said Mr. Biden would use the speech to champion the nearly $600 billion bipartisan infrastructure agreement he struck with Democratic and Republican centrists in the Senate last month. The deal is in jeopardy after Republicans balked at a key revenue source included in the initial deal: stepped-up enforcement efforts at the I.R.S. to catch tax cheats.

White House officials and Senate negotiators — including 11 Democrats and 11 Republicans — are working to salvage it by substituting a new revenue source.

“We are still negotiating,” the lead Republican negotiator, Senator Rob Portman of Ohio, said on CNN’s “State of the Union” on Sunday. “In fact, last night, I was negotiating some of the final details with the White House. And, later today, we will be having additional negotiations with the Republicans and Democrats who have come together to put this bill into a track that’s very unusual for Washington.”

Mr. Biden will also use his speech to push for a second facet of his agenda, which Democrats are planning to pursue without Republican support: a $3.5 trillion plan, achieved through the budget reconciliation process, that bypasses a Senate filibuster.

That plan contains the bulk of Mr. Biden’s $4 trillion economic agenda that is not included in the bipartisan bill, like expanding educational access, building more affordable and energy-efficient housing, incentivizing low-carbon energy through tax credits and a wide range of other social programs meant to invest in workers.

Mr. Portman and other Republicans have ramped up criticism of that spending in recent days, claiming it will stoke more inflation for an economy that is already experiencing rapid price growth. Mr. Biden is expected to push back on those critiques in his speech. His economic team has said repeatedly that inflation increases today are largely a product of the Covid-19 pandemic and will fade in the months or years to come.

Administration officials also say the Democrats’ $3.5 trillion plan will dampen price pressures by freeing up Americans to work more — through subsidized child care, national paid leave and other measures — and improving the efficiency of the economy.