The overwhelming nature of grief has been the unofficial theme this week for a White House confronted with a disaster in the nation’s second largest state amid a pandemic. 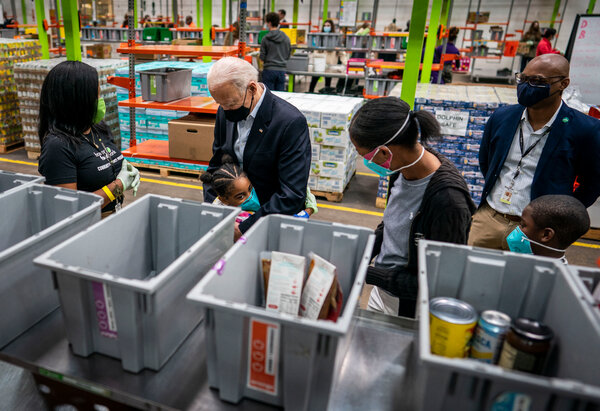 WASHINGTON — At an emergency response center in Houston on Friday, President Biden praised officials who had slept in stairwells as they worked around the clock to help people with no power or drinkable water because of the devastating storms, low temperatures and breakdown of basic utilities that had paralyzed Texas.

At a food bank, Mr. Biden hugged a little girl who was volunteering, then talked to a woman about the death of his eldest son, once again plugging into the pain of others by accessing his own.

Later, when visiting a stadium converted into a mass-vaccination site that will administer shots into the arms of some 6,000 Texans a day, Mr. Biden offered reassurance that the federal government would be working to provide clean water, blankets, food, fuel and shelter to people struggling to rebuild their lives in the state.

“We will be true partners to help you recover,” Mr. Biden said. “We’re in for the long haul.”

Infrastructure and coronavirus relief may be on the official agenda in Washington, but the overwhelming nature of grief has been the unofficial theme this week for a White House confronted with a pandemic that has resulted in a catastrophic loss of life and now a disaster in the nation’s second largest state.

Not every president comes naturally to the role of comforting the afflicted, but Mr. Biden, who lost his first wife and has buried two children, is the rare politician who seems to draw strength from the experience.

“He provided a lot of hope to people who know that their suffering is not going unnoticed,” Sylvester Turner, the Democratic mayor of Houston, said in an interview. “He is respondent in a very quick fashion, and his presence here means a great deal to a lot of people.”