In his first prime-time address from the White House, the president said that he would order states to make all adults eligible for the vaccine by May 1 and that a return to normalcy was possible by July 4. 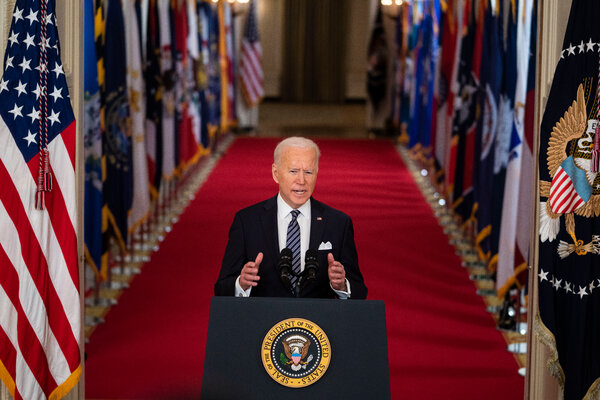 WASHINGTON — Seeking to comfort Americans bound together by a year of suffering but also by “hope and the possibilities,” President Biden made a case to the nation Thursday night that it could soon put the worst of the pandemic behind it and promised that all adults would be eligible for the vaccine by May 1.

During a 24-minute speech from the East Room, Mr. Biden laced his somber script with references to Hemingway and personal ruminations on loss as he reflected on a “collective suffering, a collective sacrifice, a year filled with the loss of life, and the loss of living, for all of us.”

Speaking on the anniversary of the World Health Organization declaring a pandemic and the moment at which the virus began tightening its grip, the president offered a turning point of sorts after one of the darkest years in recent history, one that would lead to more than half a million deaths in the country, the loss of millions of jobs and disruptions to nearly every aspect of society and politics.

With the stimulus bill about to give the economy a kick, the pace of vaccinations increasing and death rates down, Mr. Biden said Americans were on track to return to a semblance of normal life by July 4 as long as they took the chance to get vaccinated and did not prematurely abandon mask wearing, social distancing and other measures to contain the virus.

In putting a date, however cautiously, on the calendar, Mr. Biden also offered something intangible: hope for a summer with barbecues, family gatherings and hugs for grandparents.

“July 4th with your loved ones is the goal,” he said.

Mr. Biden did not mention his predecessor, Donald J. Trump, but his address drew sharp contrasts to him, repeatedly citing the need to tell the American people the truth, appealing for unity, celebrating the accomplishments of science and calling for continued vigilance against a virus that he said could still come roaring back.