WASHINGTON — President Biden wants to work with Congress to repeal and replace a war authorization law passed shortly after the Sept. 11, 2001, attacks, White House officials said on Friday. That law has been stretched across four administrations to permit open-ended combat against Islamist militant groups scattered across the world.

The Biden administration is committed to working with Congress “to ensure that the authorizations for the use of military force currently on the books are replaced with a narrow and specific framework that will ensure we can protect Americans from terrorist threats while ending the forever wars,” Mr. Biden’s press secretary, Jen Psaki, said in a statement.

But her statement stopped short of endorsing any particular proposal for how to overhaul the 2001 law, which is known as the Authorization for Use of Military Force, or A.U.M.F.

Congress has for years struggled to reach any consensus about that question.

The wording and intent of the 2001 law have grown increasingly detached from how the American government is using it. The law authorized war against the perpetrators of the Sept. 11 attacks and those who harbored them — essentially, the original Al Qaeda and its Taliban hosts.

But as the campaign against terrorism evolved, the executive branch under administrations of both parties stretched its interpretation to justify combat against other terrorist groups far from Afghanistan — like a Qaeda affiliate in Yemen, the Islamic State in Iraq and Syria, and the Shabab in Somalia.

By claiming it already has congressional authority to battle such foes, the executive branch has avoided problems with the War Powers Resolution — a Vietnam-era law that requires terminating hostilities after 60 days unless authorized by Congress — while a gridlocked and polarized Congress has avoided having to cast tough votes.

But many critics, including many lawmakers of both parties, say they believe that the authorization has been extended well beyond its intent, usurping the role of Congress under the Constitution to decide when the country will go to war. Yet lawmakers have been unable to agree on how to update it.

One faction refuses to write a new blank check extending the “forever war.” It is attracted to ideas for imposing tighter restraints, like having the law automatically expire after a period, restricting levels of ground forces and restricting the executive branch’s ability to deem new foes as associated forces of Al Qaeda and treat them as part of the existing war.

Another faction, however, warning that Islamist terrorism remains a major threat to national security, has balked at subtracting from the government’s current authority to use military force in fighting Qaeda-linked groups. The impasse has resulted in sticking with the 2001 law.

Still, there are signs that the politics may be shifting. While some veteran Republicans who favored overhauling the A.U.M.F. have retired — like former Senators Bob Corker of Tennessee and Jeff Flake of Arizona — there are also many recently elected lawmakers, on the far left and right in particular, who share the view that Congress needs to regain its role in war decisions.

Amid the flux, Senator Tim Kaine, Democrat of Virginia, has been a steady force in pushing for overhauling the war authorizations. In Ms. Psaki’s statement, which was earlier reported by Politico, the White House also singled Mr. Kaine out on Friday as a lawmaker it wanted to work with in trying to sort through the tangle.

A spokeswoman for Mr. Kaine, citing Mr. Biden’s deep experience in both the legislative and executive branches, said the senator hoped the new president could help restore balance of war powers. “We need to protect the country but not be in perpetual war,” she said. “And he is already in bipartisan discussion with his colleagues and the administration about how to do that.”

This week, Mr. Kaine and several colleagues of both parties introduced a bill that would repeal two other aging war laws that are still on the books: a 1991 one that authorized the Persian Gulf war against Iraq, and a 2002 one that authorized the second Iraq war. In previous sessions, he has also sponsored legislation that would tackle the harder question of how to repeal and replace the 2001 A.U.M.F., but so far he has not reintroduced it.

While the 1991 gulf war law is obsolete, the 2002 Iraq war law retains relevance. In 2014, after the Islamic State swept across parts of Iraq and Syria and the Obama administration began bombing it, President Barack Obama asked Congress for a law to authorize the war, while simultaneously insisting he did not need new legislative approval.

The Obama administration’s rationale cited both the 2001 and 2002 war laws as providing a pre-existing legal basis to attack ISIS, which had evolved from a Qaeda affiliate that participated in the Iraq war insurgency. The claim was disputed, but an attempt to get a court to scrutinize its legitimacy failed. 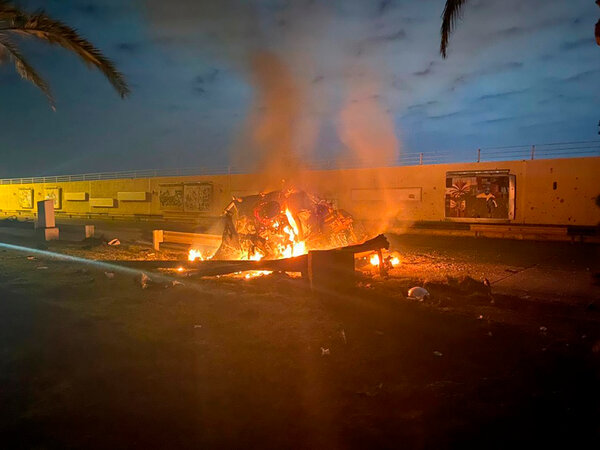 Efforts in Congress to specifically authorize the ISIS war also failed. At that time, some Republicans criticized Mr. Obama’s strategy as insufficiently hawkish, but resisted granting him the authority he asked for. Some Democrats, still stinging from the 2002 vote to authorize the Iraq war, preferred granting only limited authority for an air war. Ultimately, Congress did nothing, effectively acquiescing to the theory that the war already had a legal basis.

Under President Donald J. Trump, new alarms arose over signs his team might be playing with the idea that it could start a war with Iran by citing the old laws rather than going to Congress for new and specific authorization.

Then, in January 2020, Mr. Trump ordered an airstrike in Iraq that killed Maj. Gen. Qassim Suleimani, Iran’s top military and intelligence leader, pushing the United States and Iran to the brink of war. Portraying the mission as self-defense of troops in Iraq, the Trump administration claimed the strike relied in part on the 2002 Iraq war law, citing the Obama team’s arguments that it provided congressional authority to deploy troops to Iraq for the ISIS conflict.

Many lawmakers disagreed that the 2002 A.U.M.F. covered killing General Suleimani. Congress passed a measure sponsored by Mr. Kaine under the War Powers Resolution stating that the strike was not covered by either the 2001 or 2002 war laws and barring further escalation of hostilities with Iran without any new and specific authorization. (Mr. Trump vetoed it.)

Last month, a similar issue arose when the Biden administration bombed Iranian-backed militias in Syria it said were responsible for recent attacks on American troops across the border in Iraq. However, Mr. Biden did not claim that he had authorization from Congress to carry out strikes like that one. In a letter to Congress, he instead cited only his constitutional authority as the commander in chief as providing a domestic legal basis for the strike.