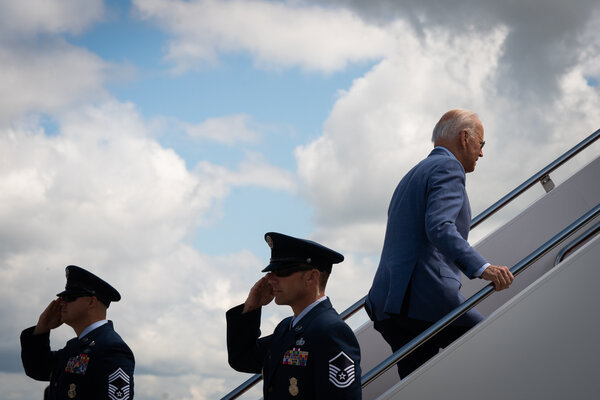 President Biden will make his latest in a string of visits to the Midwest on Wednesday with a trip to Crystal Lake, Ill., a suburb of Chicago, in an effort to rally support for his $1.8 trillion American Families Plan.

It comes on the heels of trips to Traverse City, Mich., and La Crosse, Wis., last week in which he promoted other top items on his agenda, including his administration’s ongoing vaccination campaign and the infrastructure plan the White House negotiated with a bipartisan group of senators last month.

In his remarks on Wednesday, Mr. Biden is expected to bring together Democratic leaders in McHenry County, which he narrowly lost, and pitch a spending package aimed at reducing poverty by expanding access to child care, offering free community college and increasing subsidies under the Affordable Care Act, among other measures. The proposal would be financed by new taxes on the wealthy.

Like the infrastructure plan, the fate of the American Families Plan hinges on the administration’s ability to rally support on Capitol Hill. While White House officials are working to pass the infrastructure plan with bipartisan support, Mr. Biden has said he would be willing to push through his social spending plan with only Democratic votes by using the fast-track budget reconciliation process.

Yet some moderate Democrats, like Senator Joe Manchin III of West Virginia, have expressed reservations with the proposal. And progressives including Senator Bernie Sanders, independent of Vermont, argue that it does not go far enough and are pushing to expand it to as much as $6 trillion.

White House officials said Mr. Biden would speak on Wednesday at McHenry County College and focus on “the benefits the American Families Plan will deliver for working families across the country.”

Gov. J.B. Pritzker and the State Senate president, Don Harmon, are expected to join Mr. Biden along with Representatives Lauren Underwood and Sean Casten of Illinois.

The president will be speaking in Crystal Lake as violent crime surges in nearby Chicago, where more than 100 people were shot, 19 fatally, over the July 4 weekend, according to local reports.

While Mr. Biden is expected to meet with a host of Democratic officials, White House officials said the trip was merely part of the administration’s effort to inform the public about the president’s goals.

“I would see this as less of a political trip, more of as an opportunity to speak to all Americans about why his Build Back Better agenda, and why his effort to extend the child tax credit, to make community college more affordable, to make universal pre-K a reality, is something that many people of all political stripes should be able to support,” Jen Psaki, the White House press secretary, told reporters on Tuesday.