In a move which risks opening a rift between Joe Biden’s administration and the UK political establishment, the US President’s press secretary has heaped praise on the Duke and Duchess of Sussex. Jen Psaki said the President believed in the power of individuals speaking out when asked for his view on the bombshell sit-down chat that has thrown the Royal Family into crisis.

She said: “For anyone to come forward and speak about their own struggles with mental health and tell their own personal story, that takes courage and that’s certainly something the president believes.”

In a two hour broadcast first aired in the US last night, the Duke and Duchess of Sussex spoke out on life inside the Royal Family for the first time since quitting the Firm.

During the sit-down, the couple made a series of jaw-dropping accusations that could damage the standing of the monarchy on the world stage.

The Duchess of Sussex claimed racist remarks were made about her son Archie, saying an unnamed member of the Royal Family raised concerns about how dark his skin might be. 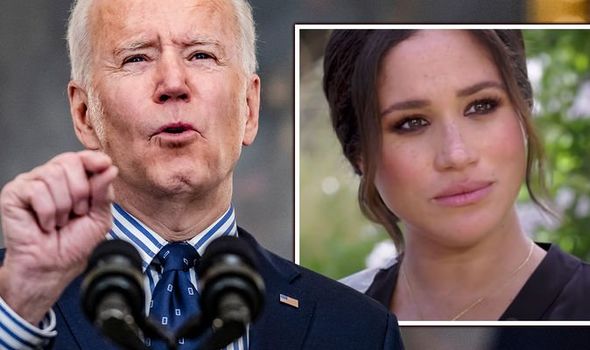 She also accused the institution of failing to support her as her mental health deteriorated.

Meghan said she had been pushed to the brink of suicide after her struggle to adapt to life inside the Firm.

Wiping away a tear as she spoke to the US chat show host, the Duchess said: “I just didn’t want to be alive any more.

“And that was a very clear and real and frightening constant thought.

“And I remember how he Harry just cradled me.”