WASHINGTON — President Biden’s agenda is facing its most consequential test as Democrats prepare to maneuver his $1.9 trillion stimulus package through the evenly divided Senate, an effort that could strain the fragile alliance between progressives and centrists and the limits of his power in Congress.

An early-morning House vote to pass the sweeping pandemic aid measure only underscored the depth of partisan division over the proposal, which was opposed by every Republican. But the road ahead in the Senate is far bumpier, with a thicket of arcane rules and a one-vote margin of control threatening to imperil crucial aspects of the plan as Democrats rush to deliver it to Mr. Biden’s desk within two weeks.

Already, Mr. Biden’s proposal to raise the federal minimum wage to $15 an hour by 2025 as part of the plan has run aground because of budgetary rules for the measure, which Democrats are advancing under a complex process that allows it to pass by simple majority vote, bypassing Republican opposition.

In the week ahead, they will also face challenges in steering other aspects of the bill through procedural obstacles and around political pitfalls, including debates over how much to spend on closing state and local budget shortfalls and how to distribute expanded tax benefits aimed at helping impoverished families.

The challenge for Mr. Biden will be holding both sides together in the face of unified Republican opposition to secure a bill that White House officials believe will cushion vulnerable Americans through the end of the pandemic and turbo-boost the economy as it reopens in full.

“We have no time to waste,” Mr. Biden said on Saturday at the White House. “If we act now decisively, quickly and boldly, we can finally get ahead of this virus.”

Progressives are pushing hard for party leaders to change Senate rules to keep the wage increase in the bill, arguing that Democrats must not scale back their ambitions for Mr. Biden’s first major legislative package.

The debate over the minimum wage, Representative Alexandria Ocasio-Cortez, Democrat of New York, told reporters, “sets the stage for how effective we’ll be for the rest of the term.”

But moderates including Senators Joe Manchin III of West Virginia and Kyrsten Sinema of Arizona want to keep Senate rules — which effectively require 60 votes to advance most major legislation — intact, and are opposed to including such a sharp increase in the minimum wage in the package.

Party leaders and White House officials remain confident that Mr. Biden has the votes, no matter the fate of the wage increase. All but two House Democrats voted for the legislation, called the American Rescue Plan, which has broad bipartisan support among voters. But congressional Republicans have united against it, after being effectively frozen out of drafting the bill.

“The House’s partisan vote reflects a deliberately partisan process and a missed opportunity to meet Americans’ needs,” Senator Mitch McConnell of Kentucky, the minority leader, said in a statement.

The measure now moves to the Senate, which is split 50-50, with Vice President Kamala Harris controlling the tiebreaking vote. Mr. Biden’s early attempts to find common ground with moderate Republican senators on the package yielded little other than general expressions of bipartisan aspiration, with the Republicans proposing a plan amounting to less than one-third of what the president is asking to address the toll of a crisis that has left 10 million Americans out of work.

With unemployment benefits set to begin lapsing on March 14 for the workers who have been thrown off the job longest in the crisis, Democrats have only two weeks to finish the package in the Senate and resend it to the House and Mr. Biden’s desk. Because party leaders decided to use a fast-track budget process known as reconciliation to swiftly move the legislation and circumvent Republican opposition in the Senate, the bill will need to comply with a series of strict budgetary rules along the way.

While the House included the federal minimum wage increase in the version it passed on Saturday, a key Senate official has warned that it violates the reconciliation rules, enabling Republicans to challenge it and jettison it from the package. It is likely that more changes to the bill will be needed to ensure it complies with Senate rules and can draw the support of every Democrat. 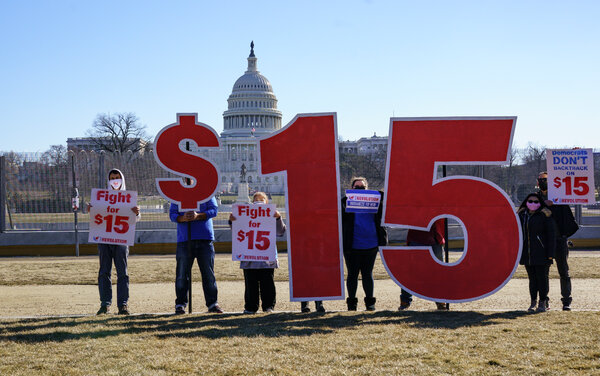 Progressives in the House warned on Friday that they might withhold their votes for the stimulus package if the wage increase were removed. The debate has fueled an already simmering dispute over whether Democrats should try to abolish Senate rules, chiefly those governing filibusters that mandate a 60-vote threshold to move forward, that the minority party has long used to block major legislative initiatives.

“This is not a matter of whether you have the votes — this is a matter of whether you do what you said,” said the Rev. William J. Barber II, a co-chairman of the Poor People’s Campaign, a grass-roots organization that plans to continue lobbying Mr. Manchin, Ms. Sinema and other lawmakers to overrule the parliamentarian and abolish the filibuster. “Don’t hide behind a rule. Don’t hide behind a backdoor meeting.”

Mr. Biden has acknowledged publicly that the wage increase could fall out of the bill, and indicated he would sign the package regardless. His chief of staff, Ron Klain, ruled out the possibility that Ms. Harris would override the guidance of Elizabeth MacDonough, the Senate parliamentarian who has said the proposal is out of order under reconciliation. Top Democrats have signaled that they have no plans to oust Ms. MacDonough, who became the first woman to hold the post in 2012, despite liberal calls to do so.

Still, White House economic officials argue that even the increase of the wage to $9.50 this year, as the bill calls for, would bolster incomes and spending for the lowest-paid workers in the economy, helping fuel economic growth.

Party leaders say they will find a middle ground that will allow the stimulus package to move forward.

“We have a consensus in our caucus that we are here to get the job done for the American people,” Speaker Nancy Pelosi of California said on Friday at a news conference. Pressed on whether Democrats would ultimately be able to pass the legislation without the inclusion of the minimum wage provision, she said, “absolutely.”

Democrats are bracing for additional revisions to the legislation as a result of Ms. MacDonough’s guidance, including changing how quickly people can reap the benefits of an expanded tax credit meant to help low-income families with children. With some moderate Democrats in favor of targeting elements of the relief plan, they may also be forced to scale back or otherwise alter how the $350 billion allotted for state, local and tribal governments is distributed.

Republicans face perils of their own in opposing the measure en masse. The bill enjoys strong and bipartisan support in national polls, with seven in 10 Americans approving. Most polls show significant backing among Republican voters for the effort. Some show majority Republican support.

Critical provisions of the bill that Republican lawmakers have derided as wasteful — including direct payments of $1,400 per adult and child to individuals earning up to $75,000 a year and couples earning up to $150,000 — are backed by as many as four in five Americans.

Business groups and budget hawks have staked out a middle ground, urging Democrats to pare back or amend the package in the Senate. The U.S. Chamber of Commerce has called for a bipartisan compromise on raising the wage, to an amount less than $15 an hour. The U.S. Travel Association called on lawmakers Saturday to take additional steps in the bill to support an industry that “lost half a trillion dollars and millions of jobs last year” — with no immediate rebound in sight.

The Committee for a Responsible Federal Budget, which has raised concerns over the size of the package and the targeting of its spending, urged lawmakers to reduce the bill’s $350 billion in aid to state and local governments, and to scale back the number of Americans who receive direct payments in order to avoid sending money to people who have not lost hours or income in the crisis.

But without the majority support needed to eliminate the Senate filibuster, some Democrats are looking toward negotiations with Republicans as the only way to push a minimum wage increase into law.

“Not the answer we hoped for, but the one as a lawyer I expected,” Senator Sheldon Whitehouse, Democrat of Rhode Island, wrote on Twitter of the parliamentarian’s rejection of the minimum wage provision, which he called “within bounds.”

“Now we need to get it done the hard, old-fashioned way,” he added.