BBC Newsnight host Faisal Islam called out the EU for “trying to blame” its own vaccine chaos on the UK. During a heated row with Spanish Foreign Minister Arancha Gonzalez-Laya, Mr Islam labelled the ongoing row over Covid vaccine supplies “a total calamity caused by the European Commission”. This comes after the EU was forced to U-turn on its decision to temporarily override part of the Brexit deal, which could have blocked shipments entering the UK.

The move to trigger Article 16 would have seen checks at the border of Ireland and Northern Ireland, potentially stopping coronavirus jab supplies from reaching the UK.

This would override parts of the Brexit deal, which guarantees an open border between the EU and Northern Ireland, with no controls on exported products.

Newsnight host Faisal Islam said: “This is a mess isn’t it?

“It is a total calamity caused by the European Commission’s slowness over getting the vaccines and you are trying to blame it on the UK and UK business.” 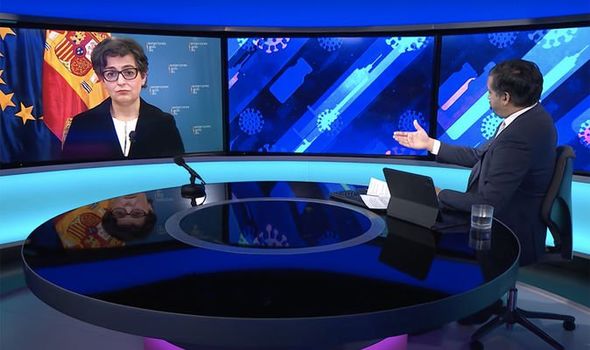 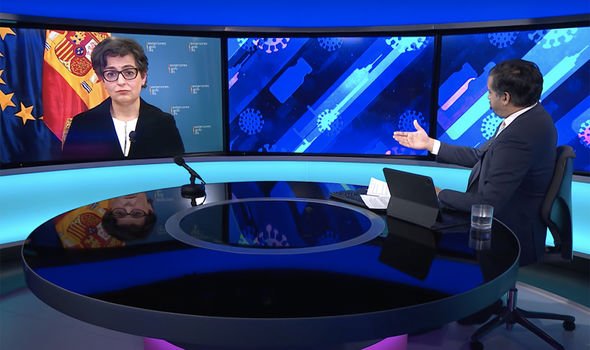 Ms Gonzalez-Laya struggled to respond as she insisted that the EU’s behaviour was targeting pharmaceutical companies, not countries.

She denied that the spat was a “hostile act against third countries or territories”.

The Spanish minister added: “What is important is that pharmaceutical companies deliver on the engagements they’ve taken vis-a-vis with European governments.”

The BBC host fired back: “But it is literally an export ban that would affect the UK specifically. 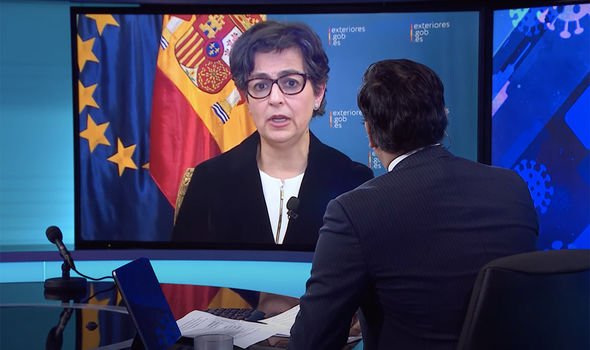 “It may be a commercial spat you have with AstraZenca but why then embargo the UK as a whole? Why dangle that threat?”

“This is the mechanism of transparency the EU needs to ensure a particular pharmaceutical company honours its commitment.” 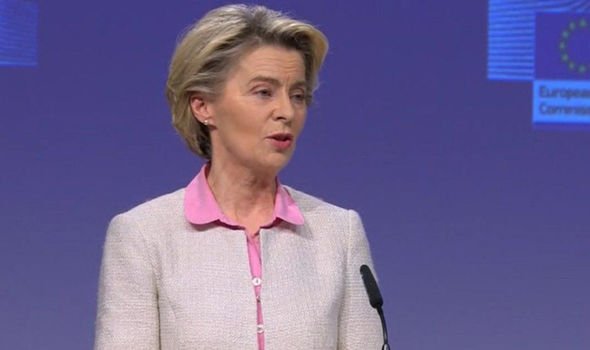 Mr Islam pressed the foreign minister on the Article 16 decision, saying: “Haven’t your colleagues in Brussels just got this wrong?”

The Spanish politician admitted that the use of Article 16 was an “accident” and “a mishap” that had been “repaired”.

The BBC’s European editor Katya Adler later added: “Although the EU has U-turned on those plans, critics say the damage was already done.

“Brussels previously lectured the UK government about respecting the Irish Protocol – which was painfully and carefully drafted during Brexit negotiations.

“Now the EU seemed quick to undermine the agreement. Member state Ireland felt stung that it hadn’t been consulted.

“This all adds to the impression of chaos surrounding the EU’s vaccine rollout.

“Brussels was already under fire from a growing number of EU countries for having been slow to sign vaccine contracts with pharmaceutical companies.

“This ‘mishap’ over the Irish Protocol as Spain’s Foreign Minister called it, hasn’t exactly helped the commission’s reputation.”