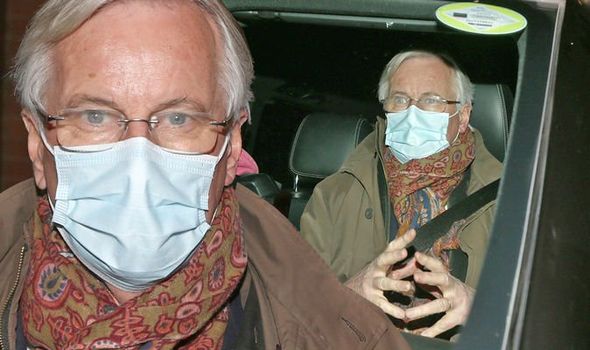 The EU’s chief Brexit negotiator has been in London over the weekend for crucial talks ahead of the end of the transition period on December 31. But fishing rights and state aid remain sticking points within negotiations.

While a no deal outcome is looking more and more likely, Micheal Gove, the cabinet minister responsible for the divorce deal, said an agreement was close.

But he warned the EU would have to live up to its responsibilities.

When asked if a no deal scenario was closer than anyone will admit, he told ITV today: “It’s certainly the case that there is a chance that we may not get a negotiated outcome.

“That’s why it’s important business prepares for all eventualities, but I very much want a deal and I believe that we can secure one.”

Mr Gove repeated an earlier predication of a 66 precent probability of a deal with the EU.

This comes after a French official said Britain needs to clarify its positions and “really negotiate” and warned the EU would not accept a “substandard deal”.

The UK formally left the European Union in January this year and negotiations have been ongoing, with neither side budging on fishing rights or state aid.

He said: “The preservation of our fishermen in British waters is an essential condition.

“France will not allow an agreement that does not respect our interests.”

Last week, Mr Barnier offered to give between 15 and 18 percent of fish caught in UK waters by European boats back to Britain under a deal.

The EU’s offer would be worth just an estimated £105million (€117million).

But the ultimatum by Mr Barnier was attacked by Micheal Gove who claimed it was unacceptable for Britain.

Mr Gove told Sky News there are three things which remain as sticking points in negations.

He said: “The EU still wants to take the lion’s share of the fish in our waters which is just not fair given we are leaving the EU.

“The second thing is that the EU still wants us to be tied to their way of doing things.

“The third thing is what happens if there is a dispute.

“The EU is at the moment reserving the right if there is a dispute, not quite to rip everything up, but really to impose some quite penal and tough restrictions on us.

“We do not think that is fair.”