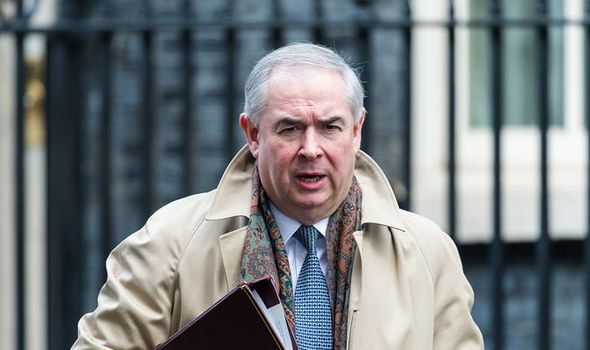 The ex-attorney general is thought to have attended a virtual meeting to advise the British Virgin Islands over a corruption probe by the Foreign Office. Labour has referred him to the Commons standards commissioner as rules stipulate MPs cannot use public resources, such as parliamentary offices, for “personal or financial benefit”.

Sir Geoffrey said it was up to voters to decide whether he remains an MP.

The QC ‑ who offered legal advice to the islands that could earn him more than £1million on top of his £81,900 MP’s salary ‑ said he would co-operate with any investigation.

Footage from September of Sir Geoffrey participating in a virtual hearing, from what appears to be his Commons office, is online.

At one point he gets up, only to return around half an hour later ‑ and his absence occurs at about the time MPs voted on the Government’s health and social care funding reforms.

He is heard excusing himself, saying “I’m afraid I have compelling other commitments”, and, “I’m afraid the bell went off”.

This appears to be a reference to the division bell, which calls MPs to the Commons to vote.

A statement posted on Sir Geoffrey’s website says: “He does not believe he breached the rules but will of course accept the judgement of the Parliamentary Commissioner or of the Committee [on Public Standards] on the matter…

“Sir Geoffrey’s view is that it is up to the electors of Torridge and West Devon whether or not they vote for someone who is a senior and distinguished professional in his field and who still practises that profession.”

He is also under fire for voting from the British Virgin Islands while he worked there when MPs could vote by proxy, or remotely, due to the pandemic.

He claims he consulted the Conservative chief whip about doing so and “was advised that it was appropriate”.

But Health Secretary Sajid Javid told BBC Breakfast: “If you have an external interest, I can’t see why you would be using anything that is funded by the taxpayer, I think that would include your office space.”

Deputy Labour leader Angela Rayner said: “The Prime Minister needs to explain why an MP in his parliamentary party treats Parliament like a co-working space, allowing him to get on with all of his other jobs instead of representing his constituents.”