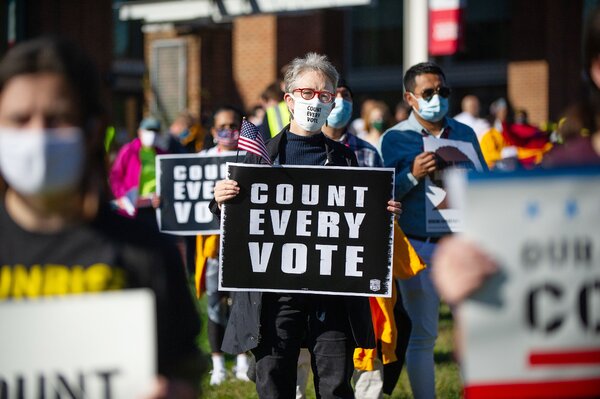 President Biden will travel to Philadelphia on Tuesday to deliver a speech on voting rights as Republicans in state legislatures across the country are seeking pass measures restricting access to vote and as a Democratic effort to overhaul the system has faltered in Congress.

The trip to the birthplace of American democracy is meant to provide a powerful backdrop for Mr. Biden as he tries to revive an embattled centerpiece of his domestic agenda.

Mr. Biden is expected to outline all of the ways his administration is working to further voting access. He is expected to highlight the vice president’s efforts to support voter registration and education. He will likely reinforce the idea that the current crop of Republican statehouse efforts meant to restrict voting access were inspired by a lie that voter fraud upset the 2020 election.

“He will redouble his commitment to using every tool at his disposal to continue to fight to protect the fundamental right of Americans to vote,” Jen Psaki, the White House press secretary, told reporters on Monday.

But absent from the outline detailed by Ms. Psaki is any plan to address growing demand among activists that he call for Democrats to unite behind a change in filibuster rules. Rolling back the filibuster would allow two pieces of ambitious voting rights legislation to pass the Senate with a simple majority vote.

In an interview on Monday, Rev. Al Sharpton said that he and several other civil rights leaders pushed Mr. Biden to add such an entreaty to Democrats in his speech.

“We encouraged him to make a real appeal to all of the Democrats to get in line,” Mr. Sharpton said, recalling a meeting he and several other civil rights leaders had at the White House with Mr. Biden late last week. “I think he heard us, but I don’t know.”

Mr. Biden’s speech in Philadelphia comes as Democrats see a worrying increase in efforts to restrict the vote, along with court rulings that would make it harder to fight back against those efforts. A Supreme Court ruling this month weakened the one enforcement clause of the Voting Rights Act that remained after the court invalidated its major provision in 2013. Mr. Biden said a year ago that strengthening the act would be one of his first priorities upon taking office.

While they wait for federal action that may not come, Democrats in states that are passing restrictive laws are resorting to dramatic action to draw national attention to what they feel is an assault on American democracy. On Monday, a bevy of Texas Democrats flew on chartered planes to Washington to stop Republicans in their state from attaining a quorum, which would have furthered the passage of a restrictive voting law.

On Monday during a visit to Detroit, Vice President Kamala Harris praised the Texans for walking out.

“I applaud them standing for the rights of all Americans and all Texans to express their voice through their vote, unencumbered,” Ms. Harris said during a listening round table on the issue. “I do believe that fighting for the right to vote is as American as apple pie. It is so fundamental to fighting for the principles of our democracy.”