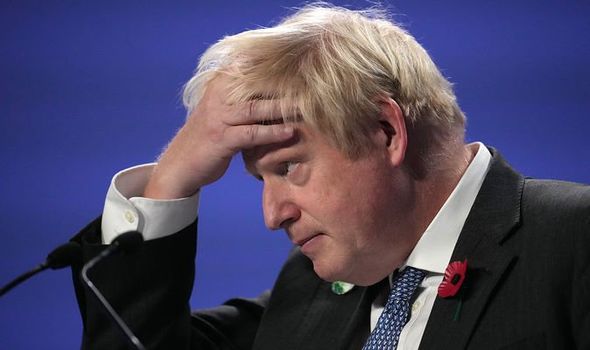 The Prime Minister has emphatically refused to apologise despite the growing pressure from Tory MPs. In the face of fury from the opposition and deep misgivings from many on his own side, Mr Johnson stayed away yesterday from an emergency Commons debate over parliamentary standards.

And former chief whip Mark Harper was among those urging the PM to say sorry.

Mr Harper said on Twitter: “Politics is a team effort. If the team captain gets their former Tory grandee Owen Paterson’s conduct was handled expressed their dismay yesterday.

And former chief whip Mark Harper was among those urging the PM to say sorry.

Mr Harper said on Twitter: “Politics is a team effort. If the team captain gets their side ‑ from backbenchers to senior Ministers ‑ into difficulty when they get something wrong, they should apologise to the House.

“That’s leadership. We need to see more of it.”

Angry opposition MPs accused Mr Johnson of acting like a “tinpot dictator” and likened his behaviour to Russian and Chinese rulers during last night’s debate.

Mr Johnson yesterday declined to face the Commons for the debate, with his aides insisting he had a prearranged commitment to visit Hexham General Hospital, in Northumberland.

Pressed by reporters to apologise for the sleaze row during his visit, he said: “What we’ve got to make sure is that we take all this very seriously and that we get it right.

“And there’s a debate today. Unfortunately, I can’t be there because I had a long-standing engagement up here.

“But the opposition obviously want to focus on a particular case, a particular MP who suffered a serious personal tragedy, and who’s now resigned.

“Frankly, I don’t think there’s much more to be said about that particular case, I really don’t.

“But what we do need to do is look also at the process, and that is what we were trying to do last week. What I hope is there will be cross-party agreement on a way forward, including an appeals process for very difficult and very sad cases such as the one we’ve seen.”

Mr Johnson rejected accusations that the Government’s botched attempt to review standards rules was seeking to get Mr Paterson “off the hook”.

He said: “No, absolutely not. There’s been long-standing concerns among MPs across the House of Commons about the process.

“I think that if I understand things correctly, the Speaker is saying he wants to have a cross-party approach to look at the issue of appeals, in particularly difficult cases, and I totally support that.”

Mr Johnson also rejected claims from former Tory premier Sir John Major that his handling of the case was “shameful and wrong and trashing the reputation of Parliament”.

The PM said: “No, of course not, and I’ve said what I’ve said about the particular case of one MP who as I said suffered ‑ over the course of a long investigation ‑ a personal tragedy, has now resigned his seat, and I really don’t have any more to add to that.

“If there is anything positive to come out of the whole thing it is that as far as I can make out the Speaker is determined to try to move us all forward with a system whereby we can have a cross-party approach, which is what we were trying to achieve last week, get everybody together and look at ways in which we can reform and improve the process.”

Ministers then attempted to overhaul the rules, blocking the suspension in the process, but then retreated in the face of a furious outcry. Mr Paterson quit as an MP last week.

He had accused the lobbying inquiry of being a factor in his wife Rose’s suicide last year.

Opening the Commons debate on standards, Mr Barclay acknowledged that the Government had made a mistake.

He told MPs: “I’d like, first and foremost, to express my regret and that of my ministerial colleagues over the mistake made last week.

“We recognise there are concerns across the House over the standards system and also the process by which possible breaches of the code of conduct are investigated.”

In heated exchanges, Sir Keir Starmer accused the Government of “corruption” and claimed the absent PM was “running scared”.

The Labour leader said: “Leadership is about taking responsibility, and if there is an apology to be made, that apology should come from the top, just as the ­direction came from the top last week to engage in this business in the first place.

“He led his party through the sewers and the stench lingers. This week he had the chance to clean up, to apologise to the country and finally accept that the rules apply to him and his friends.

“But instead of stepping up, he has hidden away. Instead of clearing up his mess he has left his side knee-deep in it. Instead of leading from the front, he has cowered away. He is not a serious leader and the joke isn’t funny any more.”

Labour’s Tanmanjeet Singh Dhesi went further, branding the PM a “tin-pot dictator who himself is now mired in sleaze”.

Lib Dem chief whip Wendy Chamberlain said: “This is almost the kind of behaviour we would expect to see in the Duma in Moscow, National People’s Congress in Beijing, not in the House of Commons.”

Commons Speaker Sir Lindsay Hoyle said: “I granted this debate because I thought it was essential to sort out the mess we’re in.

“We can start to do that today but it requires two things ‑ to tone down the party political sniping and focus on making sure the system is as effective as it can be.”