The spy agency had plans to de-emphasize counterterrorism operations to focus on rising global powers. History got in the way. 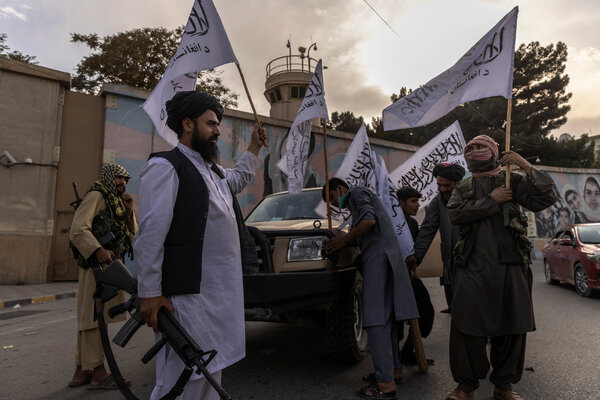 WASHINGTON — As the Afghanistan war wound down, the C.IA. had expected to gradually shift its primary focus away from counterterrorism — a mission that transformed the agency over two decades into a paramilitary organization focused on manhunts and killing — toward traditional spycraft against powers like China and Russia.

But a pair of deadly explosions on Thursday were the latest in a series of rapidly unfolding events since the collapse of the Afghan government and the Taliban takeover of the country that have upended that plan. Like a black hole with its own gravitational pull, Afghanistan could draw the C.I.A. back into a complex counterterrorism mission for years to come.

American officials are reworking plans to counter threats that could emerge from Afghanistan’s chaos, according to current and former officials: negotiating for new bases in Central Asian countries; determining how clandestine officers can run sources in the country without the military and diplomatic outposts that provided cover to spies for two decades; and figuring out from where the C.I.A. could launch drone strikes and other Afghanistan operations.

Thursday’s attacks at the Kabul airport, which killed more than a dozen U.S. service members and scores of Afghan civilians, were evidence that terrorist groups are already working to sow further chaos in the country and could hope to use it as a base for attacks outside Afghanistan.

Hours later, President Biden pledged to hunt down those responsible for the bombings. “We will respond with force and precision at our time, at the place we choose and at the moment of our choosing,” he said.

The United States and its allies want to keep Afghanistan from devolving into a terrorist haven akin to Syria a decade ago and Afghanistan before Sept. 11, when the chaos of war lured a hodgepodge of terrorists and new extremist groups were born. The most urgent threat in Afghanistan is the local Islamic State group, American officials said. Leaders of Al Qaeda may also try to return to the country. And while the Taliban may not want either group in Afghanistan, they may be incapable of keeping them out, current and former American officials said.

“It’s going to get a lot harder,” said Don Hepburn, a former senior C.I.A. officer who served in Afghanistan. “The agency is being drawn in many, many directions.”

Mr. Biden’s determination to end the military’s involvement in Afghanistan means that, starting next month, any American presence in the country would most likely be part of a clandestine operation that is not publicly acknowledged.

The C.I.A.’s new mission will be narrower, a senior intelligence official said. It no will longer have to help protect thousands of troops and diplomats and will focus instead on hunting terrorist groups that can attack beyond Afghanistan’s borders. But the rapid American exit devastated the agency’s networks, and spies will most likely have to rebuild them and manage sources from abroad, according to current and former officials.

The United States will also have to deal with troublesome partners like Pakistan, whose unmatched ability to play both sides of a fight frustrated generations of American leaders.