Joe Biden’s campaign rejected assertions made in a published report that were based on unverified material from Trump allies. Facebook and Twitter found the story dubious enough to limit access to it on their platform. 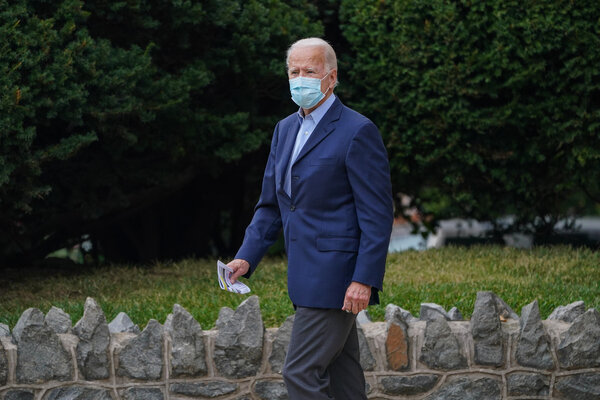 The Biden campaign on Wednesday rejected a New York Post report about Joseph R. Biden Jr. and his son Hunter that the nation’s leading social media companies deemed so dubious that they limited access to the article on their platforms.

The report, appearing just three weeks before the election, was based on material provided by Republican allies of President Trump who have tried for months to tarnish Mr. Biden over his son. It claimed that the elder Mr. Biden had met with an adviser to a Ukrainian energy company on whose board Hunter Biden served.

A spokesman for the Biden campaign, Andrew Bates, said that Mr. Biden’s official schedules showed no meeting between Mr. Biden and the adviser, Vadym Pozharskyi.

“We have reviewed Joe Biden’s official schedules from the time and no meeting, as alleged by the New York Post, ever took place,” Mr. Bates said.

The Post story cited an email Mr. Pozharskyi allegedly sent to Hunter Biden thanking him for “giving an opportunity to meet your father” and to spend “some time together.” The authenticity of the email correspondence cited by The Post could not be independently verified.

Hours after the Post published its article, Facebook said on Wednesday that it had decided to limit the distribution of the story on its platform so it could fact-check the claims. Twitter said it was blocking the article because it included people’s personal phone numbers and email addresses, which violated their privacy rules, and because the article violated their policy on hacked materials.

Facebook’s and Twitter’s actions immediately provoked strong reactions from Republicans that the social media platforms were censoring them, an outcry that grew louder later on Wednesday when the Trump campaign said the personal account of the White House press secretary, Kayleigh McEnany, had been locked because she had posted the New York Post story. Senator Marsha Blackburn of Tennessee, a staunch Trump ally, called Twitter’s action “despicable” and termed it “the real election interference.”

Facebook, Twitter and YouTube have been under fire from Mr. Trump and other Republicans for years for allegedly censoring their views. The companies, located in liberal Silicon Valley, have denied those claims.

Hunter Biden’s overseas business dealings have been a subject of intense Republican focus over the last year, including his ties to a Ukrainian company, Burisma, while Mr. Biden, as vice president, worked on Ukraine policy. Both Bidens have said that the two did not discuss Ukraine with each other. An investigation by Senate Republicans — and significant scrutiny of the issue over the last year — found no evidence that Mr. Biden, the former vice president, engaged in wrongdoing over his son’s business dealings.

Asked about the prospect of even a brief encounter with Mr. Pozharskyi, a Biden campaign official said that was “technically possible” but very unlikely. The official said there was “no indication at all” that such an interaction had happened, and that regardless, Mr. Biden would not have discussed anything tied to Burisma.