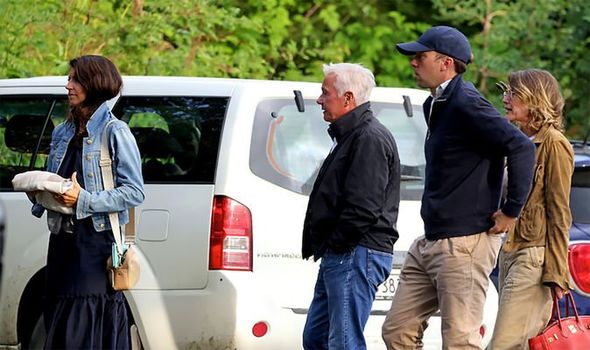 The couple, who were caught breaking Mr Hancock’s own rules with a smooch in the corridors of power – leading him to quit as Health Secretary – have been staying at a two-star lodge deep in the Swiss Alps.

Rooms cost as little as £87 a night and, as an added incentive, there is a promotion offering four nights for the price of three.

It is Mr Hancock and Ms Coladangelo’s first romantic getaway since their relationship was exposed in June.

But it is the second holiday in the space of just three weeks for Mr Hancock, 42, who last month was pictured bodyboarding in Cornwall on a break with his family.

He has since been relaxing at the hideaway 4,265ft above sea level in the remote holiday resort of Villars-sur-Ollon.

On Tuesday evening, just after they arrived, he and Ms Coladangelo left for dinner with friends at 7pm local time.

The couple were driven straight up to the hotel’s guest entrance before they said their goodbyes to their friends, who told them: “Enjoy the rest of your holiday…discreetly.”

Then yesterday morning Mr Hancock was spotted in the car park, placing bags into the boot of a vehicle.

Dressed in the same baseball cap, sunglasses and a face mask, with a white striped shirt over a white T-shirt, he nervously scouted the cars around him.

Then Ms Coladangelo, 44, who he employed as an aide at the Department of Health and Social Care, approached the vehicle and also placed items in the boot.

She was wearing the same denim jacket, sunglasses and a white V-neck blouse.

The no-frills lodge sits on a sunny south-facing terrace high above the Rhone valley and is close to Lake Geneva, overlooked by snow-capped peaks.

It is thought Mr Hancock is also using the holiday for some last minute training ahead of the London Marathon, which he is running for the first time on October 3 in aid of a hospice. Each day the couple have been fortifying themselves with a hearty continental breakfast of pure butter croissants, chocolate bread, brioche, Swiss butter, local seasonal fruit juices, artisan cheeses, Swiss jams and honey.

Mr Hancock could very well have made the long journey to the Alps by car, as he has been seen behind the wheel of a UK-registered blue Fiat 500 every day.

It is believed his estranged wife Martha, 44 – an osteopath – is at their home in Suffolk – Mr Hancock’s constituency.

She is with their three children, who are due back at school. Ms Coladangelo’s children are being looked after by her estranged husband Oliver Tress, founder of fashion and lifestyle store Oliver Bonas, 54.

They also have live-in nanny at their £4.5million south London home.

It is thought the CCTV showing Mr Hancock and Ms Coladangelo in a passionate clinch was taken on May 6, when he was ordering Britons to strictly observe isolation rules.

Ten days later he told Britain to be “careful” when hugging others and to only do it outside. She quit her job as non-executive director of the Department of Health in the resulting furore.

Mr Hancock stepped down on June 26 – the day after the clinch footage emerged – but remains a backbench MP.