WASHINGTON — Pete Buttigieg made history as the first openly gay cabinet member confirmed by the Senate. His husband, Chasten Buttigieg, made the arrangements: He hunted for a home in Washington, organized the move and transported their dogs, Truman and Buddy, across the country in a rental car.

As Pete Buttigieg settled in as the secretary of transportation in the Biden administration, the other Mr. Buttigieg sourced items from Facebook Marketplace to furnish their one-bedroom Capitol Hill apartment. The accouterments included a lamp since the couple had been eating Chinese food on the floor in the dark. The lamp seller kept marveling over how “normal” the newcomer seemed to be, which made Mr. Buttigieg wonder what, exactly, passed for normal in Washington.

The word “normal” is overused in the Biden era, most often to illustrate the relief many people feel to return to politics as usual after four incendiary years of President Donald J. Trump. But Mr. Biden’s ascent also cleared the way for a new class of boundary-breaking politician, starting with Kamala Harris, the first female vice president. In turn, a new class of political spouse is challenging ideas of who should serve as a supporting actor.

Along with Doug Emhoff, the second gentleman, Mr. Buttigieg is now part of a growing club of Washington newcomers married to people who have broken barriers surrounding gender, race and sexual orientation in politics. Dan Mulhern, who is married to Jennifer Granholm, Mr. Biden’s new secretary of energy and the first woman to be elected governor of Michigan, is another member.

Both Mr. Emhoff and Mr. Buttigieg, who became friends and traded supportive texts while their spouses campaigned for the presidency, have both begun the post-campaign process of defining themselves in Washington.

Mr. Buttigieg, 31, was a middle school teacher before he put his career aside to support his husband’s presidential campaign, which began in earnest less than a year after the couple married in 2018. He said that he knew he was privileged to have time to think about what he would do next, but that he felt the responsibility of being one-half of the highest-profile gay couple in American government. “I don’t know that it’s necessarily available for me to just disappear,” he said.

From the rental car on down, little about Mr. Buttigieg’s move to Washington has been typical. The coronavirus pandemic has paused the traditional welcome-to-Washington cocktail parties and the celebrity politicians’ pilgrimages to Cafe Milano. Mr. Buttigieg said he had in any case avoided the flood of introduction emails in his inbox.

Although the transportation secretary makes $221,400, according to government salary data released in January, the Buttigiegs’ life as a cabinet family contrasts with some of their most notable predecessors who lived in suites in the high-end Jefferson Hotel, like Robert E. Rubin, the Clinton-era Treasury secretary, or in multimillion-dollar homes in the Kalorama neighborhood of Washington, like several members of Mr. Trump’s cabinet and inner circle. Nor is Mr. Buttigieg familiar with Washington’s customs and unspoken rules. It is unclear what kind of pointers and tips he will get from his direct predecessor in the transportation spouse department, Senator Mitch McConnell of Kentucky, the Republican minority leader and husband of Elaine Chao.

“It feels like this is maybe a place where innocence goes to die,” Mr. Buttigieg said of the parts of Washington he is now privy to.

In a much-photographed interaction, he recently got coffee with Mr. Emhoff to talk about finding new projects and adjusting to life in the capital, where the Buttigiegs moved from South Bend, Ind.

“Sometimes you just need to get out of the house,” he said, “and check in with somebody.”

Some days, while his husband is at work or fielding Zoom calls from the bedroom, Mr. Buttigieg, who is adapting his memoir, “I Have Something to Tell You,” for younger readers, takes the dogs out. Buddy and Truman have expansive social media profiles, and Mr. Buttigieg is often mistaken as the dog walker by fans.

Balancing his life as a political spouse with his own identity has been trickier than he’d imagined.

“Pete is getting up in the morning, going to work and doing the thing that makes him really happy,” Mr. Buttigieg said. “That thing for me was getting up and going to school every day. Now I have to figure out if that is something I can return to.” 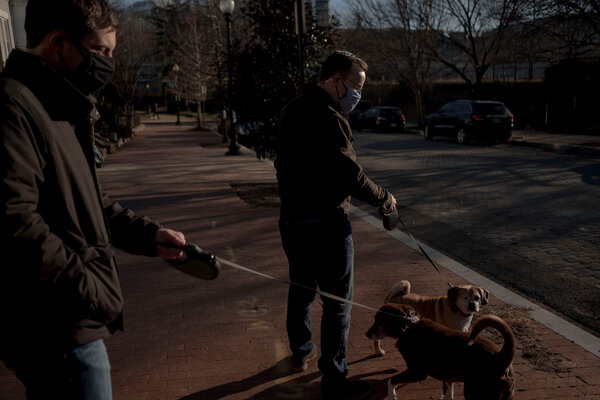 He could learn from several of the women in his orbit. Jill Biden, the first lady, is the first person in her role to work full time, as an English professor at Northern Virginia Community College.

Connie Schultz, a Pulitzer Prize-winning writer who is married to Senator Sherrod Brown, Democrat of Ohio, said she still fielded questions about whether she would continue to work. One of her husband’s Senate colleagues, whom she refused to name, told her that her job was “cute.”

Ms. Schultz is sensitive to the idea that people believe a political wife should be the one solely responsible for showing the public that her husband has a family-focused side, and notices that, in Mr. Emhoff’s case, “nobody’s accusing him of trying to humanize his wife,” the vice president.

“We’re having these conversations now because men are becoming recognized in their spouse role,” Ms. Schultz added. “Which is also frustrating when you’re a woman and have been doing this for quite some time.”

In November, Mr. Emhoff was praised for leaving his law firm, where he had been a corporate lawyer, to support Ms. Harris’s transition to the vice presidency. There was little coverage when he took a job on the faculty of Georgetown Law one month later.

As part of his official duties, Mr. Emhoff has posed for selfies against murals of his wife and handed out cookies with her at a Washington veterans hospital. This week, he traveled with her to Las Vegas and Denver to help sell the particulars of a $1.9 trillion coronavirus relief package. At public appearances, he often looks like he’s just about the only person having any fun in Washington.

Kelly Dittmar, a political science professor at Rutgers University who has written about gender representation in politics, praised Mr. Emhoff and Mr. Buttigieg for speaking openly about their roles supporting a partner in power.

“They’ve both been really willing to talk about it in ways that help us progress forward and push us to think differently,” Ms. Dittmar said.

Mr. Buttigieg said he kept that in mind when he had interactions that felt foreign to him. While he figures out what is next, he is trying to treat each conversation as a call “to remember that you’re here for a certain reason,” he said. “People are accustomed to politics looking a different way, and you’re here to make sure that, you know, it can look a different way.”