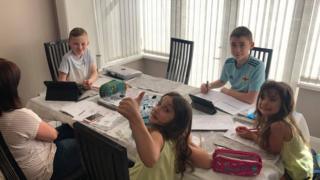 What is the mean and how is it different from the median? How did World War One start? What’s an adverb? Where does photosynthesis take place?

If you’ve googled any of these questions over the past few weeks, you’re not alone.

Every weekday morning, parents are looking for quick refreshers to help them teach their children at home – and we’ve checked the fastest-growing question-based searches in Google Trends.

So what have parents forgotten since they themselves went to school? Read on and find out the answers – along with links to the BBC’s Bitesize lockdown home-schooling resources.

What is an adverb?

BBC Bitesize: What is an adverb?

What is a relative clause?

It’s a part of a sentence that gives information about a noun (naming word). The sentence would still be able to stand without the relative clause. For instance: “We went out for a half-hour walk, which was nowhere near long enough for the amount of energy the children had today.”

BBC Bitesize: What are relative clauses?

It’s a literary technique when words close to each other start with the same sound. Like: “A long, lazy lockdown morning.”

BBC Bitesize: What is alliteration?

Haddy Folivi, a mum-of-two in Essex, says her best subject at school was English, but since working in PR she has been able to rely on proof-readers, and homeschooling as a single parent has taught her how much she has forgotten.

Haddy is flexible about when her six-year-old and her 11-year-old do their studying.

“I’m not a teacher. I’m here to facilitate,” she says.

“I’m more concerned about their emotional wellbeing – I would rather come out of this with sane children than with academically stretched, miserable children.”

What is the mean?

It’s a way of calculating an average by adding numbers together and dividing by the number of numbers – if Emmanuel studies for three hours a day, Temi studies for four hours a day, and Haddy works for eight hours a day, a mean of five hours’ work a day is being done in the Folivi household.

How to add fractions

If the numbers on the bottom – the denominators – are the same, just add the numbers along the top. Easy. Otherwise, you need to make an equivalent fraction, which is slightly more complicated but just requires you to know your times tables.

What is a prime number?

It’s a number that can only be divided by itself and 1.

BBC Bitesize: What are prime numbers?

It might not surprise you that searches for help with maths rise every day, much more so than other subjects.

Douglas Lloyd, a dad-of-three in North London, says: “Adults these days use Excel and calculators. Even if you’re numerate, you aren’t forced to do these calculations.”

He says: “Parents at the moment are out of their depth and feel unqualified to be teaching.

“The patience and love teachers have is incredible.”

Where does photosynthesis take place?

The incredible process by which plants turn sunlight into energy mainly happens in their leaves.

Where is DNA found?

It’s in the nucleus of cells – the middle bit. It contains the genetic information for life to grow and everything living has it – from a lettuce leaf to an elephant.

BBC Bitesize: What is DNA?

Where is amylase produced?

Amylase, the digestive enzyme that breaks starch down into sugars, is made in the salivary glands and in the pancreas.

Joel Lawson, a dad-of-four in Belfast, sits down with the whole family to learn together, as neither he nor his wife can work at the moment. Although he has three science A-levels to his name, before Easter he found himself checking online how to find the atomic number of an element.

“A quick Google and it all came back,” he says. “It was quite amazing trying to remember things I knew that I knew but I never used.”

His 11-year-old, Sam, is at the age when he could be doing the AQE transfer test for entry into second-level schooling, but between the pandemic and the homeschooling situation he has become so stressed out that his parents have stopped him doing practice tests and have stopped mentioning it altogether.

“The kids will suffer educationally and more importantly socially,” Joel says, but “this is an interim thing – we are never going to replace the teachers”.