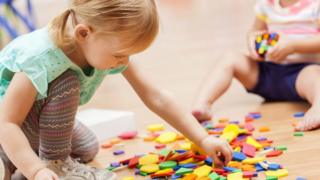 The workforce is “increasingly unstable”, with not enough new entrants to replace those who leave, the study says.

The government says it has boosted funding to childcare providers, in order to help parents get back to work.

But the report urges a total overhaul of early-years careers.

Good-quality early-years provision is key to reducing the attainment gap between children from disadvantaged families and their better-off peers, say the authors.

But this provision is at risk as committed professionals find themselves undervalued, underpaid and unable to make ends meet, they add.

“We must do far more to support workers, otherwise we risk compromising the quality of provision and widening the disadvantage gap.”

Average salaries are pushed down because of the large number of apprentices working in the sector who can be paid as little as £4.15 an hour under government rules and who often move on quickly, says Dr Bonetti.

And self-employed workers find their working hours extended by unpaid paperwork and the requirements of Ofsted, she adds.

Lydia Pryor, who runs a pre-school in Aldborough, Norfolk, told the authors she had recently lost her deputy “because she found another job that pays more, and I had nothing that could entice her to stay”.

“She’s had enough of just making do and worrying about money when her car breaks down.”

Lydia admits: “You could earn more at Tesco”.

In Warrington, Cheshire, childminder Melanie Han says lockdown pushed many in the sector out of business, but as it eases, good-quality childcare will be needed more than ever.

“I think we’re going to have significant behavioural problems to deal with over the coming months.

“Children have missed out on so much at a critical time in their development.

According to Liz Bayram, chief executive of the Professional Association for Childcare and Early Years, childminder numbers are “in freefall”.

“The sector is crying out for a coherent workforce development strategy that supports and incentivises practitioners to continuously improve their skills, gain higher qualifications and progress their careers.”

The report urges the government to convene an expert group to devise a new careers strategy, to include:

Tulip Siddiq , the shadow minister for children and early years, said years of underfunding was “driving talented staff out of the sector and letting down the young children whose life chances are shaped by vital early education”.

She said: “Labour has been calling for targeted support to save the thousands of nurseries and childminding business that are threatened with closure due to Covid-19 but we cannot go back to undervaluing the childcare workforce after this crisis.

“We must invest in them for the sake of the next generation.”

The Department for Education said the government had invested £20m in better training and development for early-years staff, particularly in disadvantaged areas.

“We are supporting their career progression through better qualifications, more apprenticeship opportunities and routes to graduate level qualifications,” it said.

“Nurseries, pre-schools and childminders are a vital support network for families and will play an integral role in this country’s recovery from the coronavirus pandemic.

“That’s why they have received significant financial support over the past months and will benefit from a planned £3.6bn funding in 2020-21 to local authorities for free early education and childcare places.”

The DfE added: “We continue to provide extra stability and reassurance to nurseries and childminders that remain open by ‘block-buying’ childcare places for the rest of this year at the level we would have funded before coronavirus, regardless of how many children are attending.”