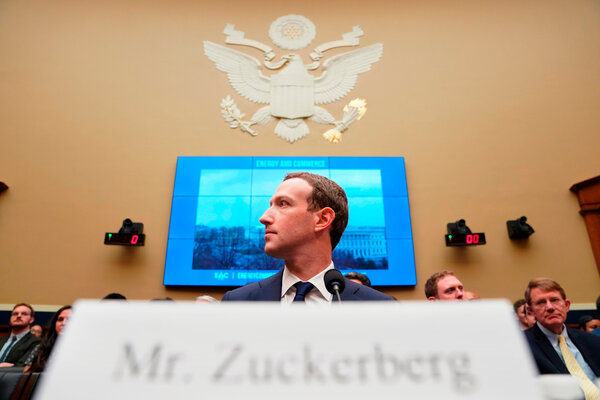 The Federal Trade Commission and more than 40 states sued Facebook yesterday, saying its acquisitions of Instagram and WhatsApp unfairly eliminated competition. They called for Facebook to be split apart and restricted in making future deals, “some of the most severe penalties regulators can demand,” write The Times’s Cecilia Kang and Mike Isaac.

Breaking up is hard to do. Few high-profile antitrust cases have centered on mergers years earlier. “No American antitrust enforcer has ever brought a case like this before, and for good reason,” Jennifer Newstead, Facebook’s general counsel, wrote in the company’s initial retort. You have to go back to the breakup of AT&T in the 1980s for a major case that unwound consummated mergers; “Courts historically have expressed anxiety about doing it,” William Kovacic, a former chairman of the F.T.C., told The Times.

The F.T.C. faced criticism for the $5 billion fine it levied last year against Facebook for mishandling users’ information. Although it was the largest federal penalty against a tech company, critics — including members of the agency’s board — said it wasn’t enough.

Big Tech’s dominance is a source of bipartisan ire, and the federal case against Facebook is expected to continue under President-elect Joe Biden. Attorneys general from 46 states, the District of Columbia and Guam signed the state suit, with only Alabama, Georgia, South Carolina and South Dakota sitting it out. The F.T.C.’s leadership was split — its Trump-appointed chairman, Joseph Simons, and the two Democratic commissioners voted to pursue its lawsuit, with the two other Republican commissioners against.

One of the F.T.C. dissenters, Noah Joshua Phillips, took part in the DealBook D.C. Policy Project discussion about the future of Big Tech, an account of which we published today. Also on the panel were Phil Weiser, the attorney general of Colorado (a party to the suit against Facebook); David Cicilline, the Democratic chairman of the House antitrust subcommittee; Tim Armstrong, the former Google and AOL executive; and more.

A mystery deal. Our colleague Shira Ovide flagged an intriguing M.&A. tip in the F.T.C.’s suit: Facebook made “multiple overtures” to acquire a company whose name is redacted. Presumably it isn’t Twitter or Snapchat, as they are named just before. Any ideas? Let us know.

Covid-19 deaths in the U.S. set a grim record. At least 3,011 fatalities were reported yesterday, surpassing the daily peak in April. In other virus news, the United Arab Emirates became the first country to approve a Chinese coronavirus vaccine, and a South Korean study suggests coronavirus can travel much farther than six feet.

A “Death Star-size trove” of content is planned for Disney+. Today, Disney will announce movies like live-action remakes of “Pinocchio” and “Peter Pan & Wendy” and a prequel to “The Lion King,” all aimed at bolstering its streaming service. (Some will head straight there, while others will debut in theaters.)

G.E. settles charges that it misled investors. The industrial conglomerate will pay $200 million over accusations by the S.E.C. that it hadn’t disclosed important information about its embattled power and G.E. Capital divisions.

BlackRock announces pushes on diversity and climate change. The world’s biggest asset manager said it would back more shareholder proposals for companies to take action on climate and sustainability. It will also demand companies’ racial and ethnic diversity data — and vote against directors who don’t take enough action to fix inequities. Yesterday, Starbucks named Mellody Hobson, the co-C.E.O. of Ariel Investments and one of the top Black women in finance, as its nonexecutive chair.

States step in to help small businesses as federal stimulus stalls. They are offering grants and loans as small businesses cut jobs to survive, but states’ budgets have been ravaged, they have lost tax revenue and they can’t run deficits. Lawmakers in Washington appear to have given themselves another week to reach a stimulus agreement.

The big winners from the I.P.O. gold rush

As public market investors stampede to buy shares in DoorDash and Airbnb, their early backers stand to reap huge gains, in a banner week for Silicon Valley deal makers.

DoorDash nearly doubled its I.P.O. price in its trading debut yesterday. Its shares closed at $189.51. The offering price had been $102, already up from an initial range of $75 to $85. The company is now worth $72 billion, more than Chipotle, KFC, Pizza Hut and Taco Bell combined.

Airbnb priced its I.P.O. at $68 a share, also above expectations. That would make it worth $47 billion, a huge jump from its $18 billion valuation during a fund-raising round early in the pandemic. It will begin trading today on the Nasdaq.

These are signs of an extremely frothy market for tech companies, as investors clamor for a piece of high-growth, loss-making businesses. (“This is insanity,” one venture capitalist told The Times’s Erin Griffith.) Big winners from the frenzy include:

Sequoia, an early backer of both DoorDash and Airbnb. (It also memorably made big bucks in the sale of WhatsApp.) As of this morning, the paper value of its stakes in Airbnb and DoorDash stood at $15.4 billion.

SV Angel, the seed-stage investment firm run by the Silicon Valley mogul Ron Conway, was also a longtime backer of both companies. The firm congratulated them in a blog post that subtly highlighted how it stood to gain.

SoftBank’s Vision Fund put $680 million into DoorDash for a stake now valued at $11.9 billion, one of the tech investor’s biggest wins.

Silver Lake and Sixth Street provided $1 billion to Airbnb in its April round, at an $18 billion valuation.

A prototype of a SpaceX rocket that Elon Musk has dreams of sending people to Mars in flew several miles high yesterday. In attempting to land, it hit the ground too fast and exploded. The company got the data it needed from the test, Mr. Musk said, tweeting: “Mars, here we come!!”

Is Boies Schiller dying, or being reborn?

The elite litigation firm Boies Schiller Flexner has lost about 60 partners this year, including a managing partner it named less than a year ago. The rapid turnover came after the firm’s founder, David Boies, faced criticism for representing clients like Harvey Weinstein and Theranos, and it emerged that the firm had engaged in the ethically questionable pursuit of evidence and hired private investigators who intimidated journalists.

As some question the firm’s survival, DealBook asked Mr. Boies and the firm’s heir apparent, Natasha Harrison, for their take. “The story that’s out there is half right,” Mr. Boies said. “But the firm is not in any way falling apart.” This is how they describe a tumultuous year.

Leaders advanced competing visions, and focus won over expansion, Mr. Boies said. In recent years, partners considered whether to grow into a full-service business with transactional attorneys, or to double down on their litigation specialty. Simultaneously, they considered new leadership (Mr. Boies is 79). Ultimately, Ms. Harrison’s streamlined view of the future won out. Her counterpart Nick Gravante Jr., who left last week, had favored expansion. Each approach has advantages, but Mr. Boies said the firm would focus on “doing one thing really, really well.”

Full-service is old-school, Ms. Harrison argued. “Twenty years ago, clients would go to a big, multiservice firm,” she said, but “now they are much more sophisticated,” seeking specialization. To her, it was clear that Boies Schiller should not “dilute its brand.”

A focused firm with “dynamic, diverse” leaders is “the blueprint for the future,” she said, hinting at leadership proposals to come at tomorrow’s annual meeting.

Big Law’s track record on female leadership isn’t great. A 2017 McKinsey survey found that only 19 percent of equity partners were women, against 46 percent of associates. Notably, though Ms. Harrison and Mr. Gravante were equals, in the prevailing narrative his departure sounded a death knell while her elevation was an afterthought. Mr. Boies contends that the transitional year was intended to feature “experimentation.” Ms. Harrison proved an “excellent manager” with consensus-building skills, he said.

“We’ve got good revenue, very good profits, and we’ve got no debt,” Mr. Boies said, countering criticism that he isn’t forthcoming about financials, another purported signal of the beginning of the end. Ms. Harrison added that a new “banded” compensation model, and associate bonuses deposited in accounts this morning, reflect the firm’s health.

“We’re both determined to win, but we’re not afraid to fail,” Mr. Boies said. The two first-generation lawyers see themselves as outsiders who rose “on the merits” (a phrase they use often). “We’re not scared of making difficult decisions and we’re both extremely resilient,” Ms. Harrison added. Now they will have to prove it, again.

AT&T has reportedly received takeover bids for its DirecTV division that are valued above $15 billion, including debt. It also agreed to sell its Crunchyroll streaming service to Sony for $1.2 billion. (WSJ, Bloomberg)

A SPAC affiliated with Pine Island Capital Partners, the investment firm whose advisers include President-elect Joe Biden’s nominees for secretaries of State and Defense, has raised more than $218 million. (CNBC)

Supreme Court justices appeared skeptical of an investor lawsuit challenging the U.S. government’s decision to sweep nearly all profits from Fannie Mae and Freddie Mac to the Treasury Department. (WSJ)

The U.S. is bringing its first dispute under the revised North American trade agreement. It’s over milk exports to Canada. (NYT)

Hunter Biden, the son of President-elect Joe Biden, said federal prosecutors in Delaware were investigating his taxes, but denied any wrongdoing. (NYT)

Alphabet’s C.E.O., Sundar Pichai, apologized for the departure of an A.I. researcher who was one of the tech giant’s best-known Black female employees, but stopped short of saying the company’s role in her exit was wrong. (NYT)

Morgan Stanley and the Robin Hood Foundation are donating $2 million to help New York City coffee-cart vendors whose businesses have been hit by the pandemic. (Crain’s)

In a $600 million London divorce case, a son says that he lost more than $50 million day-trading in college and is not colluding with his father to hide assets from his mother. (Bloomberg)