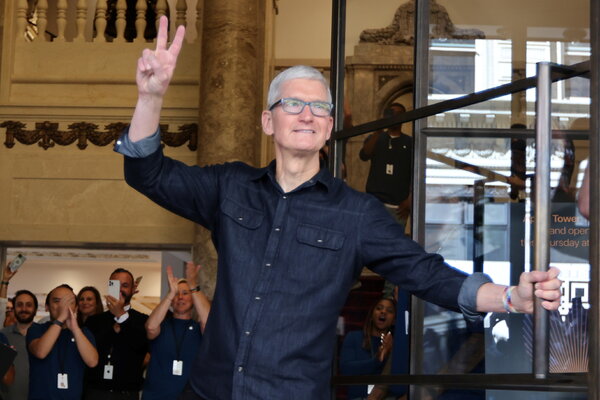 On an Apple device, the one thing you cannot do in Netflix’s app is subscribe to Netflix. A message on the app’s home screen explains this and encourages new users to return “when you’re a member.” It’s up to them to figure out how to do that.

This confusing setup is an effort to comply with Apple’s rules banning apps on its platform from directing users to make purchases elsewhere, and avoiding Apple’s 30 percent commission. But it’s likely to change soon. Apple announced on Wednesday that it would allow some apps, like Netflix and Spotify, to direct their users to payment methods outside of the App Store. That’s the second concession to app developers that Apple has made in the past week, suggesting it’s part of a deliberate campaign. To what end?

Analysts who track Apple said that these changes won’t significantly affect the tech giant’s $20 billion App Store business. Rather, The Times’s Kellen Browning and Daisuke Wakabayashi report, the moves are a strategic retreat, an effort by Apple to repel threats that would be more damaging to its bottom line. (Apple declined to comment.)

Apple is under pressure from regulators around the world who have accused it of exerting too much control over developers who sell products in its App Store. The South Korean Parliament on Tuesday passed a bill that would ban app stores from forcing developers to use only their proprietary payment systems. Apple also faces antitrust investigations in the U.S., the E.U., Britain and India. And it is awaiting the verdict in a lawsuit brought by Epic Games, which sought to avoid Apple’s commissions altogether.

It won’t concede so easily on its cash cow: game revenue. According to Epic’s lawyers, 81 percent of Apple’s App Store revenue came from games in 2016. Apple’s C.E.O., Tim Cook, said on the witness stand in May that the “majority” of App Store revenue still comes from game revenue. Daniel Ives, an analyst at Wedbush Securities, estimates the money Apple collects from apps for consuming content — the type of app covered by the latest concession — is negligible.

There are more substantive changes Apple could make, and is most likely hoping to avoid. It could reduce its commission on in-app purchases, allow other companies to install app stores on iOS devices or allow customers to download apps directly from the internet. The changes Apple has made are aren’t “a real solution,” Daniel Ek, the C.E.O. of Spotify, said yesterday in a tweet. “Our goal is to restore competition once and for all, not one arbitrary, self-serving step at a time.”

In other news, a federal judge yesterday rejected Apple’s request to dismiss a lawsuit brought by users who say that the company’s voice assistant, Siri, improperly recorded conversations and passed the data to third parties.

The labor market gets a health check. Data on August job growth comes out today, with economists expecting a slowdown from June’s and July’s steep gains. But the full effect that the Delta variant of the coronavirus has had on hiring activity may not yet be reflected in the numbers, which were collected early in the month. The Fed is monitoring employment data even closer than usual as it assesses when it can start to pull back on its emergency stimulus measures.

The jury for Elizabeth Holmes’s trial is sworn in. Seven men and five women were chosen to decide the Theranos founder’s fate. Holmes faces 12 counts of fraud and conspiracy to commit wire fraud over false claims she made about Theranos’s blood tests and business. Her trial in San Jose, Calif., will begin next week and is set to last for at least 13 weeks. If convicted, Holmes faces up to 20 years in prison.

General Motors idles factories as a chip shortage takes its toll. In yet another sign that the global shortage of parts is taking longer to resolve, production of some of G.M.’s most profitable vehicles will be suspended while the carmaker temporarily shutters eight plants in North America. Ford is scaling back pickup production, and Toyota cut production by 40 percent this month.

Walmart is raising wages for some 565,000 workers. The retailer’s average wage will rise to $16.40 per hour, though its minimum starting wage, which will rise to $12 per hour from $11, still lags competitors like Target. It’s the latest example of employers trying to attract and retain employees amid labor shortages.

New moves shake up Asian exchanges. Singapore will allow SPAC listings starting today, making it the first major exchange in Asia to welcome the blank-check firms, despite increased scrutiny of them by regulators elsewhere. In China, a new stock exchange aimed at small and medium-size businesses is set to open in Beijing, as the country tries to discourage local companies from listing abroad.

A billion-dollar tax settlement at a well-connected fund

Renaissance Technologies, a pioneering quantitative hedge fund, said a group of current and former insiders agreed to pay as much as $7 billion in back taxes and penalties to the I.R.S. The settlement, ending a decade-long dispute, is one of the biggest in history. It may give a boost to those, including President Biden, who say the I.R.S. is underfunded and unequipped to collect more taxes from the wealthy.

The founder of RenTech, Jim Simons, and a former C.E.O., Robert Mercer, are the biggest names in the settlement. The financiers regularly appear on lists of the highest-paid hedge fund investors, and their political activities add extra intrigue: Simons, who stepped down last year as chairman of the firm, is a longtime donor to Democrats, including to Hillary Clinton’s campaign, while Mercer is a major backer of Republicans, including Donald Trump. (Mercer also bankrolled Cambridge Analytica.)

RenTech pioneered the use of sophisticated math equations and computer algorithms to pick investments and time trades, which has made its flagship Medallion fund one of the industry’s best performers. The I.R.S. claimed that RenTech, in the mid-2000s, used financial instruments called basket options to make short-term gains look like long-term ones, which are subject to lower capital gains taxes.

The I.R.S. ruled in 2010 that the use of batch options was abusive, and a Senate inquiry in 2014 investigated RenTech’s and others’ use of the strategy. RenTech’s C.E.O., Peter Brown, told investors in a letter yesterday that the firm’s board concluded it would be better to resolve the matter with the I.R.S. than risk harsher penalties that could result from litigation.

The settlement comes as some argue the ultrawealthy are hiding huge amounts of tax from the I.R.S. A study this year by academics and researchers from the agency found that the rich were able to hide as much as one-fifth of their annual income from tax collectors. Biden has proposed increasing the I.R.S.’s budget by $80 billion over the next decade, which the White House said could generate $700 billion in additional revenue. But the Congressional Budget Office said yesterday that the potential bounty from increased I.R.S. funding would raise $200 billion, a significant but lower amount.

“Cash has been trash for a long time, but there are now new contenders for the investment garbage can. Intermediate to long-term bond funds are in that trash receptacle for sure, but will stocks follow?”

Some of the academic research that caught our eye this week, in one sentence:

The workers least likely to sign up to mentorship programs benefit the most from them. (Jason Sandvik, et al.)

“The value of space during a pandemic.” (Max Hyman and Ian Savage)

The unthinkable becomes the norm

As the Northeast took stock of the deadly impact of Hurricane Ida, leaders at all levels acknowledged that extreme weather events were posing an increasingly urgent threat. “There are no more cataclysmic ‘unforeseeable’ events,” Gov. Kathy Hochul of New York said yesterday. “We need to foresee these in advance and be prepared.”

In New York, New Jersey, Pennsylvania and Connecticut, at least 43 people died after several inches of rain flooded subway platforms and turned cars and basements into death traps. Around the Gulf Coast, where Ida made landfall, the storm knocked out power for hundreds of thousands in Louisiana and left 16 people dead in the region.

The weather will get more extreme as the planet gets hotter, climate experts have warned, making them unsurprised by the record downpour generated by Ida’s remnants. “The trend is becoming increasingly evident,” said Aiguo Dai, a professor of atmospheric science at the University at Albany, SUNY. “This is exactly what both theory and climate models predicted.”

Global warming is exposing “ever larger communities to extreme climate events,” according to Swiss Re. Natural catastrophes resulted in $40 billion in insured losses in the first half of 2021, the most in a decade.

The planet is facing two separate, but interlinked problems, climate and resilience experts said. First, governments have not spent enough time and money preparing for the effects of climate change. Second, there’s only so much the world can do to adapt, and without a sharp drop in greenhouse gas emissions, countries may run up against the limits of resilience.

How Hurricane Ida got so big so fast.

For the latest updates on Ida’s aftermath, follow our live briefing.

Chevron executives have reportedly met with Engine No. 1, the activist hedge fund that won three seats on Exxon’s board this year. (WSJ)

For retail traders, the SPAC boom has turned into a SPAC bust. (WSJ)

Reddit is reportedly looking to enlist bankers and lawyers to prepare for a $15 billion I.P.O. in New York. (Reuters)

The U.S. arm of the crypto exchange Binance is planning to go public within the next three years, its C.E.O. said. (The Information)

Yoshihide Suga, Japan’s prime minister, is stepping aside after less than a year in office, bowing to public dissatisfaction with his handling of the pandemic and the Olympic Games. (NYT)

Virgin Galactic’s spacecraft are grounded while the F.A.A. investigates irregularities in the flight that took the billionaire Richard Branson to space. (WSJ)

Be prepared and never wing it: Janet Yellen shares her career tips. (WaPo)

The actress Reese Witherspoon is the latest celebrity to hop on the crypto train. (Twitter)

The poet Amanda Gorman’s Estée Lauder contract is a big deal, in every sense of the word. (NYT)

Service businesses in city centers will have to adapt as offices are unlikely to be as full after the pandemic as they were before. (NYT)