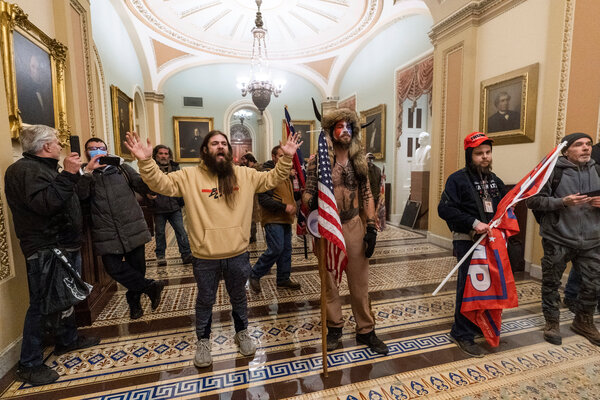 Andrew here. I want to speak with you directly this morning, so this may feel a bit more personal than usual.

The attack on the U.S. Capitol yesterday by supporters of President Trump was among the lowest moments I have seen in my career covering everything from 9/11 to the 2008 financial crisis to the pandemic. It was unfathomable to witness this violent effort to upend the certification of the election, incited by the president. The damage to America’s reputation is real.

This newsletter focuses on the intersection of business and policy. We try not to be political. Yet in this moment when our democracy is under siege, important questions must be asked about business leaders who enabled Mr. Trump and, in turn, share some degree of responsibility for the disgraceful acts that took place in Washington yesterday.

And there were many enablers — educated, smart, articulate, often wealthy people who were willing to ignore Mr. Trump’s threat to democracy in the name of economic growth, lower taxes, lighter regulations, or simply access and proximity to power.

At a time when business leaders tout their “values” and “social responsibility,” how should those enablers — and the institutions they run — be considered after all this?

Take Steve Schwarzman, the Blackstone Group co-founder. He was one of Mr. Trump’s most ardent backers and confidants on Wall Street. Knowing the president’s proclivity to lie and incite his followers, Mr. Schwarzman still supported his election campaigns. Should that matter to pension funds and other investors doing business with Blackstone and its companies?

To his credit, Mr. Schwarzman broke with Mr. Trump and publicly accepted Joe Biden’s election in November. The private equity chief also put out a damning statement last night: “The insurrection that followed the president’s remarks today is appalling and an affront to the democratic values we hold dear as Americans. I am shocked and horrified by this mob’s attempt to undermine our constitution.”

Many of Blackstone’s other senior executives publicly backed Mr. Biden or stayed out of politics altogether. Add it all up, and what does it mean for the company?

What about Oracle’s Larry Ellison and Safra Catz, who held fund-raisers for Mr. Trump? What should their company’s employees now think? And their clients?

And what about Trump cabinet officials who will now be seeking jobs? Will a Wall Street bank or blue-chip corporation hire Secretary of State Mike Pompeo? What about Treasury Secretary Steven Mnuchin?

Then there are politicians like Senators Ted Cruz and Josh Hawley, who helped stir up this moment with provocative challenges to Mr. Biden’s legitimate election win. Business leaders will have to make hard decisions about how to interact with these lawmakers in the coming years.

Business is about accountability, and this sad episode in our nation’s history deserves more of it.

Congress confirms Joe Biden’s electoral victory. At about 3:40 a.m. Eastern, lawmakers finished certifying states’ votes for the president-elect, rejecting challenges from some Republican members. Shortly afterward, President Trump said in a statement that “there will be an orderly transition on January 20th,” while continuing to baselessly allege election fraud.

The Senate officially flips to the Democrats. News outlets declared Jon Ossoff the winner of the second Georgia runoff, after the Rev. Raphael Warnock’s victory earlier in the day. With Democrats winning both of the state’s Senate seats, they now control Congress’s upper chamber, bolstering Mr. Biden’s ability to enact his agenda.

Merrick Garland is Mr. Biden’s nominee for attorney general. The centrist federal judge, whose Supreme Court nomination in 2016 was blocked by Senate Republicans, has bipartisan support. If confirmed, he would lead a Justice Department that some insiders say has become overly politicized.

Scientists warn about U.S. vulnerability to the new coronavirus variant. Health experts said that the highly transmissible strain now surging through Britain could soon spread rapidly throughout the U.S. unless the country adopts better genetic surveillance. Separately, minutes from the Fed’s meeting last month showed concern among officials that rising infections are putting the economic recovery at risk.

Investigators examine a software maker’s potential role in the Russian hacking. American intelligence officials and private cybersecurity experts are focusing on whether hackers infiltrated an app from JetBrains to help break into U.S. government and corporate computer systems.

Corporate leaders and groups were quick to condemn yesterday’s mayhem at the Capitol, with some forcefully criticizing President Trump. Investors, however, were more sanguine.

Cautious words went by the wayside as executives and trade groups assailed those they held responsible for the violence. The National Association of Manufacturers declared the rampage “sedition” — and called on Vice President Mike Pence to invoke a provision of the 25th Amendment to remove Mr. Trump from office.

Even before the mob violence, dozens of C.E.O.s who participated in a virtual summit this week said they were considering withholding donations to lawmakers who sought to impede the presidential transition.

“The lawlessness and violence occurring on Capitol Hill today is the antithesis of democracy, and we strongly condemn it.” — Sundar Pichai of Alphabet

“If this were a Black crowd, if this was a Latino, Mexican, any kind of shaded crowd, they’d be dead.” — Ursula Burns, the former Xerox C.E.O.

“This is not who we are as a people or a country. We are better than this.” — Jamie Dimon of JPMorgan Chase

Markets took things in stride. The Dow set a record, even as the Capitol rampage broke out midafternoon, while the S&P 500 slipped a bit but still closed up 0.6 percent on the day. Stock futures are up this morning.

Investors appeared to be looking past the chaos — as they did during the huge racial justice protests last year — and focusing on the possibility of additional stimulus under a Democratic White House and Congress. “Generally, markets have confidence in underlying institutions and believe that riots will have little or no practical economic effect,” John Authers of Bloomberg Opinion writes.

About the 25th Amendment: Seventeen members of Congress, in a letter sent to Mr. Pence last night, joined calls to invoke the amendment against Mr. Trump. But the law is intended to remove presidents who are incapacitated and unable to govern, not those who merely do “bad things,” the Michigan State constitutional law scholar Brian Kalt told DealBook. It also gives strong protections for a president refuting the claims. “It’s not meant as a substitute for impeachment and removal,” he said. Used together, the amendment and an impeachment ending in a conviction, he said, would immediately disempower Mr. Trump and make him ineligible to run for office in the future.

“Inciting violent treason is not a free speech exercise.”

Facebook and Twitter temporarily suspended Mr. Trump’s accounts yesterday after he published a string of inaccurate and inflammatory messages. The actions followed years of resistance by the platforms to strongly crack down on Mr. Trump’s messages, arguing that all statements from the U.S. president were in the public interest.

The latest on Chinese delistings

The New York Stock Exchange said it would proceed with delisting three Chinese telecom companies by Monday, officially reversing its reversal after facing pressure from the White House, which may expand its market ban for Chinese businesses.

The Big Board said it was complying with new guidance from the Treasury Department declaring that the delistings were necessary to comply with an order barring Americans from investing in companies with ties to China’s military. (To recap: The N.Y.S.E. said on Dec. 31 that it would delist the companies, then backed off that decision this week.)

Enforcement of the orders will be up to President-elect Joe Biden, who faces a dilemma: keep up a tougher stance against a major geopolitical rival, or try to reset relations to avoid the disruption and retaliation that American companies might meet.

On appreciation of the classics

Few edifices inspire Americans, past or present, to wax poetic like the U.S. Capitol. “We have built no national temples but the Capitol; we consult no common oracle but the Constitution,” said Rufus Choate, a Massachusetts senator, in 1833.

The grandeur isn’t accidental. The late-18th-century building, like the layout of the city that houses it, was designed to reflect the United States founders’ expansive democratic vision. Over the years, it has served as both a glorious structure and adored symbol. President Trump issued an order last month deeming the classical style the default design mode for federal construction.

“This temple to democracy was desecrated, its windows smashed, our offices vandalized,” said Senator Chuck Schumer, the minority leader. Members of the mob hung from walls, lounged at lecterns and stole “trophies.” A woman who was shot in the melee was pronounced dead at a hospital.

It dealt a blow to a precious symbol, and the substance it represents, showing that democracy is delicate, however elegant and solid its appearance. The broken windows will be easily repaired, but the shattered norms are another story.

The gaming platform Roblox, which delayed its I.P.O. plans last month, said it would instead pursue a direct listing and announced a $520 million fund-raising round. (Bloomberg)

The insurer UnitedHealth agreed to buy Change Healthcare, a billing and payments processor, for $7.8 billion. (Reuters)

New York State leaders are weighing the legalization of recreational marijuana use. (NYT)

Delays in sending $600 stimulus payments mean that some Americans may need to collect the relief as a credit on their tax returns. (NYT)

Apple boasted of record sales in its App Store over the holidays, as it feuds with developers like Facebook and Epic Games. (CNBC)

Senator Kelly Loeffler lost her re-election bid. Members of the Atlanta Dream, the W.N.B.A. team she co-owns, want her gone as well. (NYT)