A generational changing of the guard is coming to the news industry.

Top journalists who were still in school when newsroom giants of the baby boom generation like Norman Pearlstine and Martin Baron were making their reputations are now in talks with headhunters and news executives, hoping to land one of many big editorial jobs that have improbably come open at the same time.

A series of recent retirements and departures means there are top positions to be filled at Reuters, The Washington Post, The Los Angeles Times, HuffPost, Vox Media and Wired. Of the three legacy news organizations — Reuters, The Post and The Times — The Times is the furthest along in its search.

Mr. Pearlstine, 78, who brought some stability to the Los Angeles daily during a two-year run as its top editor, stepped down in December. He had announced his decision in October, a few weeks after his paper published an article on the lack of diversity in its newsroom. The same article reported on doubts among some staff members concerning Mr. Pearlstine’s leadership. 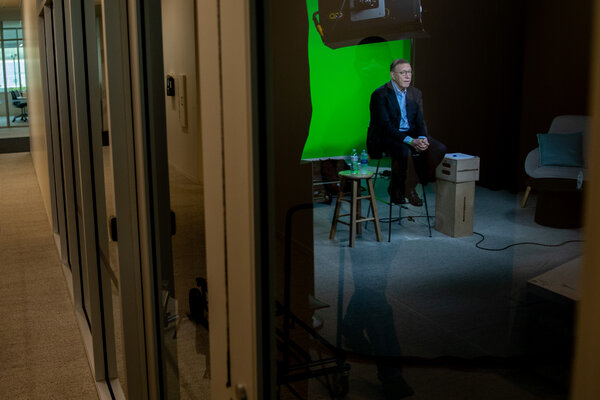 Karen Danziger, the managing partner of the executive search firm Koller Search Partners, is working with The Los Angeles Times’s executives and its owners, Dr. Patrick Soon-Shiong and Michele B. Chan. They have identified some internal candidates and more than a dozen external candidates, according to a person with knowledge of discussions, who was not authorized to talk about them publicly, as well as others involved in recent talks.

The internal candidates include the managing editor, Kimi Yoshino, 49; the editorial page editor, Sewell Chan, 43, a former editor at The New York Times; and Julia Turner, 42, a deputy managing editor who was previously the top editor of Slate. Executives have also discussed Gustavo Arellano, 41, a columnist at the paper who was the editor of OC Weekly, an alternative publication in Orange County.

The executives have also spoken with a number of outside candidates. They include Janice Min, 51, an editor and news executive known for her savvy remaking of The Hollywood Reporter; Sally Buzbee, 55, the top editor of The Associated Press; and Anne Kornblut, 47, who led The Post’s political coverage before becoming Facebook’s head of global curation, including news.

In addition to those three, decision makers at The Los Angeles Times have discussed Kevin Merida, 64, who is ensconced at the Walt Disney Company as a senior vice president and the editor in chief of The Undefeated, the ESPN platform that reports on the intersection of sports, race and culture. Mr. Merida started his career at The Milwaukee Journal and The Dallas Morning News before joining The Washington Post. He spent more than two decades at The Post, rising to managing editor, and left for The Undefeated in 2015.

Los Angeles executives have also considered two high-level editors at The New York Times: Carolyn Ryan, 56, a deputy managing editor who has led the paper’s political coverage, metro reporting and Washington bureau, and Marc Lacey, 55, a former national editor who was promoted to assistant managing editor in December and has been put in charge of live news coverage.

A Los Angeles Times spokeswoman did not comment on specific candidates and said the search was in progress.

The Washington Post is in the early stages of finding its next newsroom leader. Mr. Baron, 66, who led The Miami Herald, The Boston Globe and The Post to numerous Pulitzer Prizes in a 45-year career, announced this week that he will retire in February, ending his eight-year tenure as executive editor. The longtime publisher, Fred Ryan, is leading the search for his successor.

“It’s his call. It’s his decision,” Mr. Baron said in an interview. “I’m happy to offer my thoughts whenever he wants to have them.”

The Post’s owner, the Amazon founder Jeff Bezos, will have a role in the search, a person with knowledge of internal discussions said. Mr. Ryan is looking to hire someone who could lead The Post for at least a decade, the person said.

Senior editors at The Post have informally reached out to potential applicants. A Post spokeswoman would not comment on details of the search, adding that the paper would name an interim editor if it goes past Feb. 28, Mr. Baron’s last scheduled day.

The editor in chief of Reuters, Stephen J. Adler, 65, has said he will retire in April, creating an opening for an editor able to lead a news agency that employs 2,500 journalists around the world. Reuters declined to comment on its search for Mr. Adler’s successor.

Vox, the flagship site of Vox Media, has two high-level openings: editor in chief and senior vice president. Both jobs are held by Lauren B. Williams, one of relatively few Black women to have led a large, general-interest media outlet. In November, she announced that she was leaving for a start-up, Capital B, a site aimed at Black communities nationwide. Vox Media has narrowed its search for the next Vox editor to three finalists, said two people with knowledge of the matter, who were not authorized to discuss it publicly.

HuffPost is not likely to name its next editor until the completion of its sale to BuzzFeed, a deal that was announced in November. Jonah Peretti, who will be the chief executive of the combined companies, is leading the search along with Mark Schoofs, the BuzzFeed News editor in chief.

HuffPost has been without an editor in chief since Lydia Polgreen, a former deputy managing editor of The New York Times who helmed the site for three years, left in March for the Spotify-owned podcasting company Gimlet Media. A BuzzFeed spokesman said the search included “a strong pool of diverse candidates.”

A number of other outlets are on the lookout. Since December, Wired, Condé Nast’s tech-focused magazine, has been looking for a replacement for its editor in chief, Nicholas Thompson, who is leaving to be the chief executive of The Atlantic. Leading candidates for the Wired job, according to three people with knowledge of the search, include Nilay Patel, 40, the editor in chief of The Verge, a site owned by Vox Media, and Megan Greenwell, 37, the editor of Wired.com.

Anna Wintour, Condé Nast’s chief content officer, has final say over the pick. A Condé Nast spokesman declined to comment on details of the search.

As members of journalism’s rising generation fine-tune their résumés, they are keeping an eye on a possible change at The New York Times as its executive editor, Dean Baquet, approaches the paper’s usual retirement age of 66 for newsroom leaders and top executives. Mr. Baquet turned 64 in September, and there has been a recent flurry of promotions among the newspaper’s editors.

“Dean is the best editor in journalism and has repeatedly assured me he’s very happy in the job,” A.G. Sulzberger, the publisher of The Times, said in a statement. “At the same time, Dean and I fully understand the importance of having a robust plan to ensure that the newsroom will be well led far into the future. With a deep bench of incredibly talented editors, I’m confident that will be the case.”

Mr. Baquet has a history at The Los Angeles Times, having served as its top editor for 18 months from 2005 to 2007. The New York Times confirmed that he had recently bought a house in Los Angeles. Since the November election, he has worked from Los Angeles while the The Times’s Manhattan headquarters sit largely vacant because of the coronavirus pandemic. The majority of New York Times employees have done their jobs remotely since March.

“He’s rented an apartment there for a few years, his son lives there, and it’s likely where he’ll settle when he retires,” a New York Times spokeswoman said, referring to Los Angeles. “For now, he intends to be in the office in New York the first day we’re able to be there.”

The generation of Mr. Adler, Mr. Baquet, Mr. Baron and Mr. Pearlstine led the news business through a tumultuous period when readers switched their allegiance from print media to digital. Revenue from print advertising, once the industry’s financial engine, dropped sharply, and one in four newspapers across the country, most of them local outlets, shut down. Some legacy news organizations adapted by emphasizing digital subscribers.

The old-guard newsroom leaders were mostly white and mostly male, and the industry has been slow to install top editors who reflect the changing population of the United States. Stacy-Marie Ishmael, a Black journalist who is the editorial director of Texas Tribune, said she got a “high number of calls” in December from news organizations looking for “diverse” candidates. Three outlets have more recently expressed interest, she added, declining to say which ones.

Tina Brown, the only woman to serve as The New Yorker’s top editor and the founding editor of The Daily Beast, noted that many talented young writers and editors had left journalism for other pursuits, making it important for news outlets to broaden their searches.

“Historically, they’re not particularly imaginative,” Ms. Brown said, “and they don’t want to take a risk in any case.”