In Wall Street’s usually brash way, a new saying is making the rounds. It isn’t in good taste, but it speaks to a phenomenon that is transforming finance and corporate America.

“I know more people who have a SPAC than have Covid,” several financiers have told me recently. (If you’re wincing, you’re not alone. I am, too.)

SPAC stands for special purpose acquisition company, the biggest thing in financial markets of the moment. Hundreds of these publicly traded shell companies are being created by everyone from KKR, the leveraged-buyout firm, to Alex Rodriguez, the baseball player turned entrepreneur. Just on Tuesday, the football player Colin Kaepernick filed for his own $250 million SPAC.

These vehicles have only one purpose: to find a private company and buy it, usually within two years. SPACs are sometimes known as “blank check” companies — as in, investors give them a blank check to go buy a business, sight unseen.

Those checks are getting bigger and bigger, with SPACs raising nearly $26 billion in January, a monthly record in an already red-hot market.

Businesses are lining up to sell themselves to SPACs as a way to bypass the more onerous process of an initial public offering. DraftKings, Virgin Galactic and Nikola are among the companies now trading on stock exchanges after merging with SPACs. Some are thriving. Others not so much.

So why is everyone on Wall Street pursuing a SPAC?

Why else? Money. Lots of it.

“People used to say that hedge funds are a compensation scheme masquerading as an asset class,” William A. Ackman, the famed hedge fund manager, told me. “You could say the same about SPACs.”

Mr. Ackman himself has a SPAC — in fact, the largest raised thus far. What makes his vehicle different, aside from its $4 billion size, is a unique arrangement that makes it tougher for him to score a big payday unless the subsequent merger is successful. 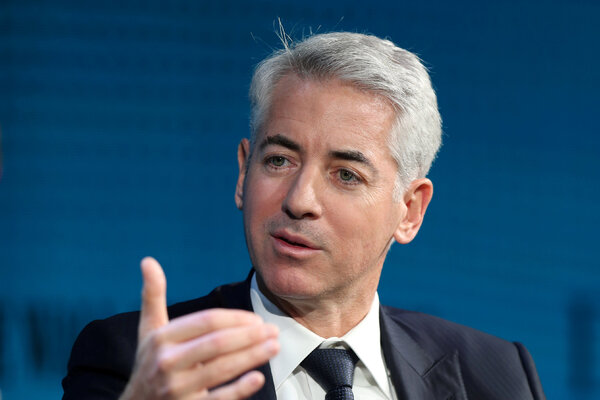 Gary Cohn, the former Trump adviser and president of Goldman Sachs, has a SPAC. So does Shaquille O’Neal.

The economics of running a SPAC are, well, SPAC-tacular. Typically, a SPAC’s sponsor — the person putting up the initial capital — invests a nominal amount in return for 20 percent of the money raised, so long as the SPAC finds a target company and completes a merger. In other words, if a Wall Street executive or celebrity raises $500 million from public investors, that person gets a stake worth $100 million, irrespective of how well the stock of the combined group performs over time.

This is not pay for performance. It is pay before performance. Mr. Ackman, to his credit, set his SPAC up so he gets paid only if the company it acquires hits benchmarks over time.

Companies are racing to go public via SPAC because the sponsor, unlike an I.P.O., can guarantee them a precise amount of money.

Just as important, some of those companies could never bear the scrutiny that comes with an I.P.O.

When a company goes public through the traditional I.P.O. process, it must show potential investors its prior financial records. It is not allowed to make projections about its earnings, because regulators have long worried that companies could mislead investors with unrealistic forecasts.

In a SPAC transaction, which is a merger instead of a listing, companies can publish their financial projections, many of which will prove to be inflated. Since many companies merging with SPACs have no earnings, this has become a useful feature.

“As a guy who was doing deals in the market in 1999, it feels exactly like it did then,” said Terence Kawaja, the founder and chief executive of Luma Partners, a boutique bank. Mr. Kawaja worked as a banker on the most prominent deal of the dot-com boom: Time Warner’s sale to AOL.

“I worry about the public investors,” he said. “They’re going, ‘I bought this SPAC, and it went up.’ Everyone’s a genius in a rising market.”

In truth, an index of SPACs has outperformed the broader stock market. Supporters of the model suggest it allows companies to go public earlier than they would in a typical I.P.O. They say that gives public investors an opportunity to get in early, making the money that had previously gone to wealthy backers.

The truth is that SPACs are rife with misaligned incentives between the sponsor and other investors, particularly those who come after a merger.

JPMorgan Chase crunched the numbers and determined that sponsors, on average, earned a 648 percent return on their money over the past two years. Buy-and-hold-investors who bought in after an acquisition was made — known as a de-SPAC — made 44 percent, which lags the return of a standard market index fund.

The misalignments are stark.

SPAC sponsors say they are putting their reputations on the line, especially if they plan to repeat the process. This is the case for serial sponsors like the tech investor Chamath Palihapitiya, the veteran banker Michael Klein and the buyout specialist Alec Gores. In some cases, sponsors invest some of their own money in the company they are acquiring, better aligning their interests. But remember that they have often already been given 20 percent of the business, so they are playing partly with house money.

SPAC sponsors also try to get established, name-brand investors on board for their launch, which conveys legitimacy to the empty shell. But for some of these investors, it is simply about financial engineering. They have no unique interest in a SPAC, because they have the option to redeem their investments, plus interest, for a modest but predictable return almost no matter what happens with the acquisition. If the deal proves to be a big winner, it’s a bonus.

Uniquely, the sponsor does not have a fiduciary duty to the investors in the acquired company. Very few sponsors seek so-called fairness opinions from third parties to validate the price they are paying for an acquisition. And while mainstream investors increasingly pump extra funds into SPACs at the time of a merger, they typically do so at a lower price than less connected investors.

SPACs try to differentiate themselves by promoting the experience of their managers and relationships with companies that they may acquire. But the sponsor must use the money raised in a SPAC within two years, in most cases, or be forced to return it. That provides an incentive to get a deal done, rather than get the right deal done at the right price and time.

There are more than 300 SPACs with some $100 billion in cash currently seeking acquisitions, according to the data service SPAC Research. Since SPACs typically buy companies five times their size, thanks to outside investments, that implies something like $500 billion in potential buying power.

“We have a massive demand-supply imbalance problem coming. It’s inevitable,” Mr. Kawaja said. “We know how it’s going to end.”

None of this is to say the traditional I.P.O. process is better than the SPAC process. Both have benefits and drawbacks. It is possible that SPACs will become a routine way for certain types of companies to go public.

But some of the misalignments in the SPAC model either need to be fixed or need to be better understood by the public. Some sponsors, like Mr. Ackman, are devising ways to make SPACs more friendly to later investors (competition will do that).

SPACs are not new, although all the hype makes them seem that way. They have been around for years but were until recently considered a shady corner of the financial world. We’ll see soon enough whether there was a reason for that.