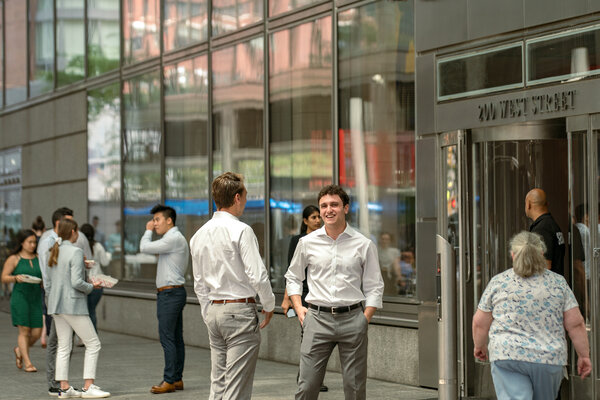 Hardly a day goes by without a big bank announcing a significant rise in starting salaries for its youngest employees. JPMorgan Chase, Citigroup, UBS and Morgan Stanley are now paying first-year bankers $100,000, while Evercore, Jefferies and Goldman Sachs will pay $110,000. In most cases, base salaries for first-year analysts were previously $85,000 to $95,000.

The raises come as the heavy workloads caused by high deal flow have led to complaints about burnout in the junior ranks. A notoriously grueling job has become even more challenging during the pandemic, junior bankers say, given the lack of camaraderie and networking when working in isolation from home. The surge in coronavirus cases as a result of the Delta variant has made return-to-office plans less certain, complicating many banks’ aggressive push to bring people back in the office, in part for the sake of morale.

More money could help attract and retain junior bankers, but now that most of the major players have landed at about the same rate, it isn’t necessarily a competitive advantage. Flexible working schedules for those back at the office, Zoom-free Fridays and other non-monetary perks could help. More immediately, it’s worth watching to see if pandemic precautions at the office become a differentiator in Wall Street’s war for talent.

Jefferies said yesterday it will mandate vaccines for those returning to the office, a decision made partly in response to the Delta variant. The bank’s executives said in a letter last month that while “the vast preponderance” of workers at the bank were vaccinated, it recorded 40 new cases of Covid, mostly mild but including two “short hospitalizations.” Morgan Stanley also has a vaccine mandate for staff and visitors to its New York offices, while other banks, like Goldman Sachs, require employees to log their vaccination status before coming to the office but don’t mandate vaccination. Bank of America has said it is focused on bringing back vaccinated employees first to to corporate headquarters next month.

It’s a different calculation for the biggest banks, with universal policies hard to impose on operations across the country, from Wall Street offices to Middle America retail branches. As some banks, like Wells Fargo, have recently delayed their planned office returns, JPMorgan Chase announced only that it was reinstating mask requirements for all U.S. employees, many of whom are back in offices on rotations. But a memo to staff from the bank’s operating committee flagged a potential change to its workplace policy down the road: “We deeply appreciate your efforts and will continue with our previously stated return to the office schedule as we learn more about how hybrid working may work for our company.”

The Tokyo Olympics draw the lowest Summer Games audience ever for NBCUniversal, which began covering them in 1988. The network averaged 15.5 million prime-time viewers, a 42 percent decline from the Rio Olympics in 2016. Still, NBCUniversal said the broadcast was profitable, bringing in about $1.2 billion in ad revenue.

SoftBank’s earnings slip. The Japanese tech conglomerate said that its latest quarterly profit fell nearly 40 percent from last year, dragged down by a fall in the value of investments like the Korean e-commerce company Coupang. SoftBank’s portfolio is also heavily exposed to Chinese tech companies like Alibaba, which may dampen future results given Beijing’s crackdown on the sector.

Jeffrey Epstein’s victims get a big payout, as court cases continue. A fund created to compensate victims of sexual assault by the late financier has paid out just over $121 million to more than 135 people. A new legal filing against the billionaire private equity investor Leon Black claims he once flew a Russian model to Florida against her will to meet Epstein, while a lawsuit filed by Virginia Giuffre, a prominent Epstein accuser, sued Prince Andrew in New York, accusing the British royal of sexually abusing her when she was 17.

New Jersey can compel Smith & Wesson to turn over documents in a key gun case. The state’s highest court ruled in favor of the attorney general, who is trying to obtain internal information from the gun maker in a case that accuses the company of false advertising. As we have written, the novel move has the potential to reveal what gun industry executives say behind closed doors about their products, which could provide material for broader gun-control actions.

Barstool Sports and M.L.B. are reportedly in talks about a broadcast deal. Sources told the New York Post the deal had a “50-50” shot of going through, which would focus on in-game gambling during games. The irreverent Barstool site, founded by Dave Portnoy, attracts both a younger-skewing audience and controversy over its attitudes toward gender and race, which some say could push away a key source of growth for baseball broadcasts: women.

The $1 trillion bipartisan infrastructure bill is expected to pass a final vote in the Senate this morning and move on to the House. Democrats there say passage is contingent on approval of a $3.5 trillion budget package, setting the stage for lots more horse-trading, ultimatums and disputes.

The proposed budget, more than the narrower infrastructure bill, advances the Biden administration’s social policy priorities by expanding investment in health care, child care, education, climate change and more. The budget is unlikely to garner support from Republicans, so it would require a united front from Democrats to pass, given their narrow control of both chambers.

The question now, and for weeks to come, is how to pay for things. One way is through a minimum tax on corporations, proposed yesterday by senators Elizabeth Warren, Democrat of Massachusetts, and Angus King, Independent of Maine. (It’s similar to a proposal floated by Warren when she was running for president.) They want businesses reporting profits of $100 million or more to investors to pay a minimum 7 percent tax, saying it will affect at least 1,300 public companies and raise $700 billion over a decade.

“Like every other proposal, we have a ways to go,” King said. The senators haven’t tested the tax on centrist colleagues Kyrsten Sinema of Arizona and Joe Manchin of West Virginia, whose support is key to the Democratic budget bypassing a Republican filibuster. But Warren famously brings previously unthinkable progressive ideas into the mainstream, like student loan forgiveness. Can she do the same for a major change to the way corporate taxes are collected?

Warren said that she believes, based on discussion in the Democratic caucus, that her colleagues support taxing big corporations to fund social programs. And when President Biden was campaigning, he also supported a corporate minimum tax, she noted, but her plan raises more revenue.

The sky isn’t quite the limit. A potential snag to the Democrats’ budget blueprint is that it doesn’t address the approaching federal debt limit. Treasury Secretary Janet Yellen wrote to lawmakers yesterday urging them to raise it for the sake of existing needs, not only future goals. (It was her third such warning in recent weeks.) “Failure to meet those obligations would cause irreparable harm to the U.S. economy,” she wrote.

“While there are no guarantees as to what the future will bring in a still infection-impacted world, one can look ahead and envision a happy Hollywood ending to this story.”

— Adam Aron, the C.E.O. of AMC Entertainment, on reporting a smaller-than-expected loss at the theater chain, whose market fortunes were transformed when it became a meme stock earlier this year. Aron also said that the company would accept Bitcoin for ticket purchases by the end of the year.

Employers in the U.S. had 10.1 million open jobs at the end of June, the Department of Labor reported yesterday. It’s the first time that measure has reached eight figures. A high number of available positions typically signals economic strength, but that might not necessarily be the case in the pandemic-altered labor market.

In late 2018, there were 1.5 million more available jobs than there were Americans looking for work. Right now, with 9.5 million Americans out of work, that difference is 600,000. But as Elise Gould of the Economic Policy Institute pointed out, if you consider people without jobs not actively looking for work, who are not counted as part of the official unemployed, the ranks of the jobless far out number open positions.

Some economists think the job market, which is supposed to match workers with employers, is broken. It may not be quite as dire as that, judging by these latest numbers, because many of the excess job openings are concentrated in a few industries, including hotels, restaurants and hospitals. Nearly 3.9 million employees also quit their jobs voluntarily in June, close to a record, which suggests that workers are shopping around for better opportunities. And for the second month in a row, employers overall added more workers than open positions, a benchmark that took years to reach after the last recession, and a step in the right direction for repairing the damage wrought by the pandemic.

Canadian Pacific upped its bid for the Kansas City Southern railroad to $31 billion, another twist in its takeover battle with Canadian National. (Canadian Pacific)

GreenLight Biosciences, a health tech firm backed by James Murdoch that is working on RNA vaccines, is going public by merging with a SPAC at a valuation of $1.5 billion (WSJ)

Inside the fight over Covid disinformation that soured the relationship between the Biden administration and Facebook. (NYT)

India’s top court said that antitrust investigations into Amazon and Flipkart will go ahead. (Reuters)

Biden’s push to switch to electric vehicles won’t work for everyone. (NYT)

Will Lina Khan’s “fundamental revamp” of the F.T.C. succeed? (FT)

“Outgunned” crypto lobbyists failed to alter a tax provision in the infrastructure bill set to pass the Senate, but they can try again with the House. (Bloomberg)

Lee Jae-yong, Samsung’s de facto leader who was imprisoned for bribery, will be released on parole. (NYT)

Average pay for supermarket and restaurant workers has risen above $15 an hour for the first time. (WaPo)

Bill Gates is dropping down the rankings of the richest people as he transfers stock to his ex-wife, Melinda French Gates. (Forbes)

“Life loves on” is the motto for a family that is still struggling to process their grief from losing their son on 9/11. (The Atlantic)