Ryan Reynolds, Samuel L. Jackson and Salma Hayek are back for a rude and rowdy sequel. 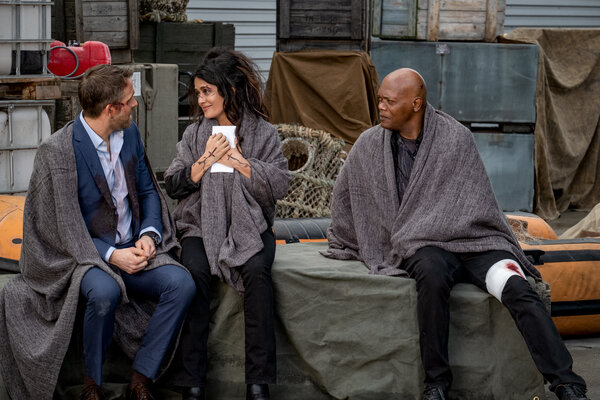 “The Hitman’s Wife’s Bodyguard” is loud, lazy, profane and well nigh incoherent. It’s also at times quite funny, with a goofy vulgarity that made me giggle. There isn’t a whit of wit from one end to the other; instead, this trashy-to-the-max sequel to “The Hitman’s Bodyguard” (2017) lunges shamelessly for the lizard brain. In the eyes of American action comedies, we are all reptiles.

Four years after a traumatizing encounter with the assassin Darius Kincaid (Samuel L. Jackson), Michael Bryce (Ryan Reynolds), the once-triple-A-rated bodyguard, has lost his career and possibly his mind. His therapist suggests an Italian vacation and a sabbatical from guns and mayhem. Yet barely has he taken her advice, packing only pepper spray and Chekhov’s pen knife (old habits die hard), when he’s hijacked by Darius’s wife, Sonia (Salma Hayek), a fuming, foulmouthed con artist.

While the screenplay — by Tom O’Connor (who wrote the first film), Phillip Murphy and Brandon Murphy — struggles to make one lick of sense, the performers retreat to their comfort zones. For Jackson, that means being so laid back at times he’s almost supine; for Reynolds, whose character sustains more abuse than a crash-test dummy, it means reminding us that wisecracks are the best weapons. Morgan Freeman shows up in a role I won’t spoil, and poor Frank Grillo — apparently unaware he’s in a cartoon — plays a Boston cop-turned Interpol agent with an admirably redundant solemnity.

Hayek, thankfully, harbors no highfalutin’ illusions about Sonia, whose Chaucerian way with a curse is matched only by her double-D libido and industrial-strength vocal cords. The performance is at once exhausting and awe-inspiring, making Sonia’s frustrated desire for a child one of the film’s more horrifying subplots. Yet, hearing Sonia wail over the disappointing dimensions of her vagina, I also heard the hoofbeats of the next movie. Any takers for “The Hitman’s Wife’s Surrogate’s Bodyguard”?