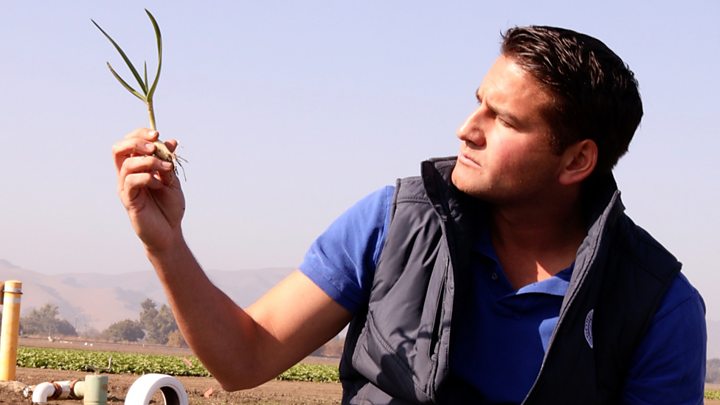 US garlic growers say they have finally started to win their 25-year battle with Chinese imports – thanks to President Donald Trump.

The president slapped a second round of tariffs on garlic from China this year, boosting demand for the US-grown crop.

“It is untrue that there are no winners in a trade war,” says Ken Christopher, executive vice president of California-based Christopher Ranch, the nation’s latest garlic producer.

“When President Trump’s tariffs for garlic kicked in, it was at that point that California garlic truly became competitive.”

US garlic growers have complained since the early 1990s that China was flooding the US with the pungent vegetable, selling it at below the cost of production. This is a trade practice known as “dumping”.

The US government investigated, and back in 1994 agreed that some Chinese firms were indeed selling their garlic in the US “at less than fair value”.

As a result, any Chinese company found guilty of the practice was hit by a whopping 377% duty. However, Chinese firms soon found ways around these case-by-case penalties, such as by simply setting up new shell businesses.

Mr Christopher likened it to “playing whack-a-mole”, and cheap Chinese garlic continued to flood into the US. As a result of this, of the 12 US commercial garlic farms that existed in the 1990s, only three of the largest producers survived.

Today the remaining US garlic farmers say that Trump’s tariffs on Chinese garlic are working because they apply across the board and straight away – there is now no way for the importers to get around them.

US tariffs on Chinese garlic were first set at 10% in September 2018, before rising to 25% from May of this year. 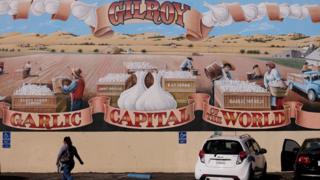 “Trump’s tariffs are all assessed and billed up front,” says Mr Christopher. “So it is impossible for dumpers from China to evade them.”

Christopher Ranch was one of the three US garlic producers that made it through the 1990s. Today it harvests more than 100 million pounds (45 million kg) of the bulbs every year, supplying almost one third of all fresh garlic consumed in the US.

Mr Christopher says that the family-owned business has seen sales soar since the tariffs on Chinese imports were first put in place.

“We’re seeing growth year-over-year of between 6 to 23% every week on our fresh garlic,” he says. “It may not seem like a lot, but when measured in millions of pounds [in weight of sales] it makes a huge difference to our bottom line.”

To access the impact of the tariffs, the BBC looked at daily prices measured by the US Department of Agriculture.

Fourth generation Californian farmer Jack Vessey is, however, missing out on the renewed demand for US garlic – his family business Vessey & Company stopped growing the crop a number of years ago, as they couldn’t make it profitable in the face of the Chinese imports.

“Stepping away from the garlic business was a very difficult decision for me,” he says.

“There were three generations before me who dedicated much of their lives to garlic. [But] I decided that if there was a chance for our business to survive into a fifth generation we had to divest our garlic holdings.”

For almost 100 years his family had grown garlic together with other vegetables, such as cabbage and cauliflower.

Rivals is a season of in-depth coverage on BBC News about the contest for supremacy between the US and China across trade, tech, defence and soft power.

“Garlic, for many years, accounted for more than 50% of our receipts,” adds Mr Vessey. “But once the Chinese began dumping product in the US market, we started to cut back on our acreage and build other sectors of our business.”

Frank Lavin, a former Under Secretary for International Trade at the Department of Commerce, explains that the problem with the levy introduced in 1994 was that the Chinese importers were too fast on their feet.

“They would be discovered and sanctioned, and then they would simply set up another dummy structure,” he says.

“The fact is they were more nimble, occasionally, in setting up these entities than US Customs could be in discovering them.”

Mr Christopher says that – by contrast – President Trump’s tariffs “are very easy to enforce because garlic can’t even enter the country now before the tariff is billed to them. That’s what’s tactically changing the game.”

He adds that the media is wrong to attack the president’s strident tariff policy – the US has now put in place tariffs on $200bn of Chinese goods.

“It’s been a difficult thing to talk about, as the media continually simplifies the tariffs as injuring farmers, whereas it actually benefits the domestic garlic industry,” says Mr Christopher.

More from the BBC’s series taking an international perspective on trade:

However, trade experts caution that higher costs are likely to be passed onto consumers.

“If you are a domestic firm that is being sheltered from foreign competition by tariff walls, then you tend to like tariffs because it keeps out foreign competition,” says Deborah Elms, head of the Temasek Foundation Centre for Trade and Negotiations.

“But what that does is keep out foreign competition and allow domestic competitors to potentially provide goods that are less competitive in the longer run.”

Mr Christopher says that while he understands that it is “not in the long-term macroeconomic interest of the US to engage in trade wars, our industry needed immediate relief”.