When Jamie Dimon, the chief executive of JPMorgan Chase, issued a statement condemning the violence in Washington on Wednesday, he urged “our elected leaders” to call for an end to it. He did not directly mention President Trump.

Nor did the Charles Scharf, the chief executive of Wells Fargo (“The behavior in Washington, D.C., today is unacceptable”) or the chief executives of Goldman Sachs, Bank of America or Citigroup. Business leaders and organizations often instead referred to “leaders” or called for “the peaceful transition of power” to President-elect Joseph R. Biden Jr.

Business leaders have rarely criticized Mr. Trump directly. When he announced, shortly before he was inaugurated, that Stephen K. Bannon would be his chief strategist in the White House, Democrats on the congressional committees that oversee the finance industry asked industry leaders to publicly oppose the appointment. The lawmakers called Mr. Bannon a “bigot beloved by white supremacists” and said the business leaders had “a moral obligation to speak out.”

After Mr. Trump took office, chief executives found themselves in the uncomfortable position of deciding whether to take part in so-called business advisory councils, common forums for business leaders to influence the policy of a new president, even as he was rolling out policies many saw as hateful. Several such councils disbanded after Mr. Trump declined in 2017 to condemn violence by white supremacists in Charlottesville, Va., and said there were “very fine people” and “blame” on “both sides.”

With the president’s increasing efforts to subvert the election, organizations have grown bolder. On Monday, for example, 170 business leaders signed their names to a statement, organized by the business advocacy organization Partnership for New York City, urging Congress to certify the result of the presidential election, though some prominent members were missing.

On Wednesday, as a mob stormed the Capitol, organizations not known for vocal statements seemed to no longer worry about the political ramifications of speaking up against Mr. Trump.

The research group High Frequency Economics suspended regular publication of its research notes for the first time since the Sept. 11, 2001, attacks and sent a note to its clients: “We at High Frequency Economics are disgusted by the role of the president of the United States in inciting this riot, and we are saddened that he cannot find the character to stand up in front of the mob he has created, quell the violence and send everyone home.”

And the Business Roundtable, a group of chief executives, including Mr. Dimon, from some of the nation’s largest companies, was direct as to the cause of the violence.

“The chaos unfolding in the nation’s capital is the result of unlawful efforts to overturn the legitimate results of a democratic election,” the group said. “The country deserves better. Business Roundtable calls on the president and all relevant officials to put an end to the chaos and to facilitate the peaceful transition of power.” 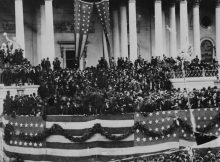