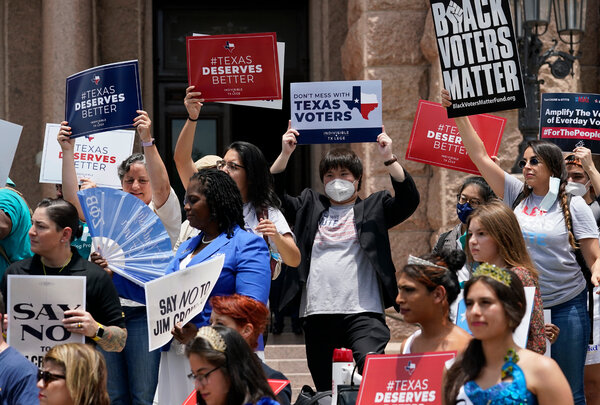 Companies in Texas look to Washington

The Republican-controlled Texas Legislature this week passed a major bill overhauling election laws in the state, the latest of many to tighten voting rules this year. In Texas, as elsewhere, many businesses and industry groups have spoken out against the move, arguing that it is bad for the economy.

Texas has attracted many companies to relocate or expand operations there with its business-friendly policies. But in taking a stand on voting rights, some companies have invited scrutiny of their words and actions, especially with political donations. Balancing this against the tightening of some of the country’s strictest voting rules will test companies’ social pledges with financial imperatives. There is also the risk of political blowback for speaking out in a state with a Republican governor and a Republican senator embracing restrictive voting rules as a platform for potential presidential runs in 2024.

“It is about ensuring that all Texans trust the outcome of every election in Texas,” Lt. Gov. Dan Patrick, a Republican who presides over the Texas Senate, said in a statement. In the day or so after the voting bill passed, the first reaction of Texas-based businesses that spoke out on ballot access appeared to be to pivot to Washington, putting pressure on Congress to pass federal voting protections.

“We hoped for a different outcome,” an American Airlines spokesperson told DealBook. The Fort Worth-based company had sought legislation “making it easier to vote, not harder,” issuing a statement in April opposing the law. In May, the airline also joined Fair Elections Texas, a nonpartisan coalition of about two dozen businesses — including Microsoft, Unilever and Levi Strauss — that called on lawmakers to expand ballot access. A spokesperson for Dell, which is based in Round Rock, said it would encourage employees to vote and urge political leaders to “focus on staying committed to a healthy and welcoming business climate for all Texans.”

“Texans love Texas,” but they want Washington’s help, said Nathan Ryan, an Austin city commissioner and the C.E.O. of the consulting firm Blue Sky Partners, part of the Fair Elections Texas group. He and others are strategizing, he said, and will approach the Biden administration and congressional leaders to press for passage of two federal voting rights laws: the John Lewis Voting Rights Advancement Act and the For the People Act. (Both passed the House but have stalled in the Senate amid a Republican filibuster.)

There is “an immediate need for a national minimum standard for voter protection,” said David Clunie of the Black Economic Alliance, an organization behind a letter in April with hundreds of signatories condemning laws restricting ballot access. New “categories of attack” are being created, like introducing criminal penalties for election administrators, said Sarah Walker of the nonpartisan group Secure Democracy, which businesses and industry groups turn to for help understanding these bills.

“The clock is ticking. The U.S. Senate must act,” said the Texas House member Rafael Anchia, a Democrat. The Texas bill will be put in place in about 90 days, he noted, calling on “those in the seat of democracy to pass a national voting rights bill.”

In other news, the Supreme Court last night decided not to block a Texas law that went into effect yesterday and prohibits most abortions after six weeks, making it the most restrictive in the nation.

Purdue Pharma is dissolved in a wide-ranging bankruptcy settlement. A judge approved the move to wind up the maker of the opioid OxyContin, and force the Sackler family, the company’s owners, to pay $4.5 billion to fund addiction treatment programs. Several states said they intended to appeal the settlement, which would end thousands of lawsuits and largely shield the Sacklers from Purdue’s opioid-related liability.

Remnants of Hurricane Ida batter the Northeast. Nearly every subway line in New York City was shut down and Mayor Bill de Blasio declared a state of emergency as the city struggled with record-breaking rainfall. At least eight deaths were reported from flooding in the region, and hundreds of thousands of people were left without power. It is a foreboding vision, many said, of how climate change produces more extreme rainfall during storms.

The Justice Department may file a second antitrust case against Google. This one would focus on the tech giant’s power in the digital ad space, and would follow a government lawsuit last year that claimed that Google abused its position in search. Apple, which is fighting an antitrust legal action about its App Store, unveiled more changes yesterday that allow apps to do business directly with customers.

A safety inquiry of Tesla’s driver-assistance system advances. The National Highway Traffic Safety Administration yesterday ordered the electric vehicle maker to hand over data about its Autopilot system, part of an investigation into Tesla vehicles crashing into emergency vehicles (there was another crash this weekend).

Amazon is going on a hiring spree. The tech giant’s C.E.O., Andy Jassy, told Reuters in his first interview since taking over the e-commerce giant that he planed to expand its tech and corporate work force by 20 percent, or 55,000 employees. In other Amazon news, the company’s air cargo operation now runs up to 164 flights a day.

In just under two weeks, shareholders in Atlas Crest Investment Corp., a special purpose acquisition company led by the investment banker Ken Moelis, will vote on a proposed merger with Archer Aviation, a maker of electric flying taxis. Atlas Crest and Archer, which is embroiled in a legal fight over trade secrets, cut the value of the deal by $1 billion, to $1.7 billion, in July. This week, they reduced the number of shares they planned to issue as part of the merger.

The latest move to sweeten the deal was in response to a report by ISS, the shareholder adviser, that recommended SPAC investors redeem their shares for cash instead of sticking around after the merger. A unique feature of SPACs is that they allow pre-merger shareholders to redeem their shares at the I.P.O. price. ISS said that because the SPAC’s shares weren’t trading “materially” above their offer price, investors were better off choosing “the relatively riskless redemption option.”

High redemptions are a thing now. As pre-merger SPACs’ share prices languish, for a variety of reasons, shareholders are redeeming in larger numbers. That deprives the target company of the cash raised by the SPAC. (The mergers are almost always approved, even if a majority of shareholders redeem.) For its part, Archer has $600 million in additional funds lined up from investors including United Airlines, alongside the $500 million it expected to tap in the SPAC.

By the numbers: An average of 58 percent of shares were redeemed in SPAC mergers that closed last month, according to SPAC Research. Among them was a SPAC run by the tech moguls Reid Hoffman and Mark Pincus, which completed its merger with Joby Aviation, a competitor of Archer in the flying taxi space, with 62 percent of investors redeeming their shares.

“I have no idea what I’m going to do once these benefits stop.”

— Amanda Rinehart, one of nearly a half-million jobless workers in Pennsylvania who will lose federal emergency unemployment benefits when they expire this weekend. In other states, where the benefits were cut off earlier, job growth has been little different from that in states that retained the programs. Rinehart said she was considering borrowing money from her grandmother or selling blood plasma to feed her and her son.

The Taliban swiftly seized power in Afghanistan, but now they must overcome the country’s financial problems, The Times’s Alexandra Stevenson reports. During two decades of American control, the Afghan economy significantly increased in size but also became deeply dependent on foreign aid, which is now being cut off by the U.S. and others.

More than three-quarters of the $11 billion spent each year by the Afghan government was provided by foreign governments or donors.

Afghanistan exports $870 million a year in goods — mostly carpets, as well as figs, licorice and other agricultural products — which is small in relation to its $20 billion economy of nearly 40 million people.

Much of the country’s transactions flow through informal and unregulated dealers called hawalas that in the past have helped stabilize the currency, the afghani.

Financial stability is in short supply in Afghanistan. A freeze on the nation’s $9.4 billion in reserves held outside the country has caused the value of the afghani to plunge. Prices of flour and eggs have surged as much as 20 percent. Banks have long lines of people looking to withdraw their cash.

“We have conflict. We have war. This is another misery,” said Shah Mehrabi, a board member of Afghanistan’s central bank, about losing access to foreign funds. “You will have a financial crisis, and it will push families further into poverty.”

The Taliban will have to build foreign ties to shore up the country’s finances. With the U.S. and other Western nations not an option, the Taliban have established trade with Iran, and will also most likely seek out relations with China and Pakistan, who experts think are the group’s most likely allies. In the meantime, more of Afghanistan’s economy will go underground, which may make it hard to enforce a pledge to stamp out the nation’s illegal opium production, estimated to generate more than $1 billion a year in sales.

Alex Rodriguez’s SPAC has ended talks over a $3 billion merger with Panini after the memorabilia maker lost its N.B.A. and N.F.L. licenses. (Bloomberg)

iFit Health, which owns the NordicTrack brand, has filed to go public, riding the boom in at-home exercise equipment. (Insider)

Walmart is teaming up with Instacart to make grocery deliveries to some parts of New York City. (WSJ)

Businesses are pushing the Biden administration to drop tariffs on Chinese goods and provide more clarity about the critical trade relationship. (NYT)

Some $90 billion of the government’s emergency pandemic aid was paid out to improper or fraudulent claims. (Bloomberg)

Workhorse, the electric truck maker, is under investigation from the S.E.C., making it the fourth inquiry into an electric automaker in the past year. (WSJ)

Employees at UBS who don’t want to get vaccinated against the coronavirus can apply to work from home, the bank’s C.E.O. said. (Bloomberg)

Joe Rogan, a podcasting giant who has been dismissive of vaccination, has Covid. (NYT)

As Goldman Sachs and others move some operations to Florida, a “Wall Street South” is emerging in West Palm Beach. (Bloomberg)