One Saturday in mid-December, Chris Vernon was driving as fast as he could to a GameStop in Memphis. He had spent weeks combing the internet for new PlayStation 5 consoles, and had just heard about a new shipment’s arrival at a store nearby. It was the only present his 10-year-old son, William, wanted for Christmas.

The problem was, lots of other children around the country were asking for new video game consoles, too.

Mr. Vernon, a local sports radio host and podcaster for “The Ringer,” arrived too late. He waited in line for four hours before being told that the store had run out. He returned home, “crestfallen,” to tell William the bad news.

Since their highly anticipated release in November, the new generations of consoles — Microsoft’s Xbox Series X and Sony’s PS5 — have been in short supply. Gamers have flooded online stores in the hundreds of thousands, crashed websites, lined up outside stores and shaken their fists in frustration when scalpers snagged devices, then resold them for double the price. 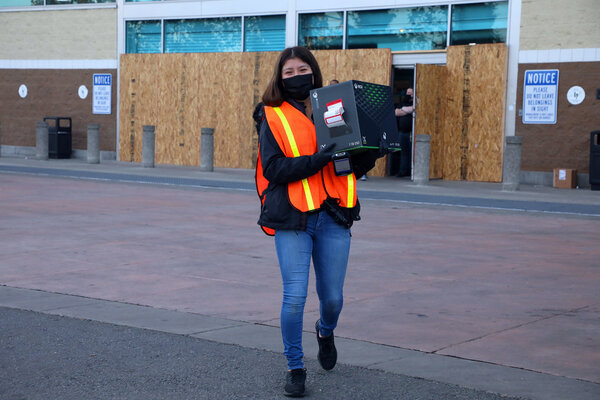 Microsoft and Sony would not give sales totals for the devices, which arrived on the market during a pandemic-fueled surge in gaming. But David Gibson, the chief investment officer at Astris Advisory, a financial advisory firm in Tokyo, estimated that Sony had sold at least six million PS5s through the end of 2020 and that Microsoft had sold three million of the Xbox Series X and the smaller Series S.

“In a lot of ways, they don’t want to satisfy demand initially. They want to have an ongoing gap between supply and demand,” Mr. Gibson said. “They want to have buzz and excitement around it for a longer period of time.”

Scarcity is typical for new consoles, but the coronavirus pandemic exacerbated it by closing factories in China early last year. Then the demand for laptops and other electronics for remote work led to a shortage of chips and other computer parts. Malfunctioning chips played a role in the supply problems as well.

Sony declined to comment, instead referring to a November post on Twitter in which the company mentioned the high demand. Microsoft said in a statement that it saw huge demand, too, and was “working tirelessly with our manufacturing and retail partners to replenish Xbox hardware as quickly as possible.”

Mike Spencer, Microsoft’s head of investor relations, said in an interview this week that the company had topped $5 billion in gaming revenue in a quarter for the first time. Microsoft sold every Xbox unit it had last quarter, he said, adding that supply is likely to be constrained at least through June.

U.S. consumers spent $7.7 billion on video games in December, according to the NPD Group, up 25 percent from a year earlier. Hardware sales accounted for $1.35 billion, the most for a December since 2013, the last time new-generation consoles were released. (Nintendo’s Switch, which first went on sale in 2017, outsold both the PlayStation and Xbox last month.)

When Mr. Vernon, 42, recounted his console-hunting tale on his radio show, a listener with an extra PlayStation reached out to him. Mr. Vernon drove to the man’s house, bought the console and surprised William with it days later.

“It was the hardest gift for anyone that I’ve ever tried to buy,” Mr. Vernon told The New York Times. “It ended up all being worth it for that moment.”

One of the most vexing issues are the scalpers. Some are using so-called purchase bots — also known as “Grinch bots” — to snap up online offers faster than humans can.

“None of these devices are reaching their customers,” Mr. Guha said. “They are just going missing somewhere in between.”

Online scalper groups are claiming credit for buying thousands of consoles, though their numbers may be exaggerated. Walmart said in a blog post in December that it had blocked more than 20 million bot attempts to buy PS5s in one 30-minute stretch in November.

Resellers list consoles on places like eBay and Facebook Marketplace for up to $1,000, double the retail price. Mr. Guha said he had seen a PS5 advertised for $5,000.

Crep Chief Notify, a British reseller company that scalpers use, said it had more than 5,000 customers. The group charges $40 a month for a suite of tools, advice on how to resell items and access to a server on Discord, a messaging app.

Max Heywood, a 19-year-old British student who is one of the company directors, said Crep Chief Notify did not use purchase bots but supplied software that monitors online stores and notifies users when new items are in stock.

Bradley Gee, another Crep Chief director, pushed back against criticism that the company helps people resell the consoles at higher prices.

“To be totally honest, it’s basic supply and demand,” Mr. Gee, 21, said. “There’s millions of consoles available. If you didn’t get one, it is unfortunate.”

He added: “We just help members secure them. They can then do what they wish with the console.”

To beat out scalpers, buyers are following Twitter accounts that announce when stores like Target, Walmart and Best Buy get new shipments. And a group of college students has seen huge interest in a free browser extension they created to notify people when digital stores restock.

More than 100,000 people have installed OctoShop, a Google Chrome extension made by five students from schools in Texas and Pennsylvania. Rithwik Pattikonda, a computer science major at the University of Texas, said the idea for a shopping aide had come about during the toilet paper shortage at the beginning of the pandemic. It morphed into a tool for outsmarting scalpers chasing consoles.

“The goal is to give the power to regular people,” Mr. Pattikonda, 20, said. He added that several thousand people have said OctoShop has helped them obtain a console.

For many, though, the search has remained fruitless.

Shannon-Leigh Bull of Warwickshire, England, has been trying to surprise her boyfriend with a new PlayStation since November.

“Sometimes, you’re waiting more than an hour and you finally get through and it’s out of stock,” Ms. Bull, 22, said. “It’s like having your dreams crushed, because you thought and hoped you’d actually get one.”

“I feel like giving up, and that I’m never going to get it.”