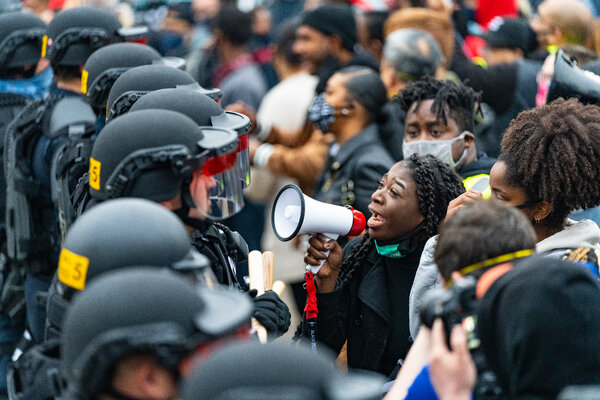 Reporters from multiple local organizations were denied entry to a news conference on Monday about the shooting of Daunte Wright, whose death at the hands of a police officer in Minnesota has set off protests.

Mr. Wright, 20-year-old Black man, was killed by the officer on Sunday during a traffic stop in Brooklyn Center, Minn., a suburb of Minneapolis. As national and international media flooded in, Brooklyn Center officials organized a news conference for Monday to address the shooting and release body-camera video.

Andy Mannix, a federal courts reporter for The Star Tribune, the largest newspaper in Minnesota, said on Twitter that he and his colleagues were denied access to the news conference while he watched national and international media be let in.

Suki Dardarian, a senior managing editor of The Star Tribune, said in an email that the paper had sent three journalists to the news conference. Two were denied entry, while one, a videojournalist, was able to get in, she said.

A spokeswoman for Minnesota Public Radio said that credentialed M.P.R. journalists also were not granted access. An article in The Star Tribune said journalists from the Minnesota Reformer, a nonprofit newsroom, were also denied.

“We were offered no explanation for why the reporter and photographer were not allowed in (as well as some other local journalists), except for someone saying the room was full,” Ms. Dardarian said. “Our videojournalist observed that there was still space in the room.”

“The chief indicated in his remarks that he is committed to transparency,” she said. “We believe that should include allowing the local media to attend a press conference to which they were invited — and agreeing to answer our questions following his statement.”

Dan Shelley, the executive director of Radio Television Digital News Association, a national industry group, said local journalists should be included in news conferences because they are part of the communities on which they’re reporting.

“If you have a genuine desire to be transparent, why would you exclude local journalists from a news conference?” Mr. Shelley said.

The city of Brooklyn Center and the city’s police department did not respond to requests for comment.