The giants aren’t the only ones. A subset of software, streaming, security and e-commerce firms are also posting eye-popping gains. 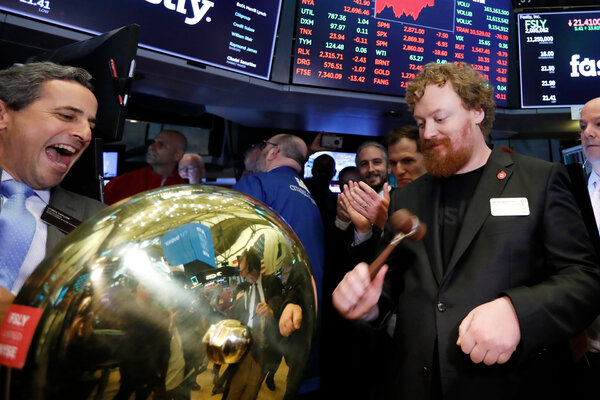 Fastly is up more than 310 percent this year. Zscaler is up over 180 percent. Chegg and Veeva are up 75 percent and 90 percent. In a tech universe dominated by Apple, Amazon, Microsoft and Google, the share prices of little companies you’ve probably never heard of are soaring.

The coronavirus pandemic has accelerated trends that were building for years by forcing large swaths of the population to work from home and shop online. And many obscure companies are taking off, driven by investors who expect them to flourish in an economy whose future arrived ahead of schedule.

“When it comes to remote work in particular, the past 10 weeks have seen more changes than we’ve seen in the previous 20 years,” said Erik Brynjolfsson, an economist and the director of the Digital Economy Lab at Stanford University.

Surveys conducted by Mr. Brynjolfsson and economists at the Massachusetts Institute of Technology found that the share of Americans working from home jumped to about 50 percent this year, from around 15 percent before the pandemic.

“We haven’t seen anything like it since World War II,” Mr. Brynjolfsson said of the broad work-force upheaval.

The tech-heavy Nasdaq composite index is up roughly 60 percent since it bottomed out in late March, and much of those gains can be attributed to the shares of the tech behemoths. Investors have bet heavily that those companies’ dominant market positions will only improve in the pandemic and its aftermath.

But the trajectory of smaller technology stocks has been even more remarkable. Zoom — the suddenly ubiquitous video conferencing service — has been an investor darling, up close to 500 percent this year as workplaces shut down. Peloton, the home video cycling company, is up almost 200 percent amid widespread gym closures — and just added to its product line.

“What we’ve seen is an acceleration in the digital transformation,” said Jeff James, who manages small and midsize stock funds at Driehaus Capital Management. Last year, Mr. James bought shares of DocuSign, which provides digital signature software to companies ranging from BMW to Visa, betting on a company whose revenues had grown more than 30 percent annually. But with in-person meetings wiped out, DocuSign is in demand: Its revenues, in its most recent quarter, grew at a 45 percent annual pace. The company’s shares are up 166 percent this year. 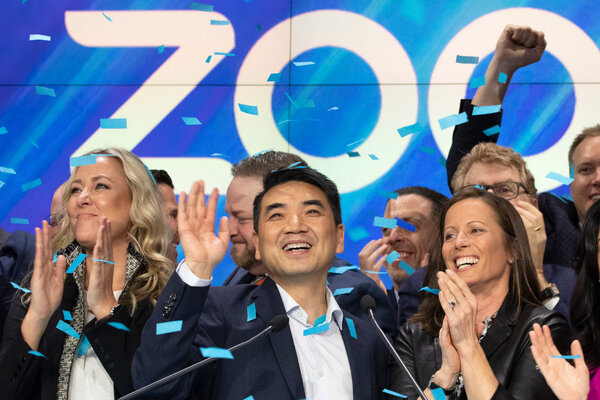 Traditional retailers are scrambling to compete, and tech is there to capitalize, too: The number of stores served by Shopify, which helps them develop e-commerce operations, jumped 71 percent in the second quarter from the first three months of the year. Its shares are up more than 120 percent.

“We’ve seen the Covid-19 pandemic fundamentally shift the way businesses and consumers interact,” Harley Finkelstein, Shopify’s chief operating officer, told analysts after the company’s most recent earnings report. “It has catalyzed e-commerce, introducing major changes in buyer behavior and pulling forward what retail would look like in 2030 to 2020.”

The tech sector has a rich history of sizzling stock surges built on little more than optimistic outlooks; the bubble of the 1990s was replete with high-profile stock flops with little or no revenue, such as Webvan and Pets.com. But while those businesses rose on near euphoria about a digital economy that was still decades away, the success of similar businesses today — consider Instacart and Chewy.com — is grounded on the solid performance even in a deep economic downturn.

“The market, I think, is seeing them now going through the worst recession in history, and the worst pandemic in 100 years, and for those business models to come out stronger was something that a lot of market participants really took note of,” said Kyle Weaver, who manages growth-stock portfolios at Fidelity.

Part of that reflects the fact that these firms are simply taking market share in the downturn.

Normally, during a deep economic downturn, discretionary spending on home furnishings would collapse, Mr. Weaver said. But the online retailer Wayfair’s sales surged more than 80 percent in the second quarter as locked-down shoppers spruced up their surroundings. It posted its first profit as a public company.

Wayfair’s shares, which Mr. Weaver’s mutual fund owns according to its most recent public filings, have risen nearly 200 percent this year.

Alan Tu, who runs T. Rowe Price’s Global Technology Fund, owns a number of the smaller tech stocks that have surged this year, including Shopify and the cloud software and security companies Twilio and Datadog. (Both of those have doubled this year.)

Mr. Tu said he expected smaller tech companies not to lose the ground they had gained, even if their sales and shares didn’t surge the same way next year, because consumers and companies had gained new habits.

And now that they are using the products — whether DocuSign on an application to refinance a mortgage or Carvana to buy a car — they may find that they prefer them, he said. At the same time, the tech companies benefit from the increased business: Operational efficiencies take hold, and they can refine their products.

“Their services are getting better because of the increased demand, and so there’s sort of this flywheel effect where you have both demand and supply moving in the same direction,” Mr. Tu said. “It’s unlikely that we’re going to go back to the world that we lived in.”