When Jaqui Lividini saw the house, she was instantly smitten: A cottage built in 1901, it was one of just three on the peninsula of Haycock Point on Long Island Sound in Connecticut, just east of New Haven. “There’s not a window that doesn’t see water, and you feel like you’re looking into the ocean,” she said. “I’m a double water sign, and it makes me happy — not being in the water, but looking at it.”

Ms. Lividini, who works in fashion communications, paid seven figures for the 1,700-square-foot, five-bedroom home to the family who originally built it. She excitedly planned a long program of renovations, which would preserve original details like bead-board paneling, while also adapting the property for today — reducing the bedroom count to three, larger spaces, for example.

She closed on the home in summer 2007, and construction was still underway when Hurricane Irene made landfall nearby almost exactly four years later. The house survived, unlike many others, but it took about a year to settle with insurers.

Construction was about to begin afresh when another hurricane hit — this time Sandy.

“The first hurricane tore off the porch and the shed, and the second one flooded the house,” Ms. Lividini recalled. The change in zoning enacted by the Federal Emergency Management Agency after the second storm required that she cease renovations and instead first raise the house, adding a lower story with breakaway walls better primed to withstand another storm.

Ms. Lividini, who lives in the house with her partner, the actor and writer John Speredakos, and their daughter, Calliope, estimated that work alone cost a quarter of a million dollars, doubling the overall renovation budget. Almost a decade later, though, such drama is a distant memory. “During the pandemic, being up here saved my life,” she said. “Looking at that water every day was a lifesaver.” 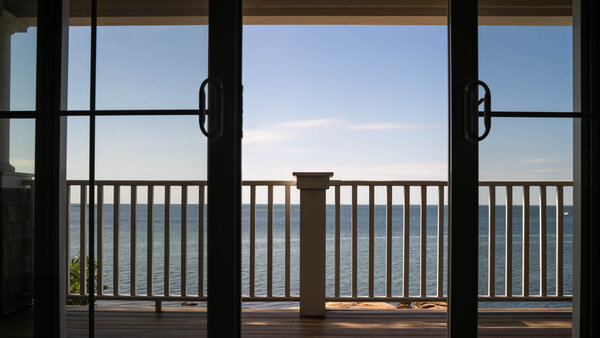 She still cherishes living by the water, despite the expense and exhaustion — and she isn’t alone. There’s a hypnotic, irresistible allure to waterfront life, which persists even as climate change is a reminder of how threatening the ocean can be. Forty percent of the world’s population, about 2.4 billion people, live within 60 miles of a coast, according to data from the United Nations. Ten percent of the world — 600 million people — live at elevations of 10 meters (around 32 feet) or less.

In the United States, many of them, like Ms. Lividini, do so by choice. But elsewhere the coastal population often skews toward the developing world: More than 50 percent of people in Vietnam, for example, have homes in low-lying coastal areas, according to World Ocean Review.

Wallace J. Nichols has spent two decades studying the allure of the ocean even as it threatens us; he details his findings in the book “Blue Mind.” Mr. Nichols said that surrounding ourselves with water in any form, whether lake, ocean or even snow, can propel humans into a state of so-called “soft fascination,” a low-intensity stimulus that holds attention, rapt, while requiring little of the body’s resources. It’s provides a feeling of restorative equilibrium he called the “blue mind.”

“In that state, we get a lot of our bandwidth back,” Mr. Nichols said. “Creativity seems to be boosted, and relaxation increases.” Even those who consider mindfulness faddish can experience its beneficial effects when close to water, he continued. “There’s something called a mammalian dive reflex, which means that when water touches our faces — even just a splash — our breathing rate slows in preparation for a dive.”

Mr. Nichols said he had been consulted about coastal developments and how best to incorporate “blue mind” benefits — most recently in November by the firm behind the new Delta Coves project near Sacramento. Only the first row of homes will provide such solace to its residents, he told developers, but there’s no imperative to site them inches or feet away from the coast; behind a few sand dunes will be fine — and safer as the climate reshapes the coast.

“We’ve mistreated our waterways in some places in quite horrible ways, but still there’s a pull -— we think ‘I know it’s bad, but I want to [be] here’,” he said.

The benefits of that impulse are likely to outweigh the risks, according to Ben Wheeler, who is a senior lecturer at Exeter University in Britain and co-author of a 2015 paper exploring the idea of the “blue gym.”

It describes how life on the waterfront contributes to overall wellness. Mr. Wheeler and his colleagues pored over census data in Britain, which included answers about health from 48 million people. It showed that those who lived near the coast reported greater well-being. More intriguingly, though, when adjustments are made for demographics, that still holds true — and coastal residents in Britain skew older, with a large proportion of those lower on the socioeconomic ladder.

“The relationship was strongest among the most deprived,” he said. The improvement in health wasn’t related to aerobic activity, either. “Most people going to coastal environments are just walking, sitting on a bench, or playing with kids on the beach. It’s the quiet fascination that doesn’t take any effort, but takes you away from the daily stress, when you contemplate the waves.”

For lower income households on the waterfront in the United States, however, new financial considerations could threaten such contemplation.

“Insurance premiums for living on the water continue to rise,” said David Clausen of Coastal Insurance Solutions, adding that the debts incurred from storms like Irene and Sandy have weakened the National Flood Insurance Program’s finances. The program aims to reduce exposure to flood-related damage, whether enabling homeowners in flood-prone areas to buy insurance administered by the government or helping to restrict additional development in those areas.

“The rates on certain properties have been subsidized by the federal government, and if you don’t raise your home, but live in a very high hazard zone with multiple losses, the premiums can be outrageous — up to $25,000 per year,” he said. “Some of the most beautiful areas happen to be at risk of catastrophe, and the premium is impacted by that.”

The author Paul Theroux has written several books that touch on the compulsion to be close to water, including his latest novel, “Under the Wave at Waimea,” centering on an aging big wave surfer. Mr. Theroux lives in two places — Hawaii and Cape Cod in Massachusetts, both close to the water.

“Houses fronting the beach, next to the beach, built on sand are a newer innovation, and a hubristic one — in time they’ll wash away,” he said. “Still, I can’t imagine any circumstance that would induce me to live anywhere except near the ocean.”

Ms. Lividini’s house has been raised, much as Mr. Clausen recommended, which stabilizes its foundations and their finances longer term.

“Even though we went through two hurricanes, it was totally worth it,” she said. “It’s like childbirth — it’s really painful, but afterward it’s the best thing you ever did. One day in that house and you forget the pain.”

And yet, Ms. Lividini has just accepted an offer to sell the cottage.

“Oh, I’m not selling because I don’t love being on the water,” she said. “The issue is I want a warmer climate, so I’m looking for something on the water down south.