It started in 2012 with a group of protesters outside a McDonald’s demanding a $15 minimum wage — an idea that even many liberal lawmakers considered outlandish. In the years since, their fight has gained traction across the country, including in conservative states with low union membership and generally weak labor laws.

On Friday, 20 states and 32 cities and counties will raise their minimum wage. In 27 of these places, the pay floor will reach or exceed $15 an hour, according to a report released on Thursday by the National Employment Law Project, which supports minimum-wage increases.

The movement’s strength — a ballot measure to increase the minimum wage in Florida to $15 by 2026 was passed in November — could put renewed pressure on Congress to increase the federal minimum wage from $7.25 per hour, where it has been since 2009. President-elect Joseph R. Biden Jr. has endorsed $15 an hour at the federal level and other changes sought by labor groups, like ending the practice of a lower minimum wage for workers like restaurant workers who receive tips.

But even without congressional action, labor activists said they would keep pushing their campaign at the state and local levels. By 2026, 42 percent of Americans will work in a location with a minimum wage of at least $15 an hour, according to an Economic Policy Institute estimate cited in the NELP report.

“These wages going up in a record number of states is the result of years of advocacy by workers and years of marching on the streets and organizing their fellow workers and their communities,” said Yannet Lathrop, a researcher and policy analyst for the group.

The wage rates are increasing as workers struggle amid a recession caused by the coronavirus pandemic that has left millions unemployed.

“The Covid crisis has really exacerbated inequalities across society,” said Greg Daco, chief U.S. economist for Oxford Economics. “This has given more strength to these movements that try to ensure that everyone benefits from a strong labor market in the form a sustainable salary.”

Workers during the pandemic have been subject to furloughs, pay cuts and decreased hours. Low-wage service workers have not had the option of working from home, and the customer-facing nature of their jobs puts them at greater risk for contracting the virus. Many retailers gave workers raises — or “hero pay” — at the beginning of the pandemic, only to quietly end the practice in the summer, even as the virus continued to surge in many states.

“The coronavirus pandemic has pushed a lot of working families into deep poverty,” said Anthony Advincula, director of communications for Restaurant Opportunities Centers United, a nonprofit focused on improving wages and working conditions. “So this minimum wage increase will be a huge welcome boost for low-wage workers, especially in the restaurant industry.”

Mary Kay Henry, international president of the Service Employees International Union, said the labor movement would make getting even more workers to $15 an hour or more a priority in 2021.

“There’s millions more workers who need to have more money in their pockets,” she said, adding that the election of Mr. Biden and Vice President-elect Kamala Harris would bolster the effort. “We have an incredible opportunity.”

Because many hourly service workers are Black, Hispanic, Native American and Asian, people of color stand to gain the most from minimum-wage increases. A 2018 study from the Economic Policy Institute found that workers of color are far more likely to be paid poverty-level wages than white workers.

Some economists say lifting the minimum wage will benefit the economy and could be an important part of the recovery from the pandemic recession. That is partly because lower-income workers typically spend most of the money they earn, and that spending primarily takes place where they live and work.

Kate Bahn, director of labor market policy at the Washington Center for Equitable Growth, said that after the 2007-9 recession, growth was anemic for years as pay stagnated and the job market slowly clawed its way back. 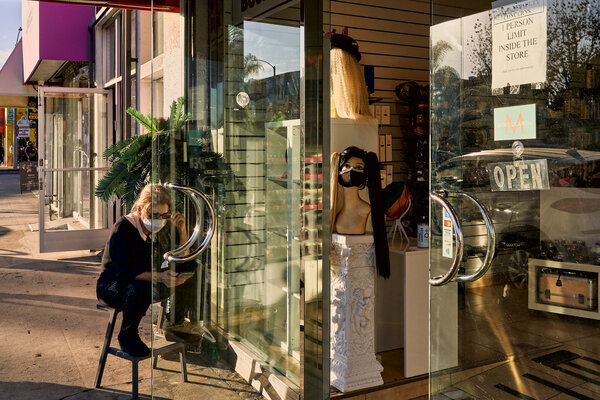 “There’s been a broader acknowledgment that the lackluster wage growth we’ve seen in the past 30 years and since the Great Recession reflects structural imbalances in the economy, and structural inequality,” Ms. Bahn said.

Many business groups counter that increasing the minimum wage will hurt small businesses, already beleaguered by the pandemic. More than 110,000 restaurants have closed permanently or for the long term during the pandemic, according to the National Restaurant Association.

Increasing the minimum wage could lead employers to lay off some workers in order to pay others more, said David Neumark, an economics professor at the University of California, Irvine.

“There’s a ton of research that says increasing minimum wages can cause some job loss,” he said. “Plenty workers are helped, but some are hurt.”

In New York, State Senate Republicans had urged Gov. Andrew M. Cuomo, a Democrat, to halt increases that went into effect on Thursday, arguing that they could amount to “the final straw” for some small businesses.

While increases to the minimum wage beyond a certain point could lead to job losses, Ms. Bahn of the Washington Center for Equitable Growth argued that “we are nowhere near that point.”

Economic research has found that recent minimum-wage increases have not had caused huge job losses. In a 2019 study, researchers at the Federal Reserve Bank of New York found that wages had increased sharply for leisure and hospitality workers in New York counties bordering Pennsylvania, which had a lower minimum, while employment growth continued. In many cases, higher minimum wages are rolled out over several years to give businesses time to adapt.

Regardless of whether there is federal action, more state ballot initiatives will seek to raise the minimum wage, said Arindrajit Dube, an economics professor at the University of Massachusetts Amherst.

“At a basic level, people think that this is an issue of fairness,” Mr. Dube said. “There’s broad-based support for the idea that people who are working should get a living wage.”