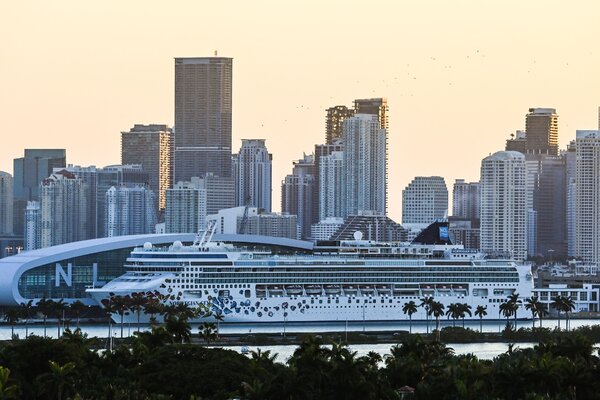 The fight over requiring vaccinations for travel is heating up.

Norwegian Cruise Line Holdings sued Florida’s surgeon general on Tuesday, accusing the state of preventing it from “safely and soundly” resuming trips by barring it from requiring customers to be vaccinated against the coronavirus.

The filing represents the latest twist in a monthslong fight over the resumption of cruises from Florida, a hub for the industry. Under Gov. Ron DeSantis, the state has fought vaccine requirements by cruises and other businesses, claiming that such policies are discriminatory. Supporters of vaccine requirements have argued that requiring vaccines is necessary to protect public health.

Under a state law approved in May, businesses that force customers to provide proof of vaccination could face fines of up to $5,000 per violation. In its lawsuit, filed in the U.S. District Court for the Southern District of Florida, Norwegian said it was forced to sue Scott Rivkees, the state’s surgeon general, “as a last resort.”

“One anomalous, misguided intrusion threatens to spoil N.C.L.H.’s careful planning and force it to cancel or hobble upcoming cruises, thereby imperiling and impairing passengers’ experiences and inflicting irreparable harm of vast dimensions,” the company said in the lawsuit.

Norwegian is claiming that Florida’s ban is not valid because it pre-empts federal law and violates various provisions of the Constitution, including the First Amendment. Neither Norwegian nor the Florida Department of Health immediately responded to requests for comment.

After banning cruises nearly a year and a half ago, the Centers for Disease Control and Prevention said in the fall that it would allow cruises to set sail again. The agency later developed a set of stringent conditions that cruise lines are required to follow.

Florida sued the C.D.C., arguing that the health agency had overstepped its authority in setting those standards. In June, a federal judge temporarily blocked the agency from enforcing the rules in the state while the case proceeds. Later that month, Celebrity Cruises, a subsidiary of Royal Caribbean Group, began the first major cruise from a U.S. port since the pandemic began, sailing from Fort Lauderdale, Fla. Norwegian hopes to restart cruises from Miami on Aug. 15.

The industry was devastated by the pandemic, with ridership falling 80 percent last year compared with 2019. The three major cruise companies — Carnival Corp., Royal Caribbean and Norwegian — have lost a combined $900 million each month since March 2020, according to a recent report by Moody’s, the credit rating firm.