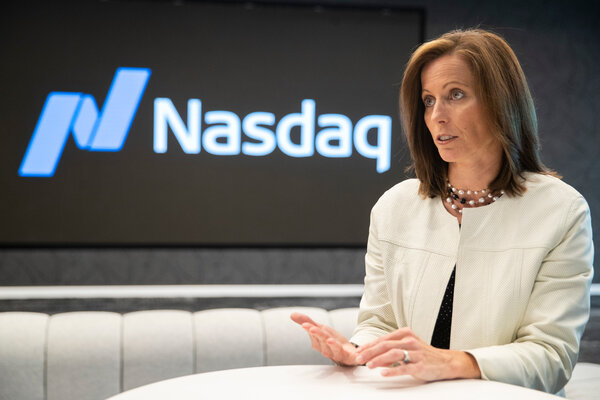 Nasdaq will ask the S.E.C. this morning for permission to adopt a new requirement for the 3,249 companies listed on its main U.S. stock exchange: have at least one woman and one “diverse” director and report data on their board’s diversity — or face consequences.

Nasdaq will require boards to have at least one woman and one director who self-identifies as an underrepresented minority or L.G.B.T.Q. (Those categories are not, of course, mutually exclusive.) To give companies time to comply, they will need to publicly disclose their board diversity data within a year of S.E.C. approval, and have at least one woman or diverse director within two years. Bigger companies will be expected to have one of each type of director within four years.

Companies that don’t disclose diversity information face potential delisting, while those that report their data but don’t meet the standards will have to publicly explain why. Over the past six months, Nasdaq found that more than 75 percent of its listed companies did not meet its proposed diversity requirements.

Nasdaq lobbied the S.E.C. to make diversity disclosure a rule for all companies. “The ideal outcome would be for the S.E.C. to take a role here,” Adena Friedman, Nasdaq’s C.E.O., told DealBook. “They could actually apply it to public and private companies because they oversee the private equity industry as well.”

It would be the first time a major stock exchange demanded more disclosure than the law requires, which Ms. Friedman described as “an unusual step.” It raises questions about whether exchanges could use their listing rules to force action on other hot-button issues, like climate change.

The move isn’t taking place in a vacuum. Goldman Sachs announced that it would require companies it helps take public to have at least one diverse board member. A new California law imposes a minimum number of minority directors on companies headquartered in the state. And institutional investors are pushing for more diversity under the E.S.G. banner.

Nasdaq cites research showing the benefits of board diversity, from higher-quality financial disclosures to the lower likelihood of audit problems. “Diversity of the board is an important element of giving investors confidence in the future sustainability of the company,” Ms. Friedman said. “It’s not like we’re saying this is an optimal composition of a board, but it’s a minimum level of diversity that we think every board should have.”

What happens next: After Nasdaq files its request, the S.E.C. will solicit public comments. That typically lasts several weeks, and then the commission will decide how to proceed.

A November to remember for stocks. The S&P 500 gained nearly 11 percent in November, its fourth-best month in 30 years, amid progress on coronavirus vaccines and clarity on the U.S. presidential election. (U.S. stock futures are also up today.) Speaking of gains, shares in Moderna more than doubled yesterday after the company sought emergency F.D.A. authorization for its Covid-19 vaccine.

U.S. officials are split on the risks facing the American economy. In testimony before the Senate today, Treasury Secretary Steven Mnuchin is expected to call state and local lockdowns threats to economic growth, while the Fed chairman, Jay Powell, will cite rising coronavirus infection rates as the biggest challenge to the U.S. economy.

G.M. scales back its partnership with the electric vehicle maker Nikola. G.M. said that it wouldn’t make an electric pickup for the start-up or take an equity stake, though it planned to supply hydrogen fuel cells. Shares in Nikola, which has been accused of exaggerating its capabilities, fell 27 percent.

Exxon Mobil takes a huge write down. The oil giant said it would write off up to $20 billion in investments in natural gas and drastically cut spending on exploration and production.

Credit Suisse names a new chairman and discloses a big fine. The Swiss bank has hired António Horta-Osório, the outgoing C.E.O. of the British lender Lloyds, as its chairman — and said it faced a $680 million penalty in the U.S. over residential mortgage-backed securities. Separately, UniCredit’s C.E.O., Jean Pierre Mustier, plans to step down in April after the Italian lender’s board rejected his strategic plan.

S&P Global said yesterday that it planned to acquire IHS Markit for $44 billion, including debt, the biggest deal announced this year. It highlights how data has become the most valuable commodity for business: the new oil, as they say. Harnessing data is at the center of a rush of consolidation, including Deutsche Börse buying a big stake in ISS, Nasdaq acquiring Verafin, ICE taking over Ellie Mae and the London Stock Exchange absorbing Refinitiv.

An “Aladdin’s cave” of data and insights. Doug Peterson, S&P’s chief executive, told DealBook that the deal was about “providing analytics and data and research and ratings that our customers can use to make decisions.” The combination of S&P’s A.I. financial analysis unit, Kensho, with the IHS data platform, Data Lake, would make it easier for customers to sift through vast data troves, he said. Lance Uggla, the C.E.O. of IHS Markit, told analysts the combination of the companies created an “Aladdin’s cave” — “it’s filled with opportunity,” he said.

The LSE-Refinitiv deal, which was announced last year, is still held up in antitrust review, a potential warning for S&P and IHS. Mr. Peterson said yesterday he was “very well advised” and didn’t think “there are any regulatory issues that can’t be resolved.”

More deals are expected. As firms race to acquire data, and the means to analyze it, bankers see more consolidation. Deals are likely to come from established data providers like Bloomberg, Moody’s, MSCI, FactSet and Verisk; exchanges that are pushing into the data industry like CME, ICE, LSE, Deutsche Börse and Nasdaq; and fintech challengers breaking into the business. Competition will be fierce: Bloomberg commands around a third of the data and analytics market and has a lot of financial firepower. The frenzy of speculation about Mike Bloomberg divesting the business he founded when he ran for president — some said it could have fetched as much as $60 billion — is another sign of how hot this market has become.

“We face great challenges as a country right now. To recover, we must restore the American dream — a society where each person can rise to their potential and dream even bigger for their children.”

— Janet Yellen, the former Fed chair and nominee for the next Treasury secretary, in her first tweet.

Bitcoin is back. Again.

The price of Bitcoin set a new high in trading yesterday, at just over $19,850, three years after its previous peak. This time, the cryptocurrency’s rise is being fueled by more than pure retail speculation, with institutional investors and companies “treating Bitcoin as an alternative asset, somewhat like gold,” The Times’s Nathaniel Popper writes.

Steven Davidoff Solomon, a.k.a. the Deal Professor, is a professor at the U.C. Berkeley School of Law and the faculty co-director at the Berkeley Center for Law, Business and the Economy.

Now that President-elect Joe Biden has picked his economic team, next up are the financial regulators. While there will be a focus on tighter regulation of the big banks, the most significant changes will be centered on consumers and diversity. Think of it as “Obama plus.”

Here are the changes I expect:

Investment brokers: The S.E.C. will most likely increase scrutiny of the industry, with a heightened emphasis on protecting investors. Regulators could revisit tightening rules on brokers’ fiduciary duty to clients and their ability to offer other services, like insurance. This push would coincide with potentially significant changes at the Consumer Financial Protection Bureau, restoring Senator Elizabeth Warren’s vision of the agency as a tough regulator.

Sustainability and diversity: Regulators could impose more disclosure requirements, forcing companies to explicitly define their purpose and how they achieve it. (Nasdaq is ahead of the game here — see above.)

Stock indexes and exchange-traded funds: How are these crucial benchmarks and investment vehicles assembled? Tesla’s addition to the S&P 500, despite concerns about its operational and financial health, shows that index providers are now effectively investment advisers.

Banking enforcement: While there’s talk of stricter scrutiny and bigger penalties, regulators were already heading in that direction. (One recent example: a $2.9 billion fine for Goldman Sachs over the 1MDB scandal.) Expect this to continue, but remember that banks are better run and more compliance-oriented than ever, even if they’re still imperfectly managed.

Corporate governance: Proposals could include efforts to limit the use of dual-class shares and give workers representation on corporate boards. This area is the least likely to see major changes, because Democrats may have no more than a slim majority in the Senate (if that).

Over all, without a Senate majority that can drive wholesale changes, financial regulation under Mr. Biden will largely stick to enhancing capital formation and protecting investors in a manner similar to the Obama era, but with more focus on the consumer. That’s the “plus.”

Facebook agreed to buy Kustomer, a customer relationship management company, even as it faces antitrust scrutiny over its history of acquiring start-ups that may become rivals. (NYT)

The retail group Arcadia, which owns Topshop, filed for bankruptcy protection. It is one of the biggest retail collapses in Britain since the onset of the pandemic. (NYT)

Ajit Pai, whose tenure as F.C.C. chairman focused on sweeping deregulation of the telecom industry, will step down on Inauguration Day. (NYT)

President Trump has raised $170 million since Election Day, with most of the funds going toward a new political action committee rather than his challenge of voting results. (NYT)

A coalition of 32 advocacy groups urged President-elect Joe Biden to exclude Big Tech executives and lobbyists from jobs in his administration. (Reuters)

DeepMind, the British A.I. lab owned by Alphabet, reported a breakthrough in computing that solves a decades-old biological problem — and could lead to advances in drug discovery. (NYT)

The death of Tony Hsieh, the influential former C.E.O. of Zappos, was ruled an accident by Connecticut’s medical examiner. (Bloomberg)

Unilever is testing out a four-day workweek (at full pay) for its employees in New Zealand. (NZ Herald)

How the pandemic is threatening to upend the corporate franchise model. (WSJ)