WASHINGTON (Reuters) – Millions more Americans filed claims for unemployment benefits last week, suggesting that layoffs were spreading to industries that were not initially directly impacted by business closures and disruptions related to the coronavirus.

Other data on Thursday showed a record collapse in consumer spending in March as the economy reels from nationwide lockdowns to slow the spread of COVID-19, the respiratory illness caused by the virus. The reports came on the heels of news on Wednesday that the economy suffered its sharpest contraction since the Great Recession in the first quarter, ending the longest expansion in the United States’ history.

“The economy continues to print numbers that scare the living daylights out of everyone in the world,” said Chris Rupkey, chief economist at MUFG in New York.

Initial claims for state unemployment benefits totaled a seasonally adjusted 3.839 million for the week ended April 25, the Labor Department said. While that was down from 4.442 million in the prior week and marked the fourth straight weekly decline in applications, the numbers are still at levels unimaginable just months ago. Economists polled by Reuters had expected 3.50 million claims in the latest week.

Applications for jobless benefits hit a record 6.867 million in the week ended March 28. Last week’s filings lifted the number of people who sought unemployment benefits to 30.307 million since March 21, roughly 18.6% of the working age population.

U.S. stocks were trading lower on the claims report. The dollar was little changed against a basket of currencies, while U.S. Treasury prices rose.

The claims report also showed the number of people receiving benefits after an initial week of aid surged 2.174 million to 17.992 million in the week ended April 18. The so-called continuing claims data is reported with a one-week lag and will be closely watched in the coming months to get a better sense of the depth of the labor market downturn.

The continuing claims data covered the period during which the government surveyed households for April’s unemployment rate. At face value, the ballooning joblessness rolls imply a jump in the unemployment rate to above 15% in April.

Economists, however, say this is unlikely due to the nature of job losses during the lockdowns. The government has allowed people temporarily unemployed for reasons related to COVID-19 to file for jobless benefits.

This includes those quarantined with the expectation of returning to work, as well as people leaving employment due to a risk of exposure or infection or to care for a family member.

However, according to the Labor Department’s Bureau of Labor Statistics, which compiles the closely watched monthly employment report, a person is defined as unemployed if they do not have a job and have actively looked for work in the past four weeks, and currently are available for work.

“Someone who lost their job but is not actively seeking work because the virus makes job search impossible will not be counted as unemployed,” said Heidi Shierholz, a former chief economist at the Labor Department.

“A person who lost their job because they have to care for a child whose school or day care closed would not be counted as unemployed because they are not available to work,” added Shierholz, now head of policy at the Economic Policy Institute in Washington.

These workers would be counted as dropping out of the labor force, which would lower the unemployment rate. Still, economists expect the jobless rate in April will shatter the post-World War Two record of 10.8% touched in November 1982.

In March the jobless rate shot up 0.9 percentage point, the largest monthly change since January 1975, to 4.4%. The government will publish April’s employment report next Friday.

In a separate report on Thursday, the Commerce Department said consumer spending, which accounts for more than two-thirds of U.S. economic activity, slumped by a record 7.5% last month. Consumer spending was ironically depressed by a drop in outlays on healthcare as dental offices closed and hospitals postponed elective surgeries and non-emergency visits to focus on patients suffering from COVID-19. Spending increased 0.2% in February.

Monthly inflation was subdued in March, with the personal consumption expenditures (PCE) price index excluding the volatile food and energy components dipping 0.1%. That was the weakest reading since March 2017 and followed a 0.2% gain in February. In the 12 months through March, the so-called core PCE price index increased 1.7% after rising 1.8% in February. The core PCE index is the Federal Reserve’s preferred inflation measure. It missed the U.S. central bank’s 2% target in 2019. 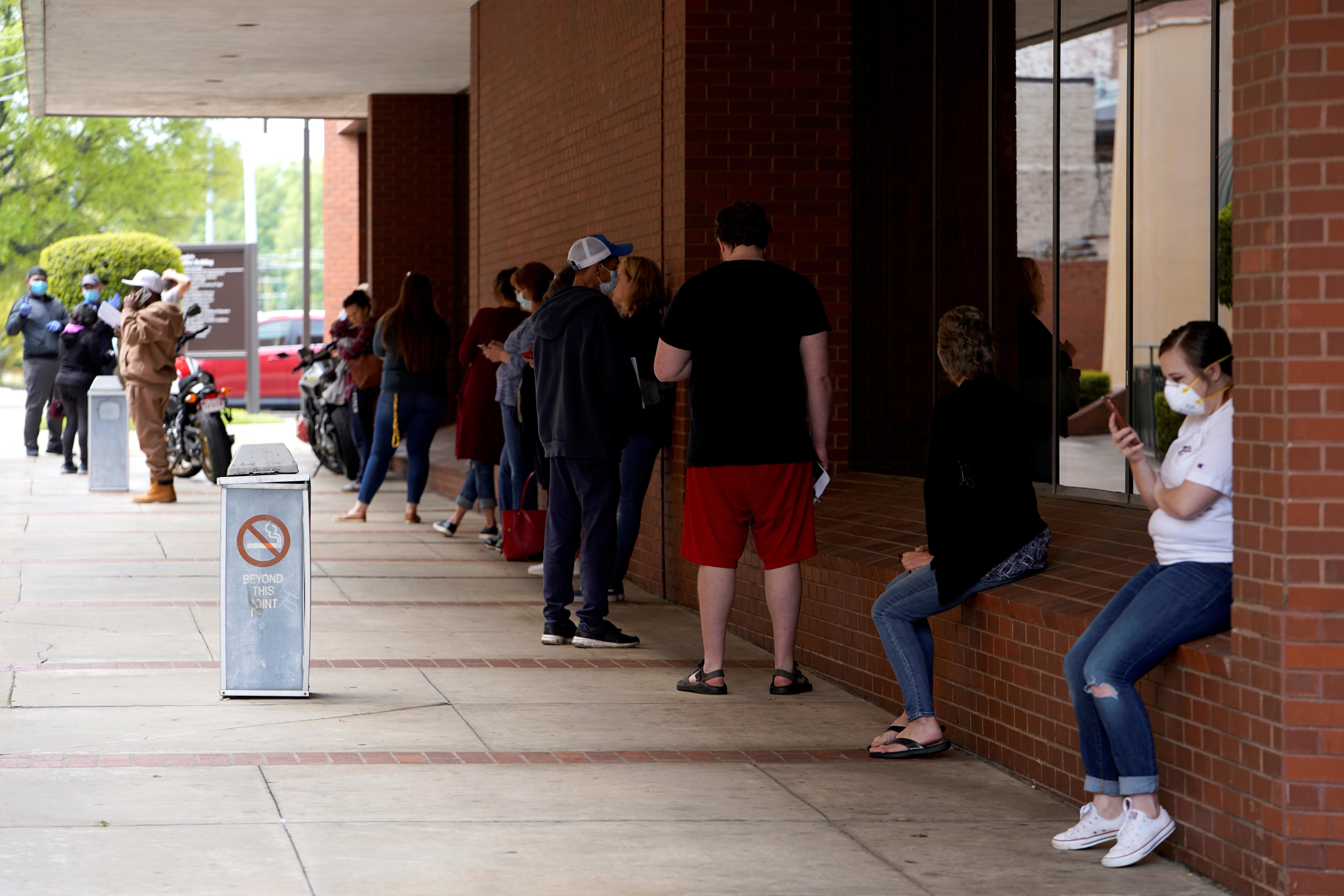 When adjusted for inflation, consumer spending plunged a record 7.3% in March, setting consumption on a sharply lower path heading into the second quarter. Economists are predicting a record collapse in consumer spending, with estimates for the decline in GDP ranging from a 20% rate to a 40% pace.

Personal income tumbled 2.0% in March, the most since January 2013, reflecting decreases in compensation.