LONDON — Long an unloved slice of central London, the bit of Knightsbridge that sits between Harvey Nichols and Harrods is reawakening under the stewardship of property company The Knightsbridge Estate, which has been working quietly on a 152 million pound project aimed at transforming the area into a flourishing community, as opposed to a touristy route on the way to Harrods.

Burberry, which will officially open the doors to a new 9,225-square-foot flagship store on Wednesday, is the anchor of what promises to be a glittering strip of luxury and fashion stores running from the north end of Sloane Street, and west onto Brompton Road. Burberry’s corner site, located at No. 1 Sloane Street, showcases a chic new concept designed by Vincenzo De Cotiis and the brand’s team. It will roll out worldwide in the next few months.

The Knightsbridge Estate is in talks to install two more luxury flagships next door to Burberry, at No. 3 and No. 5 Sloane Street. It also plans to stack the newly refurbished Brompton Road spaces with four fashion flagships, two of which have already been taken, although the estate declined to reveal the names of the new occupiers.

amfAR Cannes 2021: Inside the Gala

It has been gutting and upgrading the buildings to make them fit for deliveries, creating staff entrances and secure storage for retailers. It is also building office space, while 33 new apartments will be located on the floors above the retail stores.

The 340,000-square-foot, mixed-use redevelopment at the northern end of the estate will also include a ground floor café and deli, and two new station entrances to the Knightsbridge Underground, one at nearby Hooper’s Court (where the new office building will be located) and another on Brompton Road.

The estate has been cleaned by stone experts and given a new lighting scheme, while the sidewalks have been widened.

Unusually for prime central London, the 33 apartments are for rent, not for sale. The estate wants people to live there, rather than buy them as an investment — and then leave them vacant as has happened in many other areas of London over the last decade. The apartments will be available to rent as of fall 2022, and they will have access to a new rooftop restaurant, a terrace with panoramic views, and green spaces. 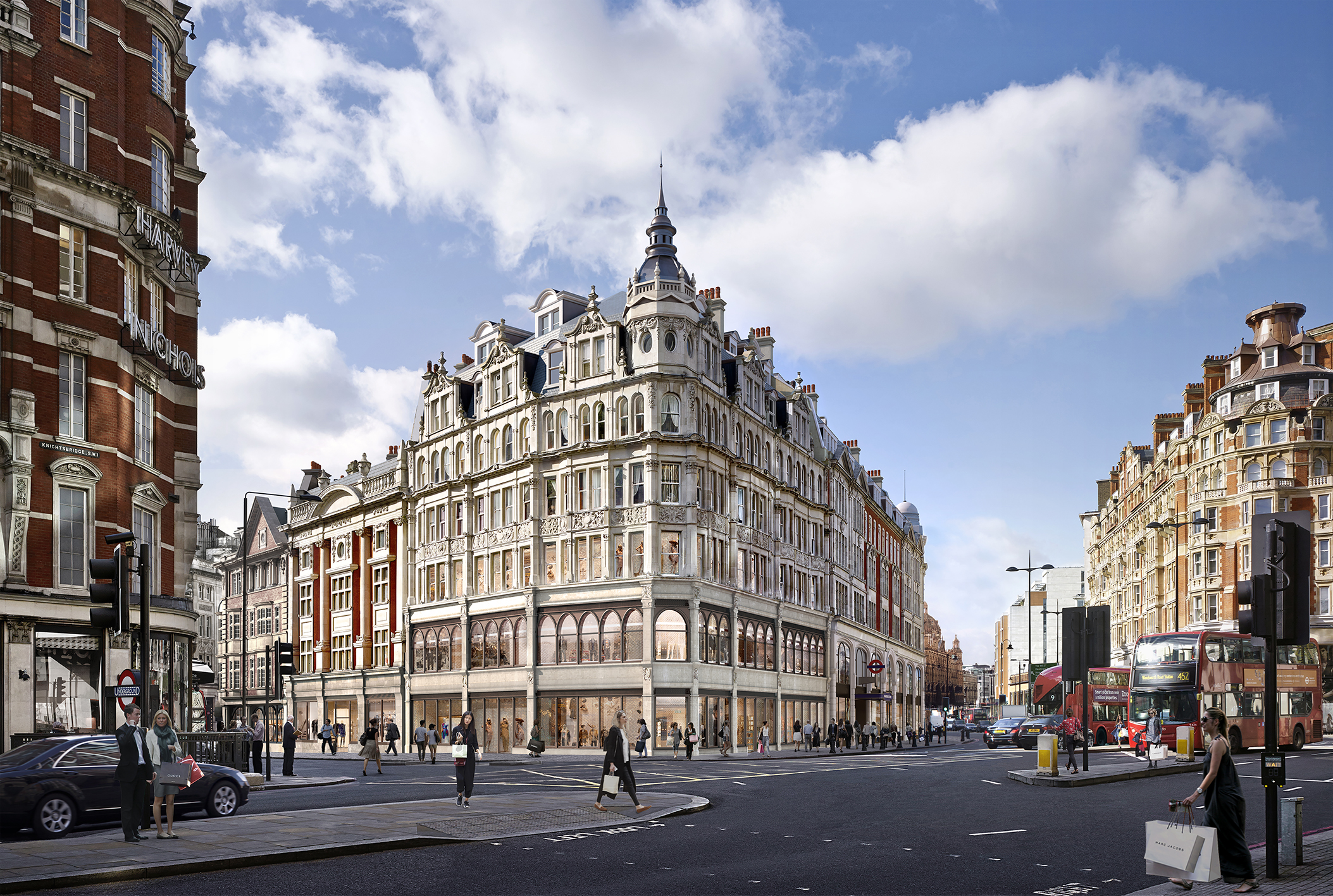 A rendering of the newly refurbished area of Knightsbridge. Burberry has since occupied the corner space. Image Courtesy of The Knightsbridge Estate

“The owners have taken a very long-term view, it’s a long-hold asset for them and there is still so much to be done,” said Sarah Waller, senior asset manager of The Knightsbridge Estate, which is owned by the multinational Olayan Group, which in turn is owned by the eponymous Saudi Arabian family.

“This has also been a chance to restore some character to the neighborhood,” said Waller, noting that the estate refurbished some of the buildings per the original architectural drawings and highlighted period features on the updated storefronts.

It also did its best to erase the cheap, plastic-y signage that had long been a hallmark of that particular — and very busy — strip of Knightsbridge.

While COVID-19 may have delayed works and prevented international business people, expats and tourists from visiting London, Waller said the project has been steaming ahead, and the mood is upbeat. “There is no denying the rest of this year is going to be tough, but we are feeling a more positive shift in the market that will hopefully solidify in 2022.”

She added that brands and retailers have already returned to planning mode and are thinking about their next steps, rather than waiting in lockdown limbo.

Waller said it was crucial the new development attract, and retain, a diverse bunch of visitors and residents. The new apartments are being built with “neutral interiors” in a bid to appeal to everyone from students to retirees.

“We collect a lot of data, and there is already a mix of nationalities coming to Knightsbridge — as well as British tourists — and it’s also a very residential area. We want to create a sense of community. We want people living, shopping and eating here,” Waller said.

A rendering of the newly refurbished north tip of Sloane Street in London. Image Courtesy of The Knightsbridge Estate

Olayan Group purchased the property in 2010 and is investing 152 million pounds in the overall Knightsbridge Estate project. The estate has already upgraded shops further down Brompton Road, on the way to Harrods, and has brought in new tenants including Watches of Switzerland, Seiko, Diesel, Furla and Pinko.

Olayan also owns 550 Madison Avenue in Manhattan, the former Sony building that was designed by Philip Johnson and John Burgee in postmodern style. The company purchased the 37-floor office building for a reported $1.3 billion.

The neighborhoods around Knightsbridge and Chelsea are certainly getting their share of investment love: As reported in 2019, the property owner, Cadogan, and the local council, Royal Borough of Kensington and Chelsea, are giving their part of Sloane Street, which runs from Knightsbridge to Sloane Square, a 40 million pound facelift.

The London architect John McAslan and Partners, whose recent work includes the transformation of King’s Cross Station, is in charge of the public realm master plan, while new planting is being overseen by the multiple Chelsea Flower Show award winner Andy Sturgeon.

In the interview, Waller said The Knightsbridge Estate has been meeting regularly with Cadogan. “We met with the architects early on, and our respective plans sit really well together,” she said.