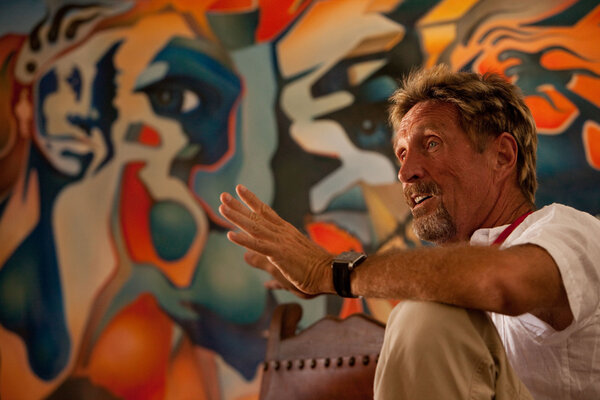 John David McAfee, the founder of the antivirus software maker bearing his name, died in a prison in Spain on Wednesday, the same day a Spanish court ruled that he could be extradited to the United States on tax-evasion charges.

His death was confirmed by his lawyer, Nishay K. Sanan. Mr. McAfee was 75.

Mr. McAfee was arrested in Spain in 2020 after prosecutors in the United States accused him of not filing tax returns from 2014 to 2018, even as he earned millions from “promoting cryptocurrencies, consulting work, speaking engagements and selling the rights to his life story for a documentary,” according to an indictment filed by the Justice Department last year.

He had resisted extradition to the United States, claiming he faced political persecution by U.S. authorities in part because he opposed the fiat money system. But on Wednesday, the Spanish court said it would allow the Justice Department’s request to extradite him.

“The social, economic or any other relevance the defense claims the appellant possesses does not grant him any immunity,” the ruling stated. The court also said that, besides verbal allegations, there was “no revealing data or indication that Mr. McAfee could be subjected to any political persecution.”

Mr. McAfee was also at the center of a media frenzy in 2012 surrounding the death in Belize of a neighbor. He fled his home there after the police called him a “person of interest.”

McAfee, the software company that he founded, was once a household name in computer security. But it rose to prominence largely without Mr. McAfee, after he resigned from the company in 1994. Intel, the computer chip maker, bought the company in 2010 for $7.7 billion, then sold its majority stake to an investment firm six years later.

Before and after its purchase by Intel, the company tried to distance itself from Mr. McAfee. In 2014, Intel changed the company’s name to Intel Security, but it never completely shook its attachment to its founder and the brand he helped create.

In 2016, when Mr. McAfee tried to use the name with a new security company, Intel filed a lawsuit seeking to prevent him from doing so. Intel and Mr. McAfee settled the lawsuit, with Mr. McAfee agreeing not to use his name in the field of cybersecurity.

This is a developing story. Check back for updates.