It is an ironclad rule of the private Facebook group of past “Jeopardy!” contestants that nobody post about that night’s episode before 11 p.m. Eastern time, to avoid spoiling the show for West Coast viewers.

So the moderators of the group waited until 11 p.m. sharp on April 27 to reassure the roughly 2,800 fellow members that they had the crisis in hand. They had seen a contestant on that night’s show, a big white guy with a red tie, Kelly Donohue, make an odd gesture with three fingers of his right hand. “Based on the evidence we’ve seen being bandied about elsewhere, there is a real possibility he was giving either a white power or a Three Percenter hand gesture,” wrote one moderator, a middle-school teacher who was on the show about five years ago, according to screenshots provided by another group member. And though “we can’t know his intent,” he continued, “we’re not here to provide safe harbor for white supremacists.”

They weren’t the only ones who noticed the gesture. About 50 viewers had tweeted about it, suggesting variously that it was a symbol of the Ku Klux Klan or of QAnon. And “Jeopardy!” contestants searching Mr. Donohue’s personal Facebook page saw what they considered other, damning evidence, including a picture of Mr. Donohue in a red MAGA hat. One leading member of the group wrote up a public letter. Another emailed the Anti-Defamation League to report the incident.

Their statement received wide coverage, particularly in Massachusetts, where Mr. Donohue works as a bank examiner for the state government and the CBS local news called it a “social media firestorm.” A headline on the fact-checking website Snopes got much less attention: “No, ‘Jeopardy!’ Champ Kelly Donohue Didn’t Make the ‘White Power’ Hand Gesture.”

Mr. Donohue’s turn over the barrel is hardly a new story. In America, everyone gets to be the main character for 15 minutes. I often hesitate to write about these stories because each is about something different: about deep injustice being brought to light, or an innocent person harassed by trolls, or a random person’s minor sin. Often, the argument is really about keeping things in proportion.

But the “Jeopardy!” story is a remarkable case study for a couple of reasons. First, the participants represent a particular kind of American achievement — the mastery of facts and trivia, celebrated by one of America’s few universally beloved institutions. A turn on “Jeopardy!” is the best credential there is in America. (When my brother, Emlen, lost valiantly in 2017, it generated more familial excitement than his Ph.D.) And I would say, after talking to a couple of dozen former contestants last week, that they are not just smart people but basically nice and sincere ones, too, from diverse backgrounds all over the country, united only by their ability to recall Madonna lyrics and capital cities.

And second, Snopes is right. Mr. Donohue’s case is unusually clear-cut, and the allegation is obviously false.

So the element of this story that interests me most is how the beating heart of nerdy, liberal fact-mastery can pump blood into wild social media conspiracy, and send all these smart people down the sort of rabbit hole that leads other groups of Americans to believe that children are being transported inside refrigerators. And, I wanted to know, how they could remain committed to that point of view in the absence of any solid evidence.

Mr. Donohue’s three fingers, Snopes pointed out, symbolize the number “three.” After his first victory, he waved one finger. After his second victory, he raised two. And after his third, he showed three fingers. He awkwardly folded his index and forefingers into something that looks as if it could be some kind of sign, but doesn’t resemble the “OK” signal that white supremacists have sought to appropriate. 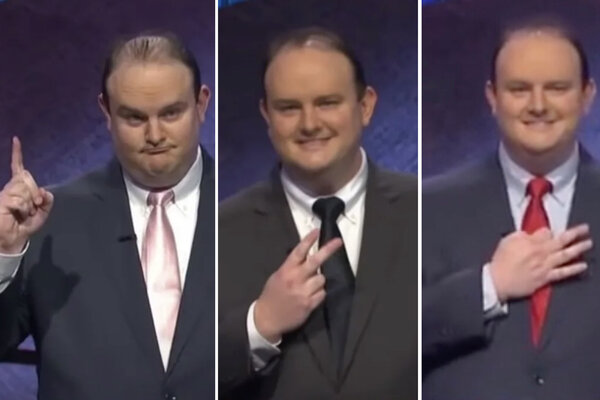 Mr. Donohue had tried to explain himself after the episode aired and accusations of covert white supremacy began turning up on his personal Facebook page. “That’s a 3. No more. No less,” he wrote. “There wasn’t a hidden agenda or any malice behind it.”

His fellow former contestants responded harshly in their letter to his attempt to explain himself. “Most problematic to us as a contestant community is the fact that Kelly has not publicly apologized for the ramifications of the gesture he made,” they wrote. That prompted him to “reject and condemn white supremacy” in a second statement.

Inside the Facebook group, the sort of argument you’ve seen in pretty much every Facebook group in America ensued. The group had already been roiled by complaints from contestants of color that they were being effectively silenced when other members “blocked” them, meaning the other members couldn’t read their posts. In January, administrators of the Facebook group changed the rules to outlaw blocking. They also made an exception to a ban on talking politics for “human rights.” The discussion of Mr. Donohue fell into that category.

Several members of the group who thought the reaction to Mr. Donohue’s hand was “unhinged,” as a 2020 contestant, Shawn Buell, told me, stayed silent. Mr. Buell said he assumed he would be shouted down. (He said he had initially considered membership in the group “an honor,” but had learned to stay silent this January after group members bitterly condemned the “Jeopardy!” icon Ken Jennings for defending a friend, immortalized on Twitter as “Bean Dad,” after the man tweeted about not letting his young daughter eat until she learned how to open a can of beans.) The letter’s signers defended their position on Mr. Donohue, and Black former contestants questioned whether white former contestants were in a position to judge what was racist.

Then, two weeks later, the group finally heard back from the Anti-Defamation League, the Jewish civil rights group that is usually quick to call out anything with the faintest smell of bigotry.

“Thank you for reaching out regarding your concern over a Jeapardy [sic] contestant flashing what you believed to be a white power hand signal,” wrote Aaron Ahlquist, of the A.D.L., according to text posted to the group by the contestant who had emailed the group. “We have reviewed the tape and it looks like he is simply holding up three fingers when they say he is a three-time champion. We do not interpret his hand signal to be indicative of any ideology. However, we are grateful to you for raising your concern, and please do not hesitate to contact us in the future should the need arise.”

The A.D.L.’s response provoked fury among former contestants who had signed the letter.

“Is anyone else feeling gaslit?” asked one two-time champion, according to the screenshots. “We saw it. We know we did. But a lot of people (including the goddamned ADL) are telling us we didn’t. That’s some classic gaslighting.”

These are, I should stress again, a bunch of nice, thoughtful people. I found them mostly on LinkedIn, where they tend to have well-curated profiles and avatars of themselves against the show’s blue backdrop. The signers of the letter I spoke to seemed convinced that Mr. Donohue had been flashing a white power sign of some sort. They were particularly concerned that producers had missed it — and that the show, reeling from the death of its iconic host, Alex Trebek, might be “in decline,” as a 2007 champion from northern Canada, Brett Chandler, told me.

Mr. Chandler was one of several letter signers I spoke to who remained convinced that the other traces of Mr. Donohue’s online presence, as well as his use of the word “Gypsy” in an earlier episode, meant he was sending a coded signal. Many said that, even as they acknowledged how improbable it seemed.

“He wouldn’t have known he was going to win three, so the logic falls apart a little bit there,” Mr. Chandler said.

The letter’s main co-authors asked not to be named because they feared harassment on social media. One, a lawyer, said in a LinkedIn message that the letter’s “overarching point is that the production staff should have headed off this controversy” by editing out the gesture. That interpretation requires a pretty careful reading of the letter, which began with a focus on Mr. Donohue and included speculation about the significance of a photograph of Frank Sinatra on his personal Facebook page.

I should stress again that these are smart people, who were in general more polite than the journalists who reluctantly take my calls most weeks. And that, I think, is the point here. The contestants’ investigations of Mr. Donohue had all the signal traits of a normal social media hunt gone awry — largely, that you assume your conclusion and go looking for evidence. And they followed the deep partisan grooves of contemporary politics, in which liberals believed the absolute worst of a Trump supporter. But they also contained a thread of real conspiracy thinking — not just that racism is a source of Trumpian politics, but that apparently ordinary people are communicating through secret signals. It reflects a depth of alienation among Americans, in which our warring tribes squint through the fog at one another for mysterious and abstruse signs of malice.

It’s also textbook social media misinformation. The sociologist Zeynep Tufekci wrote recently about the liberal blind spot on how, to put it in her academic terminology, “polarization has eaten a lot of our brains.” In the media, she writes, “there’s been a lot of focus on misinformation over there,” among right-wingers who deny the reality of Covid-19, for instance. “But then there is the misinformation over here which is also quite persistent and also wildly wrong.”

Social media turns just about everything into a kind of team sport, including analyzing the ills of social media. But we’re all easy to fool when a photograph, say, confirms what we already thought, and all our friends are sharing it. And the people who benefit from allowing instinct to stand in for evidence were, in the “Jeopardy!” case, the exact people the letter signers hated most, the trolls who first tried to turn a different innocuous hand gesture into a racist symbol, and now have us all seeing secret Nazi code on prime-time television.

The chief executive of the Anti-Defamation League, Jonathan Greenblatt, who said that he didn’t personally recognize Mr. Donohue’s hand gesture as anything in particular, told me he wished people could “pause and fact-check” before the storm erupts.

If not, you’re playing into the hands of your adversaries. “What they really want to do is to sow fear and uncertainty and doubt,” he said.

Mr. Donohue, who took home $80,601 from his three-game winning streak, didn’t respond to a request to speak; a person who did speak to him said he was trying to move on. And even as I reported on the “Jeopardy!” contestants, they considered another theory: One of their 3,000 members was leaking screenshots, and perhaps it was my brother, Emlen. When I called him to apologize for casting a cloud over his name in what is known as the trivia community, and tried to explain the fuss to him, he was puzzled. “That sounds like a QAnon story,” he said.