Twenty-five years before he was elected president, Donald J. Trump went to Capitol Hill to complain that Congress had closed too many tax loopholes. He warned that one industry, in particular, had been severely harmed: real estate.

The recent demise of real-estate tax shelters, part of a landmark 1986 overhaul of the tax code, was “an absolute catastrophe for the country,” Mr. Trump testified to Congress that day in November 1991.

Mr. Trump was sounding a theme that has made real estate perhaps the tax code’s most-favored industry.

Legislators lapped it up. Mr. Trump and his fellow real estate investors got much of what he wanted, including the ability to fully deduct losses — sometimes only on paper — against other income.

Mr. Trump’s low taxes over the years were largely a product of his businesses hemorrhaging money, according to federal tax records obtained by The New York Times. But the records also show that so-called depreciation losses and other benefits for the real estate industry have helped Mr. Trump reduce his federal income taxes. In 2016 and 2017, Mr. Trump paid $750.

From the beginning, the real estate industry, with its claim to be a bedrock of the American way of life and its formidable lobbying power and lavish campaign contributions, has held disproportionate sway over how tax laws are written.

Tax breaks for real estate have been embedded in the federal income tax law for a century. New benefits sprouted up every few years. Even when lawmakers cracked down on business-friendly tax treatment, they often made special exceptions for real estate.

“The real estate industry has enjoyed the most lucrative tax breaks for decades,” said Victor Fleischer, a tax law professor at the University of California, Irvine, and former chief tax counsel for the Senate Finance Committee. The industry “thinks of the tax code as a basket of goodies to feast on rather than a financial obligation of doing business.”

The perks come in many varieties. One allows real estate investors to avoid capital-gains taxes when they sell properties as long as they use the proceeds to quickly buy others. Another gives developers a big break on taxes when they spend money on historical preservation.

Foremost among them is a deduction for depreciation, a provision originally included in the federal tax code in response to lobbying by the railroad industry.

Taxpayers are allowed to deduct from their annual taxable income a portion of the cost of an asset such as a locomotive or a building, as well as money spent on improving that asset. If you buy a building for $270,000, you can deduct $10,000 a year from your taxable income for 27 years. A profitable business can actually report losses on its tax returns because of depreciation deductions.

The tax benefit was meant to reflect the deterioration in value over time of an asset. But for the real estate industry, it can be a boondoggle: Many buildings kept in reasonable repair increase in value over time, unlike, say, cars or computers.

Depreciation is the ultimate tax shelter, critics say, because it permits real estate investors to take deductions for spending other people’s money. If a bank lends an investor $70 million to buy a $100 million office building, and none of the principal gets repaid for a decade — a common structure for such loans — the investor still gets to deduct that $100 million over several years, even though only $30 million of that is his own money.

In 1962, Congress passed rules that made the depreciation tax break less lucrative when someone sold the asset on which they had been taking deductions. But Congress exempted real estate. 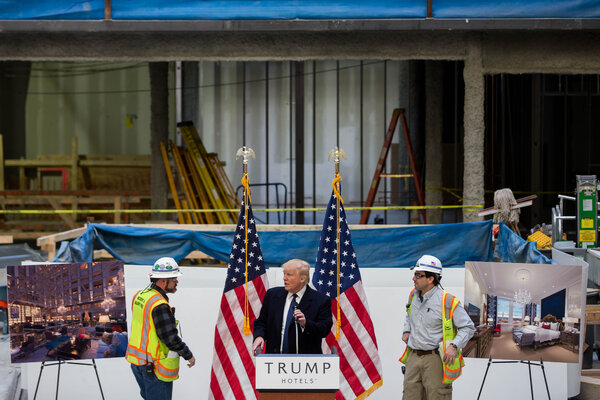 Mr. Trump has taken hundreds of millions of dollars in depreciation deductions, his tax records show.

Most but not all of his depreciation expenses since 2010 stemmed from money he spent improving his golf courses and on transforming the Old Post Office building in Washington into a luxury hotel. Some of that spending was done with nearly $300 million that he borrowed from Deutsche Bank.

“That’s Trump’s story,” said Michael Graetz, a top tax official in the first Bush administration and now a professor at Columbia Law School. “His losses are somebody else’s money.”

Mr. Trump has publicly credited depreciation with lowering his tax bills. “I love depreciation,” he said during a presidential debate in 2016.

In reality, the fact that his businesses were losing money was a major factor in reducing his taxes.

For example, for Mr. Trump’s commercial real estate properties that reported losses between 2010 and 2018, about half of the losses — $54 million — came from depreciation, his tax records show.

Jared Kushner, Mr. Trump’s son-in-law and senior adviser, also has benefited from depreciation. The Times reported in 2018 that he likely didn’t pay federal income taxes for years, largely because he took deductions from depreciation.

In 1986, Congress reined in depreciation benefits and capped the amount of losses that real estate investors could use to offset other income.

The changes were meant to combat a proliferation of tax shelters in which investors put money into real estate partnerships that, thanks to depreciation, generated enormous only-on-paper losses that then canceled out income from other sources.

“The tax shelters were out of control,” said Daniel Shaviro, a tax professor at the New York University School of Law who worked on the Joint Congressional Committee on Taxation and helped draft the 1986 law. “Every lawyer and dentist had one.”

Knowing the real estate industry would mobilize, the congressional tax committee kept the proposed changes under wraps as long as possible. The industry “was caught flat-footed,” Mr. Shaviro said. Even so, “I knew they’d get it back thanks to their raw political power.”

Mr. Trump, who blamed the 1986 law for a subsequent fall in real estate prices and a deep recession, was one of several developers who urged lawmakers to restore the breaks in full.

In 1993 Congress restored those breaks. At the same time, it carved out another advantage for the real estate industry. For most businesses, canceled or forgiven debts had to be recognized as income. Real estate investors for the most part got a pass, though they had to relinquish some future deductions. Mr. Trump has benefited from those rules, such as when his lenders canceled about $270 million of debt on his Chicago skyscraper, his tax records show.

Then Mr. Trump ran for president. On the campaign trail, he acknowledged that he had been a big winner from the tax code’s favoritism toward the real estate industry. He said his expertise on the subject would help him close loopholes and make the tax code fairer.

“The unfairness of the tax laws is unbelievable,” Mr. Trump said in 2016. “It’s something I’ve been talking about for a long time, despite, frankly, being a big beneficiary of the laws. But I’m working for you now. I’m not working for Trump.”

But Republicans’ 2017 tax overhaul, which remains Mr. Trump’s signature legislative achievement, expanded and enhanced several lucrative tax breaks for real estate developers. For example, while the law barred people and companies from avoiding capital-gains taxes by selling one property and buying another, one industry was exempted: real estate.

The law was a boon to people, like Mr. Trump, who owned golf courses. It permitted real estate investors to immediately write off the full cost of various expenses, including improvements to golf courses.

In recent years Mr. Trump has also taken advantage of a tax credit that covered 20 percent of developers’ costs of rehabilitating historical structures, which is meant to encourage the preservation of old buildings.

Mr. Trump has said that he spent $200 million transforming the Old Post Office Building in Washington, a designated landmark, into a luxury hotel. That could translate into a tax credit of as much as $40 million, which Mr. Trump could use to offset his taxes for up to 20 years. (The caveat is that such tax credits reduce a developer’s ability to take other tax deductions in the future.)

Mr. Trump’s tax records show that in 2017 he used at least $1.5 million in historical preservation tax credits. That was one of the reasons his federal income tax bill that year was only $750.

The 2017 law made that tax benefit less generous, reducing it to 4 percent from 20 percent of the rehabilitation costs. But properties opened before 2017 were exempted. Mr. Trump’s hotel opened in 2016.