McDonald’s will expand its investigation into COVID rule-breaking among staff after claims that sales competitions between restaurants are endangering health and safety.

Employees across England have contacted Sky News with serious concerns about how the chain has dealt with the winter wave of the pandemic.

They have now claimed that competitions, where restaurants try to beat each other on food service targets, have resumed and that they further jeopardise adherence to the chain’s own COVID-19 rules. 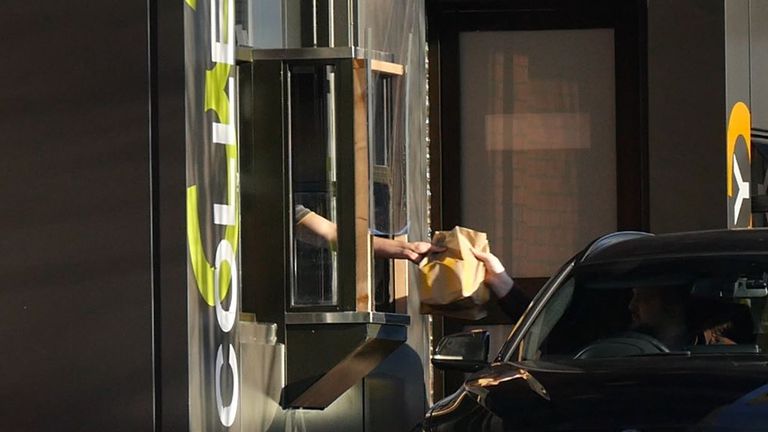 McDonald’s UK paused the sales competitions during the pandemic to enable their restaurants to prioritise safety – a policy that is officially still in place – but Sky News understands that some franchisees have recently reintroduced them.

After McDonald’s reopened following last year’s first lockdown, it also promised that staff would be able to wash their hands every 30 minutes, social distancing would be in place, and workers would have temperature checks before starting a shift.

McDonald’s workers in Greater Manchester, Merseyside and Kent approached Sky News with concerns after feeling powerless to raise the issues with local managers.

Further reports of COVID rule-breaking have now been made at restaurants in South Yorkshire, Derbyshire, Cambridgeshire and Norfolk, which McDonald’s says it will examine.

A worker who contacted Sky News from Sheffield said he had read what colleagues in other parts of the country were experiencing and felt compelled to share his story.

He said: “No manager is checking to see that temperature checks are being done anymore and very little effort is going in to making sure there is another member of staff to check people’s temperatures on entry.

“Handwashing is not being kept on top of most days and even then not all day. It will inevitably be forgotten about once it becomes ‘inconvenient’.

“We are still consistently being pushed to work fast over safe, our store has been regularly breaking pre-COVID hourly sales records.

“People are working harder than I think they ever have had to before, which is leading to most of the problems here.

“We are just too busy to deal with it and management is too focused on sales and performance instead of cleanliness.

“The implications of this are frightening and frustrating as someone who lives with someone particularly vulnerable to this disease.” 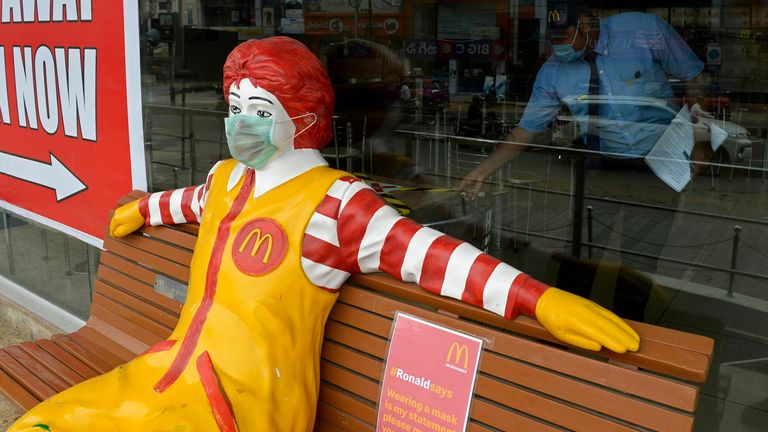 One of the original whistle-blowers who contacted Sky News from a McDonald’s in Liverpool confirmed that competitions between stores have resumed.

He said: “We did breakfast service in record times the other day and got to the top of the leaderboard – you see it on the screens that we have that show how other stores are doing.

“These leaderboards get updated every 15 minutes so you work really hard to try and get to the top during the busiest parts of the day – but nobody has washed their hands in that time.

“We did get an email quite a few weeks ago saying ‘turn these screens off’ but for our group that’s gone out of the window.

“The goal is to get to the top of your group (franchise) and then to the top three in the country – and you see the leaderboard on the screens in store – I know it’s happening in other stores in our group too.

“We currently have an Uber Eats competition too, to see which is the quickest store to do them orders too – it’s pressure, pressure, pressure – if the social distancing screens are in the way they get moved out.”

Another worker who approached Sky News in Chesterfield in Derbyshire highlighted similar concerns and said that he believed the pursuit of sales targets was reducing adherence to the rules.

He said: “We don’t get to wash hands or sanitise areas down before or during shifts.

“We do over £2,000 a hour and average 130 seconds per car round drive-through… it also means no social distancing when squeezing 40 people per shift into a space you can’t even swing a cat… just looking at the sales, McDonald’s must know we ain’t following the rules.”

A McDonald’s team member in Norfolk said: “My store tries its best to follow procedures and hand washing every 30 minutes but this is sometimes forgotten or my co-workers just can’t be bothered, which I get increasingly concerned about.”

A spokesperson for McDonald’s UK confirmed that they would examine the additional allegations and referred Sky News to an earlier statement that said: “We are deeply concerned to hear this feedback, and while we are confident this relates to a very small number of the 130,000 people we employ across the UK and Ireland, we strongly believe that every one of our employees should feel safe within the workplace.

“We are investigating the issues raised as a matter of urgency, and strongly encourage any of our employees with concerns to raise these using the various channels we have in place.”